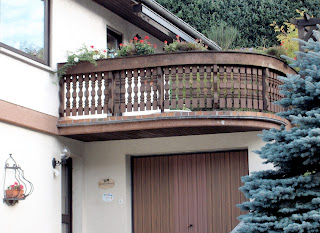 My vacation apartment's door (Erdenbach Strasse, Saarburg) is to the left of the garage door.


As I told you in September, I was planning to do some novel writing.  In the interests of home safety, I did not mention that I had reserved a vacation apartment in the city of Saarburg Germany as a wonderful way to inspire chapters for my novel.  A wise woman once told me that to improve my inspiration, I should go to my home villages, sit on the ground, and listen while they talked to me.  I'm a bit too old and my back is too touchy to do that literally, but I found that once I was in Saarburg, ideas for chapters came into my mind very easily - unlike the puzzlement I was experiencing at home.

What I hadn't reckoned with was the number of friends and acquaintances I have made in my past trips to Kreis Saarburg.  There was German hospitality being offered to me from the moment I arrived until the day before I left for home.   I had pictured myself busily writing most of my days in the city.  Instead, I was often having coffee and Kuchen.

On a sunny Sunday, I had a very special tour with a very special tour guide, Ewald Meyer, author of a published history of Irsch and Beurig.  He has been helping me ever since the first day I met him in 2002.  He was also the person who urged me to come back to Germany, offering to again help me with any local research trips I might want to make.


The tour began in the Beurig's cemetery.  Those who are not family historians will think that a strange place to begin a tour - I did not.  Beurig, about a mile from Irsch, is Ewald's birthplace.  In the Catholic cemetery I saw for myself the impressive monument to Herr Bürgermeister Bodem which I had written about in Sept. 2009, "Herr Burgermeister Bodem and his angel."  The monument was even bigger than it looked in the picture.

We also visited smaller monuments to deceased officials of the Prussian Government, such as the district foresters and game wardens.

Unlike ordinary citizens who had (and still have) only a limited number of years to own their cemetery plots, these 19th century Prussian officials still keep their grave sites and monuments in the cemetery today, even if the family line has ceased to exist.

As we drove through the village of Beurig which is now considered a part of Saarburg, Ewald pointed out Herr Bürgermeister Bodem's very impressive, somewhat Victorian-looking house.  Evidently finding favor with the Prussian government could be monetarily as well as socially and politically important.  Burdensome taxes were levied on the farmers and dayworkers, but even officials and the well-to-do didn't escape taxation.  Houses, including those of Herr Bürgermeister Bodem and his wealthy neighbors were taxed on the number of their chimneys.  Clearly, these houses were designed to show the status of their owners; men wealthy enough to have more than one fireplace.  The office of the Mayor was near the railroad station on the site of today's employment office.  The mayor's office was moved there from its earlier location in the village of Irsch in 1833, shortly after Herr Bodem was appointed Bürgermeister in 1832.


As I described in my July post, (From Bishop's Crosier to Napoleonic Flag), before the time of Napoleonic and then Prussian rule, the farmers, craftsmen, and day workers of Irsch, Beurig and the surrounding villages were governed by the Prince/Archbishop Electors of Trier and then Koblenz.  I had known that the peasant classes paid their "taxes" in the form of produce and farm animals, but not the specifics.  Herr Meyer explained that after the harvest, usually around St. Martin's Day in November, about 10 per cent of a farmer's crops and animals were sent to their Archbishop.  Wagon loads of "taxes" from the villages of the area were sent to the church estate at the edge of the Saar where today's Hotel Keller stands.  There they were housed until they could be sent, by barge, to Trier or Koblenz--depending on the location of the Archbishop Elector of the time.

In a year when the harvest was very bad, the peasant farmer paid his dues in the form of Frondienst; that is, as enforced service to a Fronherr or lord in lieu of produce.  Probably in this region, the "lord" was a high official of the church or the manager designated by the abbot of a monastery.

From Beurig, our tour went on to the Catholic Church in Irsch.  The newly refurbished church retains an altar from the 19th century to one side, but the main altar is modern. Several statues from my ancestors' time also remain in various locations in the church.

Back on our tour, Herr Meyer pointed out a raised plateau just outside the city limits call the Feuerstatt.  That innocent-looking field was the place where four people accused of witchcraft and found guilty by the Catholic church inquisition, were burned in the 1630s.  One of the women was a midwife.  She would also have used herbs and potions to try to heal disease, making her a prime target for stories of sorcery and probably blamed for the illness or death of a fellow villager.  None of those burned were from Irsch; three were from the small wine village of Filzen and midwife Barbelen came from Kommlingen.

We peered at the buildings in the oldest part of the village, known as An der Wey, with narrow streets that resemble alleyways.  Here and there, parts of out-buildings made of lime, stones, dab and wattle, have stood the ravages of time and are now combined as part of later reconstructions.  It is a blending of old and new that testifies to the age of the village, which shows up in records as early as 957.

We also drove through the district of Irsch which at one time was a separate section known as Biest.  It was larger than Irsch until the fire of 1842 in which the area was almost totally destroyed and was rebuilt as a part of Irsch.

As with all tours, an end comes.  But I was luckier than most tourists.  I was to have "a coffee" with my tour guide.  I was invited to the Meyer home where Helena Meyer waited to welcome me.

Above is a fruit torte (grapes, mandarine oranges, and raspberries), baked and served by Helena Meyer after our afternoon tour of Beurig and Irsch.  It was as good as it looks.

If I could, I would appoint Herr Ewald Meyer as the official historian and tour guide for the villages of Irsch and Beurig and Frau Helena Meyer as a five-star baker of Kreis Saarburg.