Railroad Travel Then and Now 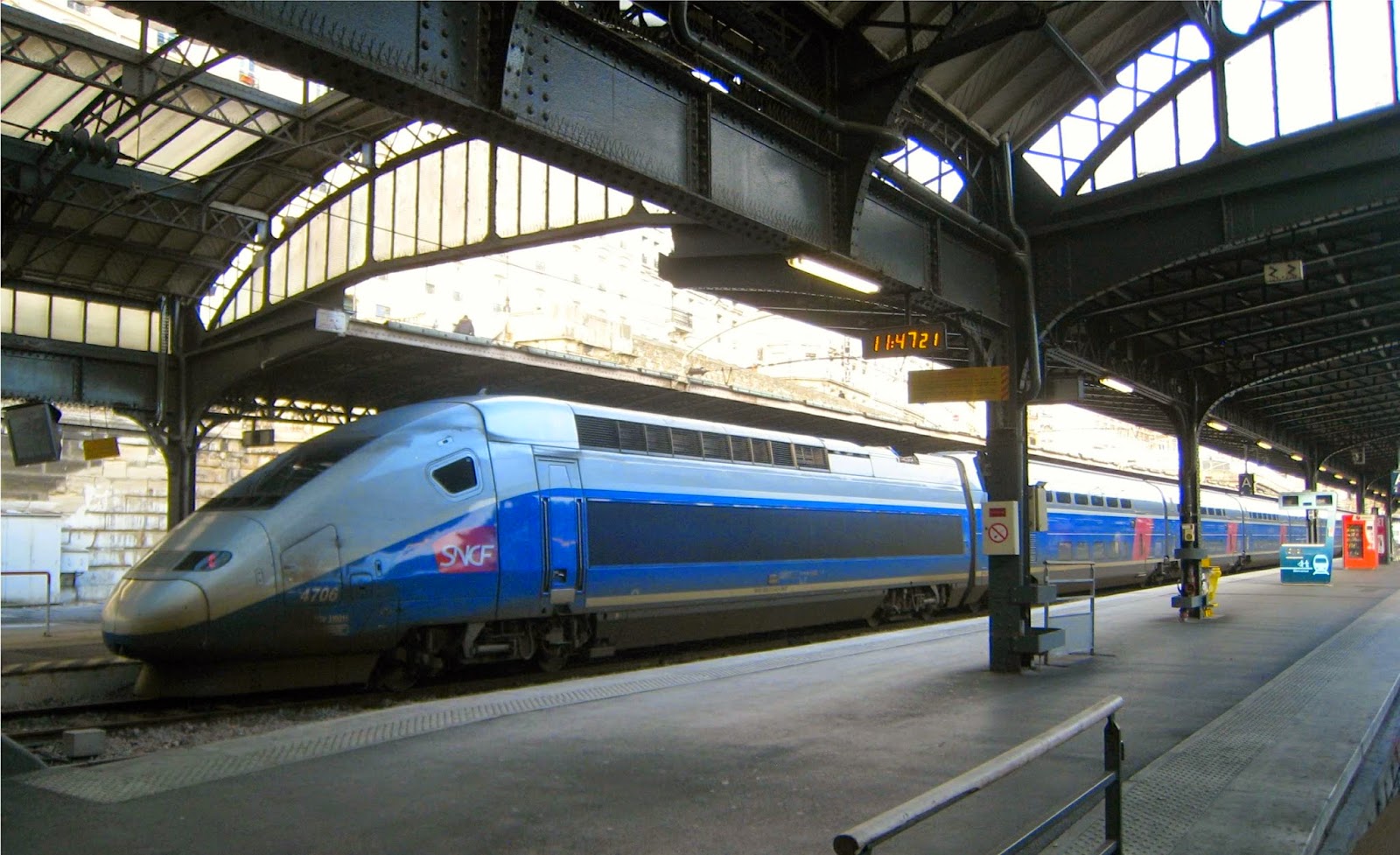 This year I was granted my wish to spend Christmas together with my sister and cousin.  Our Christmas day was spent in an exciting location, Rouen, France.  The three of us had booked a Christmas cruise on the Seine River from Paris to Rouen.  During our trip, we also allowed time for a special day in Germany.  We took a train to the German Christmas market in Saarbrucken, Germany.

Saarbrucken is about 300 miles from Paris.  By taking the fast (200 mph) French TVG train, we could go one way in less than two hours.  It was our first experience with Europe's high speed rail service, and we came away impressed by this experience.  Nothing like it is readily available in the United States.  We had comfort, convenience and amazing speed, all available at a reasonable price.

A Train Trip in 2014
Why am I writing a post about my Christmas vacation and trains?  Because the railroads played such a major part in the emigration of all of my ancestors - and probably yours.  I was traveling back along part of a train route which my great-great grandparents also traveled as they left Europe for a new life in Wisconsin.  I was returning to their former homeland area - and in great comfort.  I had no luggage to carry and barely felt the motion from the train wheels which seemed to almost ride above the rails.  It was as easy to walk down an aisle of the train as it had been to walk down the aisle flying to Paris in perfect weather. The return trip to Paris again took less than two hours.  We sat relaxed in well-padded, adjustable seats and also had a table to hold our snacks and drinks.  Some other passengers used their tables for laptops or to play cards. In what seemed like no time at all we were back in the Paris train station.


A Train Trip in the 19th Century
This was not the way my 2nd great grandparents, Johann and Magdalena Meier, made the trip by train.  Almost certainly they had brought a large trunk with them, and I'm guessing that they carried sacks or baskets filled with necessities such as food to be eaten during the trip.  They had to keep track of four children ages 10 years to 18 months.  The train was coal fed, and I have read that the locomotives belched coal smoke back into the passenger cars.  The seats were of wood and every movement of the train on the track could be felt, rocking their bodies and even landing them on the floor if the train had to come to an unanticipated stop.  Still, the train that carried them was as impressive to them as was the one on which the three of us traveled last month.

Some train history:  By March 1861, my ancestors' emigration month, the railroads already were crisscrossing Germany. In 1852, the completion of a rail line from Forbach (very near Saarbrucken) to Paris made it much easier for emigrants from parts of Bavaria, southern Germany, and Switzerland to reach the French port of Le Havre by rail.

On May 25, 1860, the railroad line connecting Trier with Saarbrucken was officially opened, reaching as far as Forbach. The emigrants from the Trier/Saarburg area could, for the first time, get to the port of Le Havre in France entirely by rail. Prior to that time, the usual route was by land and barge to Antwerp.  The difficulty of traveling to America obviously started long before the emigrants set sail on the ocean.  By the time they reached their port of emigration in Le Havre, Johann and Magdalena Meier and their four young children had ridden on three different but intersecting rail lines: Saarburg to Forbach line, Forbach to Paris line, and Paris to Le Havre line.

The transfer between the train from Forbach to Paris and then from Paris to Le Havre was the most intimidating.  The emigrants had to navigate the city streets of Paris.  Travelers from Forbach arrived at the Gare de l'Est station.  However that was only one of several railroad stations in the city.  To this day Paris has no central rail station.  Even in our age of high speed rail travel, passengers who arrive at Gare de l'Est (the station for trains to and from the east) trundle their luggage from the Gare de l'Est to Gare Saint Lazare in order to get to the train that will take them to their vacation spot on the Normandy coast.

Johann and Magdalena and emigrants like them had to have some means to get their trunks and other possessions (including children) through the Paris streets to that second railroad station.  I have not found any information on how that process was actually handled.  The most likely scenario I can imagine would be that the emigrants had to pay to hire a wagon to take their trunks for them.  Did they know about this difficulty when they bought their train tickets?  I have not found such information.

Most of the emigrants arriving in Paris had never been in such a huge city. They must have gazed in awe at the Paris of 1861, which was still being reconstructed into the Paris of today using the dramatic plan of Georges-Eugène Haussmann who was tearing down much of old Paris with the permission of Emperor Napoleon III.  Some emigrants probably traveled through a construction zone of some kind.  Upon finding the Gare Saint Lazare, another trip of approximately five hours awaited them before Le Havre harbor was reached.

It took my sister, cousin, and me one hour and 50 minutes to travel from Paris to Saarbrucken. A very rough estimate of the time it took my ancestors to complete that same part of that trip is about 10 hours of actual time when the train was moving and not stopped in a station.  How many stops were involved could change that calculation considerably.  A second estimate of their total time from Saarburg to Le Havre, using my less-than-ideal manner of calculating, would be at least 18 hours and does not take into consideration any time spent waiting for the next train connection or crossing a part of the city of Paris.

The French website developed by the Historical Association of Triel has a chart that shows a train schedule from Paris to Le Havre in 1849 and a multitude of stops.  Another quote from the website: "The advent of the railway in the early nineteenth century has revolutionized communications between people by reducing an unimaginable journey time. For example, to get from Paris to Le Havre, it took more than 30 hours in 1814 and only 5 hours by train forty years later."

It just goes to show that the term "high speed" is in the mind of the one who experiences it, whether traveling in 1849 or in 2014.

Posted by Kathy, the Single-minded Offshoot at Friday, January 30, 2015