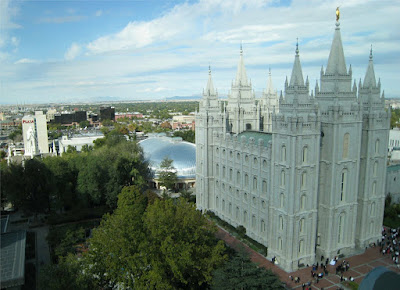 Church of Jesus Christ of Latter Day Saints Temple in the foreground, the Tabernacle in the center, and our hotel (the Plaza) and the Family History Library at the far left (Photo by Carole Kortenhof)


Eliminating possibilities - that's mostly what I did during my stay in Salt Lake City last month. I can't complain, or course, because previous visits have given me the names and stories of my ancestors from Irsch, Zerf, and Serrig in Kreis Saarburg. By now, though, I am seeking bits and pieces, looking for hints to collateral line relatives whose success at hiding from me could stymie Sherlock Holmes himself.

One interesting snippet that I discovered was from The Antwerp Emigration Index by Charles Hall. I had never paid much attention to it because it covers only one year, 1855, and only one port. This time I picked it up on the offhand chance that it would help me solve a mystery that so far has me totally frustrated.

I am searching for the younger sister of my 2nd great grandfather, Johann Meier. When he emigrated in 1860, he told the Mayor of Beurich, who was taking his application, that he was going to America to improve his life and that he already had two brother-in-laws in America. One brother-in-law was Matthias Rauls, the brother of Johann's wife, Magdelena. The other had to be the husband of his sister Anna. Unfortunately, Anna did not marry in the parish church of Irsch, her home parish. It's possible that she married in her husband's parish and then the two left for America. It is also possible that she decided to emigrate when she was still single and left before any real emigration records are available, marrying somewhere in her adopted homeland. Thus I don't know if I am searching for Anna Meier or Anna _______. Complicating my life is the fact that emigration records from the Trier area before 1856 do not seem to have been kept.

After searching for Anna's marriage record in the parishes neighboring her home village of Irsch and finding nothing, I decided to see if the 1855 Antwerp Emigration Index showed any trace of her. Once again, no Anna Meier. But what I did find delighted me. In that year, 37 residents of Zerf/Frommersbach left Antwerp for America on the ship Daylight.
I have a 662 page book about the history of Zerf (in German) and it lists all of the emigrants who were found in emigration documents filed in the Koblenz Archive. Not any of the thirty-seven passengers on the Ship Daylight are named in that history. So even though I did not find anyone I was looking for, I'm able to write my own personal addendum to "Der Hochwaldort Zerf am Fuße des Hunsrücks" by Edgar Christoffel. And I'll keep looking for Anna.
We know that people from the Rhineland began to emigrate in the 1840s. Passports were issued at that time, but the Archive at Koblenz does not have the paperwork which made those passports possible to locate for the Trier and Saarburg region. It was not until about 1857 that a systematic effort was undertaken to keep emigration papers.
Before the completion of the Trier to Saarbrucken railroad in 1860, Antwerp was the most accessible seaport for emigrants leaving the Trier and Saarburg area for other countries.
According to the introduction to the book, The Antwerp Emigration Index was extracted and compiled by the non-profit organization, Heritage International. “It deals with emigrants from Germany, Switzerland, Italy, Belgium, France and the Netherlands…There are in excess of 5,100 immigrants whose origins are given here.“ Heritage International used the passenger records of 38 ships which left the port of Antwerp in the year 1855. “…Destinations of the emigrants were New York, Boston, New Orleans, Rio Grande & Australia.”
Unfortunately, the researchers did not give the destination of each one of the 38 sailings (most of the ships sailed two times from Antwerp to their destination), nor did they give sailing dates, except that they gave each ship a number according to its first departure date of the year. The Zerf emigrants were on Ship No. 28, the Daylight. It left Antwerp during the last third of the sailing season and yet this was its first sailing from the port of Antwerp.
The passenger list information furnished in the Antwerp Emigration Index gives: 1. Passenger Name 2. Age 3. Place (whether of residence or birth is not clear) 4. Ship Number 5. Place Where Passport Was Issued. (These were people who were emigrating legally and almost all of them had a passport that was issued in Trier)
Aboard the Ship Daylight
1. Johann Allmescheid, age 57, from Oberzerf
2. Mary Allmescheid, age 51, from Oberzerf
3. Johann Baermohen, age 28 from Zerf
4. Johanna Baermohen, age 39 from Zerf
5. Nikolaus Bernardz(y), age 26, from Oberzerf
6. Susanna, Brixus, age 44, from Zerf
7. Johann Peter Christ, age 52, from Zerf
8. Gert. Christ, Gert., age 47, from Zerf
9. Matthias Eiler, age 53, from Zerf
10. M. Eiler, age 50, from Zerf
11. Matthias Lillig, age 37, from Zerf
12. Sus. Lillig, age 40, from Zerf
13. Johannes Lillig, age 39, from Zerf
14. Margaretha Lillig, age 37, from Zerf
15. Michael Maier, age 32, from Zerf
16. Sus. Maier, age 33, from Zerf
17. Johannes Maier, age 56, from Zerf
18. Helena Maier, age 47, from Zerf
19. Nic. Merz, age 48, from Zerf
20. M. Merz, age 43, from Zerf
21. Jacob Muller, age 58, from Zerf
22. Johannes Muller, age 38, from Zerf
23. Cath. Muller, age 42, from Zerf
24. Joh. Muller, age 39, from Zerf
25. Moore Muller, age 48, from Zerf
26. Joh. Palm, age 57, from Frommersbach
27. A. Palm, age 57, from Frommersbach
28. Johannes Schneider, age 39, from Zerf
29. Barb. Schneider, age 39, from Zerf
30. Nic. Schneider, age 53, from Zerf
31. Johannes Schommer, age 42, from Frommersbach
32. A. Schommer, age 36, from Frommersbach
33. Math. Schwindling, age 53, from Zerf
34. Cath. Schwindling, age 56, from Zerf
35. Pet. Schwindling, age 30, from Zerf
36. Susanna Schwindling, age 27, from Zerf
37. Johannes Wagner, age 58, from Zerf
A few random thoughts about this boatload of Zerf villagers. The average age of the emigrants was 47.7 years old and 30 per cent of the emigrants were over 50. And something seems to be missing - no children are listed - and I have no explanation why!
Posted by Kathy, the Single-minded Offshoot at Sunday, November 02, 2008