The Government Bureaucracy and the Immigrant Ancestor 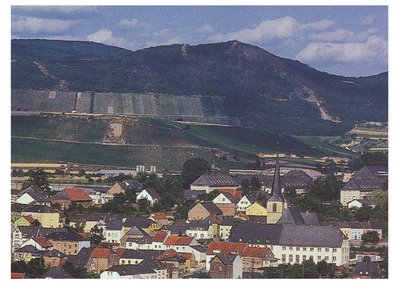 Beurig, once a village with its own mayor, is today a part of the city of Saarburg

In October, 2004 I went to the Landeshauptarchiv Koblenz Archiv in an attempt to locate a copy of the passport for my great-great grandfather and his family who left Irsch in 1861. While I didn't find the passport, I had the chance to gently handle the actual immigration documents that were handwritten by the Burgermeister of Beurig/Irsch at the time of application; a rare opportunity that I will always treasure. These documents, along with hundreds of others from the Saarburg district, were bound in a volume that spanned the time period from January of 1859 to May of 1862. (Earlier and later volumes of application papers are also held at the Archive).

As I turned pages in the leather-bound book of applications, I confirmed that within the space of a few weeks in February and March of 1861, thirty inhabitants of the village of Irsch, including my 2nd great grandfather and his family, were granted permission to emigrate to America. These thirty people would soon travel together to Wisconsin to begin a new life in an unknown land. The men were also officially renouncing their Prussian citizenship. They were ready to take an enormous risk to improve their lives and the futures of their children.

WHY DID SO MANY LEAVE?

According to historian J. Bellot, the first half of the nineteenth century was a time when economic conditions in Germany were very bad. Wages were miserably poor and prices were rising. Factories were replacing the handworkers, and before 1850 there was already heavy migration out of the Trier and Saarburg districts.

Many chose to find a place where they could have land of their own and to be free from high taxes, especially the Klassensteuer of the Prussian Government. The Trier district also had exceedingly high church assessments from 1857 onward.

Then there were the "agents", men who promised to facillitate the trip. Some of these travel agents were honest; others were not. And a few of the agents in Germany were actually sent by the State of Wisconsin to find settlers to populate the state. They carried with them a pamphlet published in 1848 by German immigrant Carl De Haas. It was called NORTH AMERICA WISCONSIN; HINTS FOR EMIGRANTS. It had been written by Haas to help others who were considering the same trip he had made. Haas pointed out that Wisconsin had cheap land available - it was sold for $1.25 an acre in most cases - and Wisconsin was the first state in the Union to require just one year of residency to become a citizen (LeVern Rippley, OF GERMAN WAYS).

"America letters came from relatives or neighbors who had left their villages in the 1840's and 1850's. There were stories of cheap land, good crops, and success. In this 1846 letter, an immigrant writes to his relatives in the Rhineland from someplace near Milwaukee, Wisconsin: "Immediately I found land to purchase...I purchased a piece of property of 40 acres, which is the same as 55 Prussian acres. On this property stands a house and two pig stalls. Along with this we also received two beautiful oxen, one cow, one steer, eight pigs, eight chickens, the oven with which we cook and bake, one bed, one cabinet, one grindstone, and all farm equipment...We also got a garden, a beautiful garden, which had all kinds of beautiful plants...The beautiful melons were a special joy for me...We have enough here to live in abundance. It is a peaceful and contented life. No tax-collectors. Come here!"

By 1861 the railroads were crisscrossing Germany. Already in 1852, a rail line from Forbach (near Saarbrucken) to Havre made it easier for the emigrants from the Saarburg area to reach an Atlantic port. (Mergen, Josef, Die Auswanderungen aus den ehemals preussichen Teilen des Saarlandes im 19. Jahrhundert). On May 25, 1860, the railroad line connecting Trier with Saarbrucken was officially opened. The immigrant from the Saarburg area could finally reach the port of LeHavre in France entirely by rail. (Hammaecher, Klaus, SERRIG: LANDSCHAFT, GESCHICHTE & GESCHICHTEN, Saarburger Satz & Druck GmbH, Saarburg, 2002)

By the 1860's, the steady flow of emigrants to America was causing government officials to worry. They had assumed that the majority of immigrants would be day laborers and small farmers who teetered on the edge of destitution. There was, they had thought, little to be gained by trying to retain these people and then support them if they became improverished. But many of these first immigrants found that they could flourish in their adopted country; and they wrote to their relatives, encouraging them to leave Germany too. Hard-working, ordinary farmers and craftsmen began to leave the Rhineland in increasing numbers. In some villages, up to a third of the population had emigrated by the 1870's.

As they watched this "out wandering", government officials finally realized that the men who paid taxes and provided stability to the economy were being lost at an alarming rate. Hoping to stem this tide, the Prussian government prepared a standard list of warnings and advisements. The local mayors were required to read them to each person requesting permission to leave the country.

A typical interview between a resident of the village of Irsch or Beurig seeking permission to leave the country and Burgermeister Nicholaus Bodem of Beurig might proceed something like this:

Burgermeister Bodem would probably ask the applicant to give his - or in some cases, her - reason for wanting to renounce Prussian citizenship in order to go to a new country; then record the answer. The Burgermeister would next read from the the official list of warnings. He would caution the applicant that not everyone found a good life in the new country; some were cheated badly and found themselves living in poverty. If life in the new land is not successful, he would say, you will no longer be a Prussian citizen. You may not be allowed to return to the home country. (Because of the time period in which my great-great grandfather applied for his passport, he was also cautioned that the United States was dangerously close to a civil war that might make travel within America dangerous or even impossible).

If the applicant persisted in requesting permission, the mayor asked for the details of his financial situation. The applicant had to give proof that he had no debts or fines. He had to document that he had completed his military service. Finally, when all seemed to be in order, a fee of 15 Silbergroschen, was paid. Burgermeister Bodem would end the session with the following advice. This advice, like the warnings, was required by governmental order.

1. Use the regular immigration office in Köln or Koblenz and do not trust underhanded agents in setting up travel.

2. Keep a record of payment of any bookings made so as not to have to pay a second time

3. Get explicit statements in the contracts with shippers or other persons regarding the voyage so that all is clear and so that help can be obtained from the Prussian consulate if difficulties arise.

4. Be watchful at the harbor for anyone trying to entice emigration to a South American country where slavery will probably result.

It took from 14 days to four weeks for the documents of dismissal to be processed. Once the document had all the necessary signatures, the prospective immigrant was given his travel pass and allowed to begin preparations for his journey. He had become a foreigner in the country he had so recently called his homeland.
Posted by Kathy, the Single-minded Offshoot at Sunday, April 09, 2006