Pilgrimage to the Holy Robe in Trier 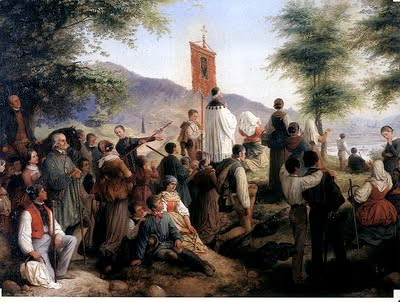 Next year from April 13 to May 15, the Cathedral in Trier will open the Chapel of the Heilige Rock.  The Heilige Rock is thought to be the garment with no seams that Christ wore on his way to Calvary. The exposition of the Holy Robe is a special time and thousands of faithful come to the Trier Dom where it is housed in the special chapel that is only rarely accessible to the public. The last actual Heilige Rock pilgrimage was made in 1996. 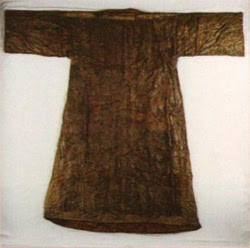 The Holy Robe is the most important relic held in the Trier Cathedral. According to tradition, the Empress Dowager Helena, mother of Constantine the Great, brought the seamless robe of Christ to Trier. There is no exact verification of this since the Holy Robe is first mentioned in a document from the 12th century when it was moved from the west choir of the Cathedral to the new altar in the east choir in 1196.
The time between the showings of the Heilige Rock has varied over the centuries. The first showing was at the time of the dedication of the new high altar of the Cathedral in 1512.  Pilgrims saw the Holy Robe held high for their veneration, when for several days the garment was taken from its storage place behind the altar and held out for the people to view.  Following this pilgrimage, once a year from 1513 to 1517, another pilgrimage occurred.

There were only four occasions for such pilgrimages in the 16th century and then, most likely because of historical events like the 30 Years War and successive smaller wars, the garment was removed from the Trier Cathedral several time to the fortress at Ehrenbreitstein, near Koblenz, to secure its safety and the pilgrimages stopped.  When Napoleon attacked the city in 1794, the garment was taken to the interior of Germany for safety and kept at Augsburg.  This, however, caused the Bishop of Trier to have difficulty negotiating its return.  The garment was restored to the Trier Cathedral in 1810.  In celebration of the return, a pilgrimage to the Dom was made by the faithful from many parts of Germany. 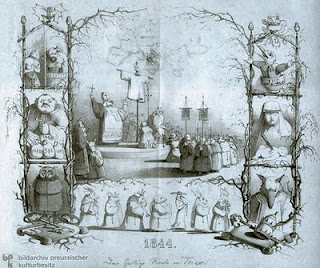 In 1844, when the Holy Robe was next exhibited, masses of people, some sources say a million, reverently came to see it, including those from Zerf who were led by their priest, Father Matthias Guckeisen. In these years of the 1840s, when there was extreme poverty and disease in Zerf and the surrounding area, the strong Catholic faith of the people put their trust in God by making a pilgrimage, praying for improved conditions.


In 1891, Pope Leo XIII granted pilgrims who participated in the pilgrimage a plenary indulgence, which brought almost two million people to the Trier Cathedral for the celebration.
Since the time of the Cathedral renovation in 1974, the Holy Robe has been kept in its wooden shrine, which was built in 1891.  It lies under an air-conditioned glass, where only a glimpse of it can be seen.  The entire garment can no longer be viewed. The original state of the textile has altered too much to allow for full viewing because of the past events and the unfavorable storage conditions .

The last pilgrimage, held in 1996, was estimated to have brought over a million people to Trier.  Since then, annual Holy Robe Days have been held at the Trier Dom. Only during the Holy Robe Days is the Holy Robe chapel of the Dom accessible.
The painting by August Gustav Lasinsky at the beginning of the blog, as well as the line drawing in the content itself, record the famous pilgrimage of 1844. The Lasinsky painting, done in 1847, is a good representation of the clothing worn by the people of the area at that time.  Be sure to click on the picture two times to compare the clothing of the lower and the middle classes.
Sources:
Edgar Christoffel, Der Hochwaldort Zerf am Fuße es Hunsrücks, 1981
Trierer DOM web page - www.dominformation.de
Catholic Encyclopedia - http://www.newadvent.org/cathen/07400b.htm
Posted by Kathy, the Single-minded Offshoot at Saturday, September 03, 2011