The Apples of the Kaiser 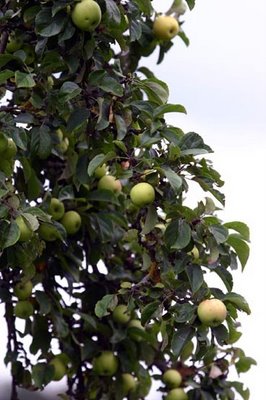 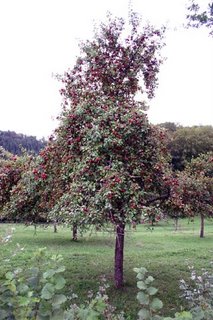 Once there was a nine-year old boy who lived in a small village near the Saar River. One day he decided to steal from the Kaiser's orchard. He made his way to the orchard and was gathering up apples when he heard someone coming. Quick as lightening, he flattened himself under a bench and hid. When he peeked out of his hiding place, he saw that the Kaiser himself was looking for him. "Where is that young rascal? I'll give him a beating when I catch him," the Kaiser threatened and shook his fist. After the Kaiser gave up the search, the boy jumped up and ran home as fast as his legs would carry him.

Many years later, Mathias Meier, my great-grandfather, told this story to his grandchildren. They were second generation Wisconsinites and at least one of them, Aunt Rose, was very impressed. She always remembered the tale; and when I began asking questions about the Meier family history, she told it to me.

I smiled to myself when I heard this story. Irsch had less than 1,000 residents in the late 1850's, and I didn't think that Kaiser Wilhelm had time to check all of the small apple orchards in Prussia, not even occasionally. Great-grandpa was a pretty inventive storyteller, I said to myself.

Over the years I became curious about the orchard in Irsch and the kind of apple that great grandpa was trying to steal. I asked my Trier relative, Edeltrud Heiser, if she remembered an apple orchard in Irsch when she was growing up. "Oh yes," she said. She told me that the orchard still stood in Irsch when she was a child but is gone now. But she couldn't remember what kind of apples grew in it. So I started to tell her the story about great-grandpa and the Kaiser's apples. "That's it," she said, before I could finish the tale. "My father said there were 'Kaiser apples'."

So whether great-grandpa was an imaginative story teller, or whether Aunt Rose didn't quite understand that the apple was the "Kaiser" and a local caretaker was the one who tried to give little Mathias a beating, I'll never know.

I e-mailed the story of the Kaiser's apples to Ernst Mettlach who grew up in the Trier area. As usual, he had a wealth of information and was very generous about sharing it. When I got his return e-mail, I knew that I had a great topic for a new post (with his permission, of course).

Ernst said it is highly unlikely that the German Emperor had his own orchards in the Saar region, since his capital city was Berlin. And if he had an orchard, it would have been guarded not by the emperor himself but by his hussars.

He told me that there are several varieties of apple named after a Kaiser. In the past there was hardly an orchard without a "Kaiser Wilhelm" or a "Kaiser Alexander" apple tree. Therefore these two types of apples probably became known just as "Kaiser" or "Kaiserapfel". 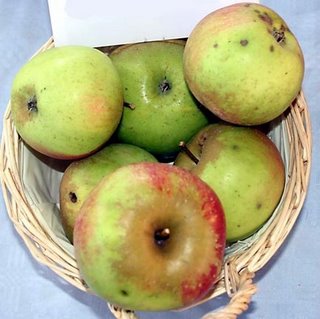 The "Kaiser Wilhelm apple is a big, round apple, quite pretty to look at. It is not an eating apple; it is used for cooking. This apple wasn't common in the Trier area until about the last third of the 19th century. Since the Meier family left Irsch in 1861, the "Kaiser Wilhelm apple was probably not the kind my great-grandpa coveted when he made his foray into the orchard. 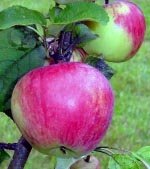 The Kaiser Alexander apple, said Ernst, goes back to the 18th century. It may have been imported from the Ukraine in Russia, since Alexander was the name of so many Russian Czars. The tree is known for its ability to survive in harsh climates and was often planted in the higher parts of the region, for example in the Saargau, high above the Saar Valley. It was a tasty eating apple, harvested in September and lasting in storage until December. To me, this kind of apple seems to be the most likely object of great-grandpa's hankering.

Ernst gave me additional information about the regional apples and orchards. He says that in the 1930s more than 130 different apple species were cultivated around Trier. There were sweet, sour, bitter, big, small, soft, hard, red, yellow, orange or flamed apples. There was an apple for every purpose, for eating, distilling, baking, cooking or making cider. The apple was the bread-and-butter fruit of the Trier region and more important than wine. Today, most species are gone. But in his mother's time, the apple trees stood so dense that in springtime, when the apple trees were blooming, it looked like snow had fallen. The apple was so important that some villages have it in their coat of arms, and there are poems and songs about the apple. There was no village without apple trees.

In the past, the apple trees grew in what was called the "Streuobstwiese" (literally a 'straw fruit meadow'). All over the region, apple trees and other fruits like plums, etc. grew in these special pastures. The apple trees had very tall, knotty tree trunks; a traditional apple tree looked a bit like a very old man. The Streuobstwiesen gave habitat to a lot of species of animals and plants, and they were very typical in the region. The orchard floor was used by the cattle as pasture, the trees produced fruit and gave refuge to several species of birds like little owls (Athene noctua).

Most orchards were cleared when farming was industrialzed. In the 80s, the European Union paid money for every acre cleared of trees. Less than one-third of the traditional apple trees survived. Today people are recognizing that the apple tree is part of the region's culture; and they are beginning to save the traditional orchards. 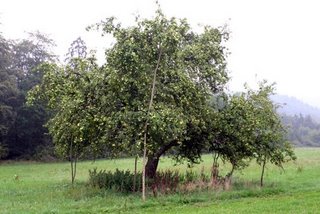 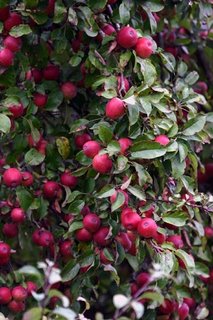 An old farmer from Aach, the village where Ernst's mother's family comes from, refused to cut down his old apple trees. The most traditional apples in his orchard are the "Roter Trier Weinapfel", and the "Weisser Trierer Weinapfel". The Weisser Trier is said to be the closest relative of the European wild apple (malus sylvestris). Both the red and the white varieties are used to make "Viez, the regional name for hard cider. The apples are small, hard  and very sour. They are sometimes called "Holzapfel", "Roter Trierer", "Weisser Trierer" or simply "Viezapfel".

If you've been drinking red wine as a heart-disease prevention method (or just for the pleasure of it), here is something to think about. Ernst says that one liter of the region's traditional homemade apple cider contains 3,500 milligrams of flavonoids. One liter of red wine contains around 280 milligrams!
Posted by Kathy, the Single-minded Offshoot at Tuesday, October 24, 2006