Once Upon a Tree

Late autumn was the time of the year when our ancestors, especially the women of the villages in the Trier, Saarburg, and Hochwald regions, were preparing for winter. Before the cold and snow descended on the Saar Valley and the Hochwald, each family had to ready itself for the months when there would be no more available fruits, vegetables, or herbs in the gardens, orchards, or on the open land and the hillsides. They would preserve whatever was available to them, both for sustenance, for pleasure, and for healing.

In this post and in another to follow, the trees, bushes, plants and herbs - both cultivated and wild - that were so familiar to our ancestors, take center stage once again. Their vegetation helped our ancestors make their way through the winter season when the land was barren.

The Generous Trees and Bushes of the Trier/Saar Region

*The blackthorn or Schlehdorn is a very important plant in the Trier region and is primarily used for distilling a famous schnapps, for marmelade and for medical purposes. The blackthorn grows wild in the hedges that protect the fields from wind. The berry, called a sloe or Schlehe in German, is small and so sour and acerbic that you can`t eat it as it is. The berries sweeten somewhat after a winter freeze. The bush is well fortified by thorns; harvesting the sloes could be painful as well as slow work.

*The elderberry or Schwarzer Holunder is a native plant to the Trier area. It was considered a holy tree by the ancient Germans. It grows wild, sometimes as a bush, sometimes as a tree over 30 feet high. It has beautiful, luxuriant white flowers which turned into berries by autumn. (If you dip the blossoms in a pancake-type dough and fry them, then sprinkle them with surgar and cinnamon, you have a delicious treat). In the autumn, the berries would be gathered and used to make a syrup (sometimes mixed with apple) for drinks, marmalade or jelly. The syrup was also used as a cough medicine. Last but not least, elderberry liquors could also be made from the berries. An old farmers' saying in the Hochwald: "A man takes off his hat for the Holunder."

*The  Eberesche or European Rowan(Sorbus aucuparia), which is known in Germany as the Eberesche, or Vogelbeere, was very common to the region and often grew, as does the elderberry, in the hedges that enclose the fields. The berries are edible, but too sour to eat raw. In years gone by, it would have been used for making a Vitamin-C-rich marmalade. In some parts of Germany the berries were distilled. But now the berries are mostly a food for the birds rather than a source of food for hungry households.

*The beach nut tree, Buche, was another important tree in days of old. The beach nut or Buchecker was food for the pigs that were driven into the forests in summers past. During bad times, the beach nut was human food as well, and the oil of the nut could be pressed out of it.

*The walnut tree(Juglans regia) was well known; it grew everywhere. Every farm had its walnut tree in days past. This tree was brought to the region by the Romans.

*The *sweet chestnut (Castanea sativa) was also brought by the Romans. The edible chestnut, called Keste (fruit and tree) in dialect, did not grow everywhere; but could be found around the city of Trier or anywhere there was red sandstone. The chestnuts were gathered and then roasted or cooked. (They are very good partnered with sweet Viez or the new, sweet wine). During times of famine the sweet chestnut was used as an ersatz flour. 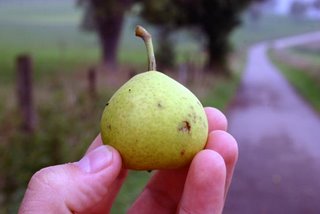 *The Sievenicher Mostbirne" is a very traditional tree of the region. Its fruit cannot be plucked from the tree and eaten as a fresh fruit because it is very sour. But the pears can be used for distilling and when mixed with quinces, the Sievenicher Mostbirne makes flavorful, delicate jellies and marmalades. 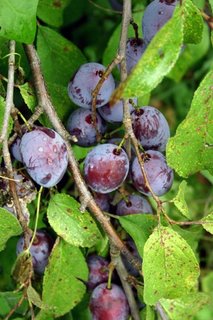 *The Zwetschge (Prunus domestica subsp. domestica), is very important in the region. In the Trier dialect it is Quetsche, in English a damson, which is a small, purple plum.  The tree on which it grows looks quite similiar to the apple tree and very often occupies the same orchard. The damson is distilled, giving a schnapps called Quetschenwasser. A delicate marmelade or mush is produced from it, spiced with anise seed and cinnamon. In autumn, when the plums are harvested, they are the used to make a delicious coffee-type cake which is very typical for the Trier region and is called "Quetschekooch" in dialect. 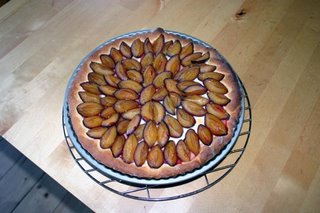 Cakes made with yeast are traditional for the region and no autumn goes by without Zwetschgenkuchen. Here is a recipe from Ernst Mettlach, and my effort at converting the measurements to the US system:

You need Zwetschge plums cut in fourths or, if they are small, in half.
20 grams yeast (3/4 oz)
250 grams flour (scant 9 oz.)
100 mililitres Milk (about an oz.)
1 egg
60 grams melted butter (about 2 oz.)
50 grams sugar (1.8 oz)
a little salt.
Sieve the flower into a bowl and form a hole in the flour. Put the yeast in the hole and sprinkle a spoon full of sugar on it, then add 2 or 3 spoons full of lukewarm milk. With floured hands, mix into a dough and let then let it rest for 15 minutes. Mix the egg and the rest of the sugar until its foamy. Add the salt, the rest of the milk and the butter. Knead everything together and let it again rest for 20 minutes. Then knead it again, roll it out on a board covered with flour, put in a cake form and wait 20 minutes more. Then lay the plums on the dough, and put the "Quetschekooch" in a pre-heated oven (350 degrees Fahrenheit) and bake it for about 45 minutes. If the plums are sour, sprinkle them with sugar. Serve with whipped cream.

The *cherry tree; and *the mirabelle plum tree were also found throughout the region.

Information from Ernst Mettlach and from the book "Die Hunsrücker Küche" by Christiane Becker
Posted by Kathy, the Single-minded Offshoot at Tuesday, November 28, 2006