The Catholic Church in Irsch from Manuscripts and Pictures 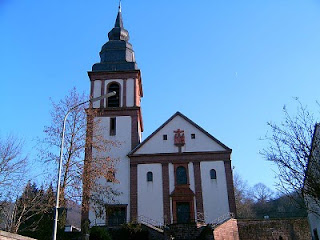 The Most Important Events Happen in God's House!

The small village church which my Meier, Hauser, Weber, Steffes, Schawel and Britten ancestors attended is still an active Catholic church today. The outside retains much of the appearance of the structure as it existed in the 1800s.

From the written sources available to me as well as the pictures below, I can ignore the modernized interior of the current Catholic Church in Irsch and visualize the heart of the older church as it was from 1806 until the Sunday that my great-great grandparents and their neighbors attended Sunday Mass there for the last time.

This was the structure that played such a large role in villagers' lives, a place that, even today, is filled with the spirit of all the religious ceremonies which have taken place inside the walls - baptisms, marriages, confirmations, feast days, and funerals.  From pictures of and writings about the history of the 19th century church structure, and all the items it held, I am able to accompany my great-great grandmother Magdalena as she walks toward the altar with Johann Meier, her husband-to-be, on their wedding day.  Or I can stand with my great-great grandfather as he views the coffin of his father and listens to the priest saying the prayers of the Requiem mass which beg God for the safe admittance of the soul of Michael Meier into eternal rest.

Some early photos and what books and manuscripts tell us about them.


According to a church history written by Father Markus Laser, Irsch pastor from 1969 to 1990, a major rebuilding of the original church took place in 1806, when the Emperor Napoleon ruled the people of the Saarburg District as their Emperor.  Irsch and its neighboring villages were was longer a part of a conquered territory but rather they were situated within the new borders of France, and the French laws were also the laws of Irsch
So it is that in the archives of the church, an unusual document from that time was discovered. It acknowledged that the church was built while Irsch and the rest of Kreis Saarburg were ruled by the Emperor Napoleon.  It then proclaimed that the people of Irsch would be honored and elated if Napoleon would deign to come to dedicate the new church. (Napoleon did not acede to the request).  The document also invited the French Prefect of Trier to the parish Kermis celebration.

A second document, found in the old bell tower, listed the names of the 1806 pastor, Henry Schneider; the Mayor, J. B. Britten; the eleven village council leaders; and the builder, Matthias Funck of Saarburg, all most loyal subjects of the Empire of France. 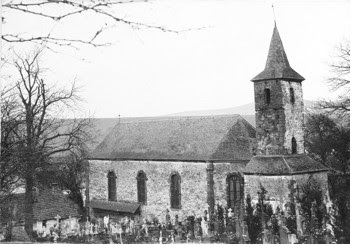 A picture of the expanded 1806 church shows the bell tower built in 1052.  The lean-to-style roof dates from the time of the first church expansion about 1450.  From the cemetery at the side of the church, it was possible to see, through the trees, the house where the teacher/sexton Herr Romey lived and gave lessons.  The church was rebuilt in a time of poverty and was only 75 feet long and 29 feet wide. It stood on a small hill, the 20 sandstone steps of a staircase leading up to it.  The shape of the church remained basically the same until 1913 when it was renovated and made larger. 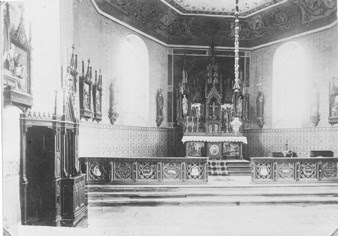 The interior of the 1806 church was in the style of a long hall with an inner ceiling which was flat except for rounding at the edges. The chancel area had two windows, one on each side of the sanctuary, and three Romanesque style windows which provided light for each side of the nave where the congregation gathered.

The main altar, small in size, was adorned with tall silver candlesticks and a carved wooden crucifix dating from the mid-1800s.  The main altar displayed the statues of Sts. Gervasius and Protasius, the two saints to whom the church was dedicated.
While the Church takes its name from Sts. Gervasius and Protasius, the inclusion of two additional patrons for the Irsch church, Saints Sebastian and Lucia, took place about the 1700s according to Fr. Laser's history.  It was a time of poverty, fire danger, and fear of the plague.

Saint Sebastian was condemned to death and shot with a multitude of arrows.  However a Christian widow, attempting to take away his body for burial, discovered he was still alive.  He quickly recovered and went on making converts to Christianity.  The emperor Diocletian ordered him killed a second time, and so he was clubbed to death.  He is the patron saint believed to protect people from the plague. A copper vessel within the Irsch church held the relics of Saint Sebastian according to a church document from 1808.  In addition, a fraternal flag of St. Sebastian was displayed inside the church; and the Brotherhood of St. Sebastian met four times a year, with its members coming from neighboring parishes to celebrate and to pray together in Irsch.

St. Lucia, an early Christian, was condemned to death for taking money without permission from her pagan fiance and giving it to the poor.  This was discovered, and Lucia was sentenced to be burned to death, but the young woman was untouched by the flames.  When it was clear that fire could not harm her, her throat was cut.  Thus she became the patron saint of firefighters and of the poor. 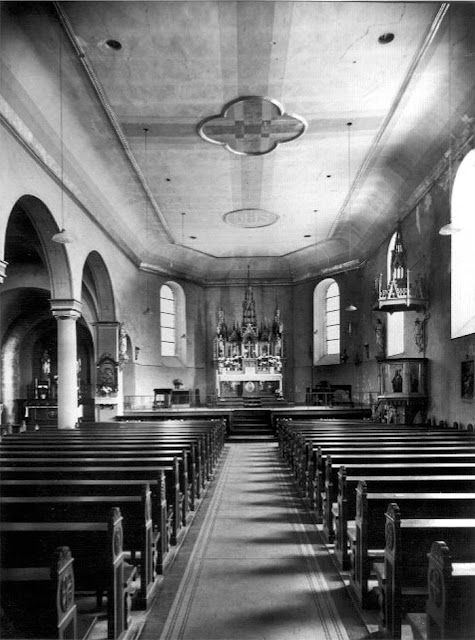 Here is an undated picture of church interior, probably taken after the 1913 renovation.  The cross described below, which had hung above the main altar in the oldest of the Irsch churches was moved to the right wall next to the pulpit. 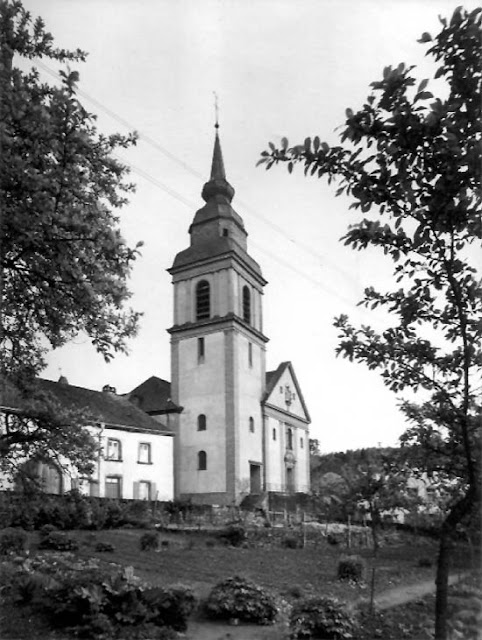 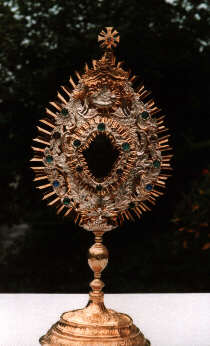 About 1750, the church acquired a beautiful baroque gold-plated monstrance.  Foot, shaft, and a decorative knot support the oblong- shaped monstrance with its canopied top decoration of God the Father and the Holy Spirit Dove.  The windowed compartment which holds and displays the Eucharistic bread is surrounded with well polished quarz stones in the colors of emerald, carnelian and aquamarine and then by a flat oak-leaf wreath of silver.  This was especially fitting since so many of the Irsch villagers made their living by stripping the outer bark from oak trees and selling it to tanneries along the Saar.  Thus the heavenly Bread of Life is surrounded by the leaves of the tree which brings earthly food to the table. 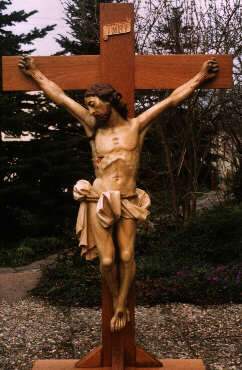 The altar cross, which had hung over the small baroque high altar in 1739, was moved to the side of the pulpit after the 1806 construction.  The body of the crucified Christ was made of beech wood, 98 cm high.  Christ's head does not have the usual crown of thorns; instead a lock of hair falls forward, almost touching his shoulder.  His legs do not rest on the usual support but are nailed directly to the cross.  The body's anatomy is finely carved.  The face of Christ, with a short beard, has half-closed eyes and beautifully represents His submission to the will of the father.

In the 1800s, Pastor Peter Kremer baptized my great-great grandfather, Pastor B. Pfeiffer married him to my great-great grandmother, and Pastor Peter Schmitt baptized their children and said the last Mass the 1861 emigrants attended in their familiar church before leaving for Le Havre and the long trip to America.  I often imagine the special blessing he gave them, inside this church which held so much of their history.
References:
Meyer, Ewald, Irsch/Saar: Geschichte eines Dorfes, Gemeinde Irsch, 2002
Die Pfarrkirche in Irsch/Saar, a manuscript by Pastor P. Markus Laser, from 1979.  Website version:  http://www.irsch-saar.de/sdoku.htm
Photographs from http://www.irsch-saar.de

Posted by Kathy, the Single-minded Offshoot at Saturday, May 08, 2010