Fabrics and Colors for the Not-So-Privileged Classes 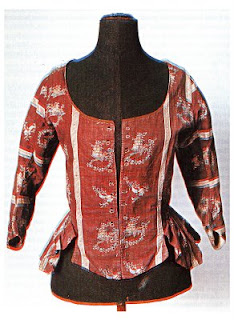 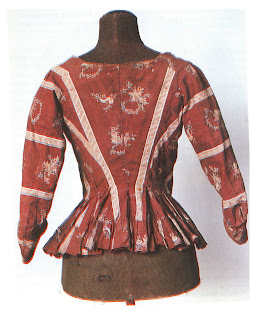 Kattun (calico) jacket front and back with woven design.


It may seem as if I am wandering from the subject of the clothing of the Trier area in the early 19th century, but please be patient since I want to make a point. I have just finished reading a historical novel about Mozart's sister, Maria Anna Walburga Ignatia Mozart, better known as Nannerl. The novel is set during the latter part of the 18th century. The Mozart family lived in Salzburg and while they were not nobles, their place in the society of the time meant that they had a high position in the tightly structured class system of that day.


Here is a description of a dress being made for Nannerl:  "...the costly work of the dressmaker...squeezed the girl's bust like a trap and at the waist opened out over the hips in a puff of yellow taffeta dotted with flowers, and then fell to the floor in an exultation of flounces."

Most historical novels describe this kind of fashion. The materials had to be ordered, perhaps from France, surely from a large city and a skilled dressmaker was hired. When a servant girl  became the heroine of a historical novel, no time was devoted to a description of her garb until, through some twist of fate, she too is dressed in fine brocades or satins.

But the book "Kleidung im Trierer Land des frühen 19. Jahrhunderts" is a source where the fashions and fabric of the woman of the lower middle class or the farmer's wife and daughters are explained in detail. That's why I am about to tell you what I have learned about that subject and why I have excluded the fabric and color of dresses worn by the women of Nannerl Mozart's class.  If  it had been possible, I would have gladly concentrated on the kind of clothing worn by the villagers and peasants in the small, provincial town of St. Gilgen, where Nannerl was sent to recover her health.  Sadly, these clothes were given not a whit of attention, which means I continued struggling with Martha Heit's difficult (for me) German text about the attire of the lower classes of the Trier region.

A person's class had a great deal to do with the type of clothing that a woman was allowed to wear. In parts of Europe, including Germany and the Trier area, a type of "sumptuary law" was enforced, forbiding unseemly luxury among the lower classes. Sumptuary laws, as the name implies, sought to control consumption, and usually did so on the basis of rank. In other words, such laws, usually promulgated by emperors, kings, or nobles permited more ostentation and luxury among lords than among the middle class or peasants. The German sumptuary laws were part of an effort to discipline social life and social order into easily identifiable parts.


The German word "Rock" meant clothing in general in early times; but by about the 1600s it had come to denote a woman's skirt, whether sewn to a bodice or worn as a separate item of clothing. It was the most important part of her wardrobe. If permitted, this skirt could be very colorful, whatever the social class of the wearer.  But because the skirt could also be one of the most expensive pieces, hand decorated with fine embroidery, the societal rules mentioned above usually forbad certain classes too much "show."  In such a situation, a lower-class woman's overskirt had to be very plain.  In some places only dark colors like black or brown were permitted.


Not to be deprived of their desire for something pretty to wear, peasant women made splendid colorful underskirts. And from folk literature about the underskirts of the women from the Eifel area northeast of Trier, it is clear that these garments were the pride of each farmer's wife.  At times, two or three were put over each other.  This was especially true for a bride's skirt and underskirts.  In the Saar area in the 1850's, a woman's underskirts counted as the most costly pieces of the wardrobe.

Martha Heit, writes this about the skirts of the Trier region, "There was an early "patchwork" on the side of the skirt".   This puzzled me until I saw the picture of a woman's jacket which was reproduced in her book; a complex patchwork-style design adds a dramatic flare to this jacket which was probably owned by a middle-class lady.


From the late middle ages until the 1700's, most of the clothing of the women from the middle mountain area of Hunsruck, Eifel and Saargau was made from linen. The flax had been grown on the family's own land and woven by hand. Clothing made for housework had the natural color of the flax thread. If colored, clothing was usually a practical gray or black. For the peasant woman, this didn't change much until new techniques developed around the beginning of the 1800s. The farm wife's loom, which was put to use in the winter after the crops were harvested, took only heavy threads, although with a heavy thread, the weaving went fast.   The garment would be rather coarse when made on the home loom.  It was an excellent way to make such things as linen trousers or any kind overwear.

The simplest and lightest weaving had to be done by the village weavers who had the ability to work with lighter-weight threads of wool, linen and cotton.  These could be mixed together in a woven piece.  The making of cotton cloth was known by weaving families, but the threads used tended to be very thick if made by small town weavers, as opposed to the finer cott0n cloth which was woven for women who lived in the big cities. The women of the smaller towns envied this fine cotton material.  Cotton came into Germany from Holland and England.  These two countries had more trade with India where many types of cotton could be obtained.

French weavers were very creative and put silk and wool together; they also created more varieties of cotton and muslin with different weaves and colors.  This variety of materials were introduced to the Rheinland when Napoleon declared all the land up to the west bank of the Rhine River as French territory.   However, when Prussia defeated the French and claimed back the Rheinland territory, tariffs were levied on French products and Trier folk could no longer get this kind of material.  So in Germany there was a return to Tertig, a mixture of linen and wool.

In the early days of the 19th century, new materials for women's clothing began to allow some variety. Linen or linen and wool (Tertig) cloth, long a staple fabric for most of a women's everyday and Sunday/festival clothing was slowly challenged by something new, the so-called "Kattun."


Kattun is an older German word for calico cotton or chinz. It too became available in the Trier area at the time of Napoleon. It replaced linen in the wardrobe of many of the women of the middle class, as well as the wives of well-to-do farmers, even during the poverty years between 1816/17 and 1830/31. 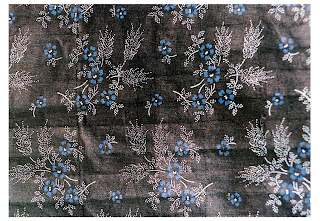 At first the Kattun was plain but prints started appearing in Germany about 1810. After the fall of Napoleon, England again controlled the textile market and produced fabric with designs printed with four rollers. Not many women owned Kattun clothing with a woven design. The well-to-do in the Trier area did not have as much access to this kind of material as did those in France.  People of quality were the most likely to own such clothes - which were very susceptible to theft. 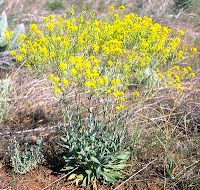 Dye was needed to give clothing color.  The first dyes were usually  plant-based.  Blue colors were gotten by using the roots of a plant called Waid in German, woad or wode in English.

Red colors came from the red roots of the madder plant.  Nuts and tree bark provided darker colors.  There were drawbacks to these dyes.  It was difficult to be certain what color fabric you would get; light vs dark vs spotted.  The natural dyes stayed in place for awhile but did continue to fade as a garment was washed.

Indigo which was imported from the Indies dyed a much truer color of blue, and it always came out the same color so it was very popular in the Trier area in the middle of the 18th century.  In its early years it was processed by mixing it with urine to get an especially good and long-lasting color.

Somewhere, I'm sure, there is a book, fiction or non-fiction, written in English, which describes the clothing of peasant women in great detail, now that I've just re-invented the wheel.  But until I find that book, this brief study of the fabrics and colors of a lower class woman's clothing, which was so familiar to my female Trier-area ancestors, has explained their appearance in a way that makes it understandable to me.

For additional information about clothing in the 19th Century, see these further posts.

An Unusual Book About Clothing

The Merchant Traveling the Roads

Women's Crowning Glory - Hide It or Decorate It

Posted by Kathy, the Single-minded Offshoot at Friday, June 19, 2009