Women's crowning glory - hide it or decorate it? 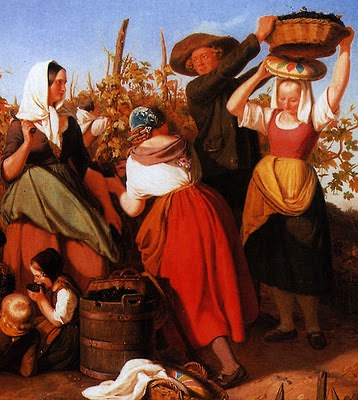 When was the last time you wore a hat - one that was part of your indoor dress - to a social function, to church or to any event? We women who live in the northern climates wear hats or tams or caps or perhaps earmuffs to keep our heads and ears warm on the cold days of winter, and we may wear a straw hat at the beach in summer or when we are working outside on a hot and sunny day.  Such was not the case for our ancestors in the 19th century Rhineland.   A head covering and/or ornaments for a woman's hair was a part of daily living.  While weather related conditions might have caused a need for the cap or bonnet, it also identified a woman's place--married or single, upper or lower class, and even what area she came from.

The largest number of head coverings were worn by women, especially because of the Catholic church's interpretation of St. Paul's letter to the Corinthians about women covering their heads to show respect. While the upper classes were not so earnest about the tradition of head covering, especially when not attending church, women who lived in small villages were very diligent about it and almost always wore head coverings of some kind until almost the end of the 19th century - even though the hoods and bonnets of that day were actually a derivative of pagan head coverings worn in ancient times.


The women from the small villages of the Saar, Hunsrück and Eifel wore a simple bonnet usually made of blue colored calico with velvet-like fastening. It was drawn back in folds and covered almost the entire head. Only a bit of hair was revealed - hair combed flat at the forehead and occasionally a little hair showing at the back of the neck.

Younger women were allowed to go without much headcovering but older women without covered hair, especially in the early centuries, were looked at as witches and this carried over into the 1800s in rural areas. So women who deliberately went without a hat may have been making a statement about their disregard for convention.  While an uncovered head was allowed for the young woman, uncovered hair gave an older woman almost a witch-like aura.

To defend themselves against being considered shameless, some married women, especially in the middle and upper classes, came up with ways that some hair could be shown. The hair was braided or bound together at the back, held in place with a wide pointed decorative hair pin and a net covering.  A wide band of material, which covered most of the top of the head, was then tied under the chin in imitation of the usual cap of the married woman. 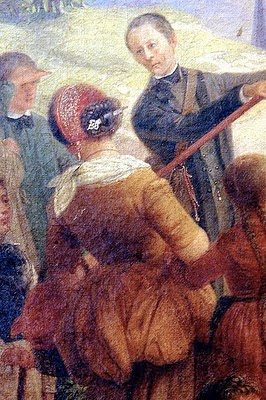 Until the end of the 19th century, a form of the extra-wide hair pin with its ornamentation was also used by unmarried women to hold their artfully twisted braids in the shape of a bun. One that was seen in many parts of the Rhineland was the Tugendpfeil, a "virtue arrow." The virtue arrow was worn by young, unmarried women or sometimes by a spinster.  This custom declined gradually during the1800s and had ended by the end of the 19th century. When a maiden married, the virtue arrow was no longer worn but rather replaced by the full bonnet.

The picture here is a detail from a painting by August Gustav Lasinsky in 1847.  (The full painting shows a group of pilgrims on their way to view the Holy Robe in Trier, which is still reverenced as the robe Christ wore at his crucifixion). The woman in the foreground wears the "Virtue arrow."

In a Small Rural Village


A typical village woman from the Saarburg area probably would own the following head coverings:  A simple cap without adornment, a decorated bonnet, a woven hat of straw or other material, and a scarf.

The scarf was folded so that it had three corners.  The tip would fall over the woman's back and the other two corners would be tied at the neck.  In the Saargau, women wore a black knitted or crocheted scarf with a tip that had the look of a tail handing down the back.  It was appropriately called the Schwanztuch (tail cloth).  In the Eifel the scarf was worn over a simple white cap.  A Stecknadel or sticking pin kept the scarf from slipping from the cap.  A young unmarried woman who wore just a hair net or hair pin to hold her braids in a roll, tied the scarf directly to her head (note painting above).  And many young women preferred wearing a figured red cloth bandana or handkerchief.  Headscarves were made of wool, cotton or linen.   A white scarf was used for fieldwork.  It was tied in such a way that it shadowed and protected the face from the sun.

In the Hunsruck, the cotton woman's cap was very popular.  The simple cap, usually of cotton or calico, was colorful, usually blue.  It was fastened under the chin.  A bell-shaped bonnet, often trimmed with shirring or with lace was worn on Sundays and holidays.  There might be modest decoration, but the use of artificial flowers, beads and silk ribbons was rarely seen.  Unlike the everyday cap, bonnets were not so tightly fitted around the head.


The women of the larger towns, the Bürgerin, had rather simple hairstyles, but clever maids who had a flair for fashioning hair into a fresh variations were in demand in the early part of the century.  One of the hairstyles worn by the middle class during this period was complex twisting of the hair which was wound low on the neck and held in place with a decorative comb or two.  There might also be puffs of hair styled over the ears, and the hair might be mixed with flowers, pearls or even feathers for ladies of the upper classes.  Some women also wore curls on the forehead in the English fashion. 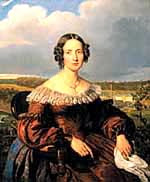 The comb to hold the hair in place was worn by all classes of women but it hardly ever showed in the hair of the women from the small villages because they covered the comb with their bonnets.  The middle and especially the upper class women who did not always wear their hair covering, might wind their hair around at the back of the neck and hold it in place with a comb at the top.  Young women of this class would curl their hair and push it back behind their ears.  Older women had to be a bit more circumspect, wearing combs to keep any curls under strict control.

At the beginning of the 19th century, the older women at the usually wore what was called a "German cap," a bonnet which had one or more rows of pleating at the very edge of the bonnet.  If the woman was from the upper or middle class, these pleats might be made of fine lace.  The bonnet sat well forward on the head, almost shading the forehead and was tied at the chin.   These were considered very old-fashioned by younger women.  French women looked down on the German cap, as this kind of head covering had completely gone out of fashion in France, which even then, set the styles.  Already, some women in the larger Rhineland cities were wearing the "Capote," a hat with a wide brim that shaded the face and could be trimmed with flowers and jeweled trims.


While the bonnets and caps of the German woman of the 1800s have long since gone to museums, there are days when these head coverings would have their advantages.  A Rhineland village woman would not know the frustration of a "bad hair day."

Posted by Kathy, the Single-minded Offshoot at Sunday, August 22, 2010