Two Churches Watched by the Eye of God 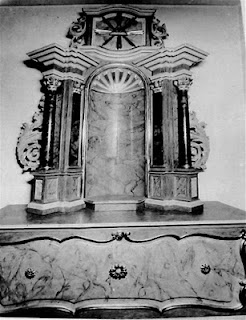 The main church was in the larger village of Zerf - as was the cemetery for both churches.  I can only guess about the celebration of the daily and Sunday Masses for these two churches.  My theory is that a daily Mass and Masses for special celebratory occasions such as Easter, Pentecost, Christmas Midnight Mass and the conferring of the Sacrament of Confirmation (requiring a Bishop) were all held in the larger Zerf church.  The Chapel Church in Oberzerf may have had a Sunday mass each week, as well as wedding and funeral Masses for the residents of the village.

A Visit to the Chapel Church of Oberzerf

It was unusual that tiny Oberzerf had a place of worship all its own.  My Oberzerf ancestors lived in one of the smallest of the Saarburg Kreis villages. They were fortunate to have a spiritual home so close to them - the place where even the poor, landless day worker or pig herder of Oberzerf could experience beauty, both sacred and temporal.

Magdalena Rauls, my 2nd great-grandmother, her parents, brothers, sisters and all of her relatives, neighbors and friends, lived in Oberzerf. The pastor of both the two churches lived in the parish house in Zerf.  It was there that the villagers walked when they wanted permission to marry and have the banns of matrimony read, and it was from there that the pastor had to be summoned when one of the family required what the Catholic Church today calls "The Sacrament of the Dying."

The altar of the Oberzerf church which is pictured at the beginning of this post is thoroughly described in the Zerf history by Edgar Christoffel.  It was a wooden high altar which had been designed and built about 1730 or a few years later.   It was baroque in style with a large curved niche that held the tabernacle.  Each side column had it's own capital supporting a pinnacle altar piece which stands above them.  This apex has two columns, similar to the ones below, supporting a curved, carved top.  A sunburst with a symbol of the eye of God fills its center.  The wood was painted to resemble the marble this little parish could never have afforded. 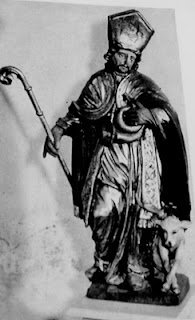 On the window side of the church there was a stand holding a 60 cm high figure of Saint Hubertus. It was a hand carved oak baroque figure also dating from around 1730, about the time the old church was built.   Hubertus is in the garb of a Bishop and holds a staff. His stole and garments are very finely worked. A hunting horn is in his left hand and a small animal figure with antlers in the form of a cross stands at his right. These things signified that he was the patron saint of hunters and foresters. Legend has it that Hubertus, a wealthy young noble, went off to hunt while most people in his town were at Good Friday services. He chased a stag which suddenly turned to face him. The animal had a cross between his antlers. Hubertus heard the voice of God telling him to quit his worldly ways or he would surely find himself in hell. Hubertus heeded the warning, becoming a saintly cleric and bishop, devoted to helping the poor.

The oldest statue in the Oberzerf church is thought to be that of St. Anthony of Padua, much venerated because he was the patron Saint of the poor.  Its style is that of southern French statues in about the 1600's.  The statue of St Anne with her daughter Mary, the mother of Christ, was also displayed and venerated.

An eight sided wood pulpit in the little church dated from 18th century.  The chapel church was renovated in 1831, and a work, written in 1939 which described cultural landmarks of the region, called the Oberzerf Chapel Church a pleasing place to visit.  Unfortunately, the church was extremely damaged in World War II and the church of today is from about 1960.

The Parish Church of Zerf

The main altar of the Catholic Church in Zerf from 1858? 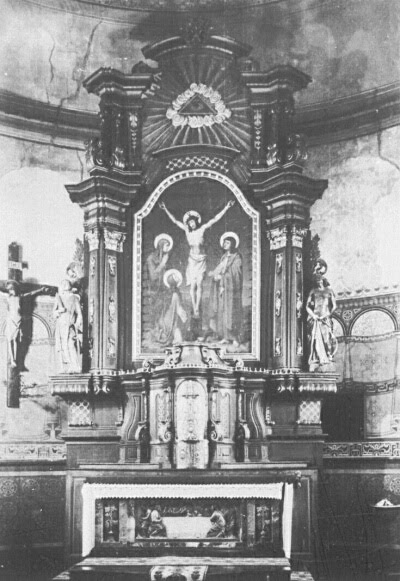 The dominant Catholic church of the Zerf parish, located in what was then sometimes called Niederzerf (lower Zerf), was dedicated to St. Laurentius.  References to a Catholic church located in Zerf were noted even before the 30 Year's War.  The Niederzerf  church was rebuilt or refurbished many times over the last several centuries.   It is believed that those previous churches stood in the same location as the current church; a rocky hill that overlooks the valley where the Grossbach stream separates from the Ruwertal river.

By the 19th century, the Zerf church and bell tower from the previous century were once again badly in need of renovation.  So in 1819-1820, construction of a new building was begun with a bell tower around 30 meters high.  On May 26, 1830 the new church with its impressive tower was dedicated again to St. Laurentius but this time St. Sebastian was also included as a protector of the parish.  The bishop who officiated at the consecration was Joseph von Hommer.

Almost 40 years later, in 1859, that tall bell tower experienced a fire and the top portion of the tower had to be rebuilt.

The altar in the picture above is somewhat similar to the one in the chapel church in Oberzerf.  It is baroque in style though much bigger in size.  As you can see in the photo, the top section of the altar also contained a symbolic representation of the eye of God.  The University of Marsburg identifies the altar as one constructed in 1723.  The description of the new altar from 1858 in Herr Christoffel's book as well as photos from the early years of the 20th century match the Marburg picture in almost every detail.  Whether from the 18th or the 19th century, the handworked statues of St. Laurentius and St. Sebastian stood to each side of the central part of the altar piece.

It seems (if I have not misinterpreted a very complicated sentence construction from Herr Christofell's history of Zerf) that in the 1850's, the altar dating from the early 18th century which was from the St. Laurentius Church in Saarburg was sold to St. Laurentius parish in Zerf for a cost of 50 Taler, and that high altar was installed in Zerf.  The 1858 altar was destroyed during WWII.

Several statues were described by Herr Christoffel, but I was unable to tell if they dated from the time my ancestors lived in Oberzerf.  One important object that was a part of the church in their time was a baptismal font from 1838.  It was made of sandstone and the pedestal portion shows an apple tree with a serpent wound around the trunk.  The bowl of the font had perpendicular deep grooves and in each groove was carved a bell-shaped flower.

Perhaps it will seem that I have spent an inordinate amount of time describing the churches of my ancestors, but I think of it as plugging holes.  I began this blog to organize my factual materials in order to find illusive facts when I was ready to write a detailed novel.  I decided to share my material with anyone who chose to look for a topic which was also of interest to them.

I started my writing with the most general material.  As I begin my sixth year of this blog, I'm capturing smaller and smaller details of the villages; and the books about the churches in the three Kreis Saarburg villages of my ancestors are filled with meaningful descriptions - for me.  I do hope that these last three posts will give you an idea of the church structures that your own ancestors knew.  With that in mind, let me refer you to an excellent source of pictures from the University of Marburg photo archive, with its 1.7 million pictures.   It was the source of the picture of the main altar in Zerf and is the first source listed below.   Perhaps you will find a picture of the church of your ancestors.