Easter in the Saar-Hunsrück Region 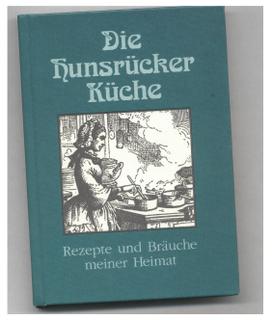 
Holidays in Germany were rich with tradition, some of which have carried over into our own times. But others have nearly been lost, showing up only in German self-publications or the Heimat books published to commemorate 1,000 or more years of history in the little villages of the Rhineland.

While I was looking for typical recipes from the Hunsrück region of Germany, an area which was mostly made up of small farmers, I found a little cookbook called Die Hunsrücker Küche by Christiane Becker. It not only provided recipes but also the little-known folk-customs that went along with holidays, marriages, harvests celebrations and more.

I was fascinated with Frau Becker’s description of the Easter of a Hunsrücker child. It seem that for a week or two ahead of Easter morning, the children went into the forests of the Hünsruck and gathered moss so that the Easter rabbit would find a soft nest for his eggs. This nest was usually placed in the garden unless the weather was so inclement that a little willow basket, lined with this moss, had to be brought into the kitchen of the farmhouse.

As in our own day, the children were the first up in the morning and the last child to leave his or her bed was called the "Österquack" (Easter Quack) and teased by the others for the remainder of the day. Then there was a rush to find the eggs (colored with onion skins, coffee grounds, and the early spring leaves of various plants). Once all of the eggs were found, it was traditional for each child to visit godparents and bring them some of the colorful eggs.

Then there was this somewhat unusual custom. In the afternoon of Easter day, the children would go looking for thriving anthills so that the colored eggs could receive further decoration – little dots that the ants left on the eggs placed in the middle of the teaming mounds. (Makes one appreciate Easter egg decals!)

There were countless games that were played in the meadows on Easter afternoon, all involving the eggs. Both children and adults enjoyed many of these activities. For example, two combatants would take their eggs in hand, small end forward, and smash them together. The object was to cause worse damage to the egg of your opponent than to your own. If your egg was the winner, you could claim the other egg. Another popular game was the rolling of an Easter egg down a slope. If by chance your egg hit another that had strayed off of its course, that egg was yours.

On the evening of the second day of Easter, the eggs were eaten as the supper meal. An old superstition said that if no lamps or candles were lighted on this day, one would be protected from the bite of gnats and midges for a full year. I wonder if that would work on mosquitos.
Posted by Kathy, the Single-minded Offshoot at Friday, June 24, 2005