A Visit to the Zerf Heimat Museum - Conclusion

The following section ends my information about the Zerf Heimatmuseum. It contains a description of miscellaneous artifacts not covered in the other posts. Just like the other entries I have posted, these artifacts may help paint a better picture of daily life in the village of Zerf and/or of the many other small villages near the Saar and Mosel rivers.

As I explained in my first post on the Zerf museum, the descriptions below without parentheses are my translations from the German language museum guide I received as a souvenir at the time of my visit. Anything in parentheses is additional information gleaned from other sources which I hope makes the original description a bit clearer.

Now back to the museum 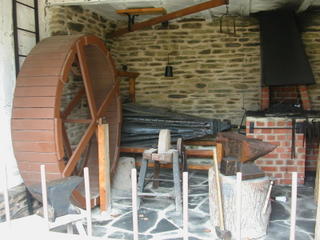 In the blacksmith's shop one can see the forge with the bellows, anvil, hammers, pliers, a bending machine for bending the eisenreifen (iron wheels) for the farm wagons. (According to the book, Serrig: Landschaft, Geschichte & Geschichtenby Klaus Hammächer, a dog could be trained to run inside the wheel shown in this picture. As he ran, he powered the bellows and the flame of the forge. The picture was taken at the Roscheider Hof open air museum near Konz)

Trumpets were used by Schweinehirt (swineherds). At the sound of the trumpet, the farmer opened the pig stalls and the Schweinehirt drove the pigs into the oak forests and guarded them there. In the evening the Schweinehirt brought them back with the trumpet signal. On the Feast of St. Martin (November 11) the Schweinehirt received a measuring beaker/cup full of grain for each pig under his care. (St. Martin's day was also the traditional time to prepare for winter by slaughtering pigs, geese, and other animals since they would soon be unable to forage for food and would have to be fed by the farmer)

The half Vierzel was a measuring instrument for grain. In former times the grain was not weighed; it was measured with this container. Four half Vierzel 'filled not too much and not too little' ( leveled?) equaled one hundredweight of corn, barley or wheat. Six half Vierzel made up a hundredweight of oats, because oats is finer. In earlier times, the teachers in the village were often also the swineherds, because there was no school in the summer (when the pigs could roam). School was held from St. Martin's Day to Easter.

One could distinguish cow, sheep and goat bells by the different tone qualities.

The small Nicholas bells were used by the adults to make the children aware of the feast day some weeks before it arrived. They rewarded the children's obedience by putting small gifts at the door on St. Nicholas Eve 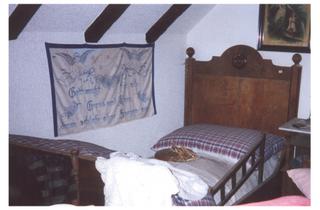 In the bedroom we see the straw filled mattress, the pillow filled with grain chaff, and the feather bed. (The villagers made use of almost any part of the crops that they grew, even in the bedroom. For instance, small pouches were filled with grape seeds and could be heated to ease pain, much as we can relax tight muscles by using the same sort of pouch and heating its "magic crystals" in a microwave. These grape seed pouches are still sold at the "Golden Autumn" festival and market in Saarburg)

The broad low-lying wooden box sled was, in former times, a popular plaything for the children during the long, snow-rich winters.

Kleppern (wooden clappers) and Raspeln (a rattle-like wooden device which rotated and made a rasping sound when shaken by its long handle) replaced the bells during Holy Week when bells could not be rung on Good Friday and Holy Saturday. 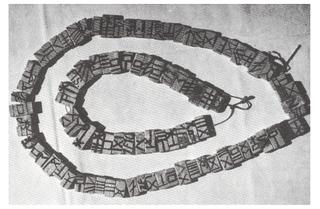 This is the Rosenkranz on which the house sign and hedge land identifiers for the Gehöfershaft were placed. These blocks were drawn in a lottery for distributing the Lohhecken among the farmers in the Gehöfershaft. (Above is a photo from Der Hochwaldort Zerf am Fuße des Hunsrücks, by Edgar Christoffel, c. 1981, Verlag W. Rassier, D5510 Saarburg. It shows wooden blocks with symbols which are rune-like rather than alphabetic characters. This Rosenkranz, the German word for rosary, served as a sort of plat map for the hedge lands which belonged to the entire community of land-owning farmers. In the Saar and Mosel region these landed farmers were usually referred to as a Gehöfershaft. A symbol identifying each section of the hedge lands, sections which were especially valuable for the oak tree bark stripped for tanning, was painted on one side of each small wooden block. Then a lottery was held. Each farmer in turn drew out a wooden block containing a hedge land symbol. His distinctive house mark could now be painted on the other side of the wooden block and the section was his to work until the next lottery was held. When the lottery was completed, the blocks were strung into the Rosenkranz and probably kept by the mayor of Zerf. In Zerf, this lottery took place every five years. The neighboring village of Irsch had a similar Rosenkranz, according to the book Irsch/Saar: Geschichte eines Dorfes, by Ewald Meyer).

The kitchen utensils and the farm equipment are described in Part 2 and Part 3, the other parts of this amazing visit to the past.
Posted by Kathy, the Single-minded Offshoot at Saturday, July 23, 2005