A Visit to the Zerf Heimat Museum - Work in the Fields 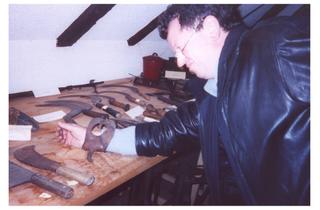 Zerf's Mayor, Manfred Rommelfanger, wears a wrist cutter sometimes used for grain or flax. Sickles at the right; Ginstereisen at the left


"Next to each other here you see Sichel (sickles) and the somewhat stronger Ginstereisen (iron tool for cutting brush). In former times Ginster was dried and used as straw for the cattle stalls. (See A Visit to the Zerf Heimat Museum for a description of the broom shrub called Ginster). The women used sickles to cut the grain stems and bind them into sheaves. They also used them to cut weeds. With a sickle, the goat farmers cut the grass and weeds along the waysides and the field borders to feed to their animals."

"The Dengelstöcke was a device that sharpened or 'whet' metal by hammering it. It was used for scythes when they became dull. The Denkelstöcke was struck into the ground or, more often, into a wood log. The cutting edge of the scythe was worked on with the hammer. The hammer had to be rounded at the head so that no depression was made in the scythe when it was struck."

"Reiserbesen (twig brooms) were made of birch twigs. In former times, most were bound with hazelnut switches; later with wire. The Reiserhaken (twig axe) was used to cut the birch twigs. The birch twigs was pressed together for binding with the broom press. After binding, the brooms were trimmed and shaped with the small Reisermesserchen (little twig knife). One used the twig brooms for sweeping of house, yard and stable." 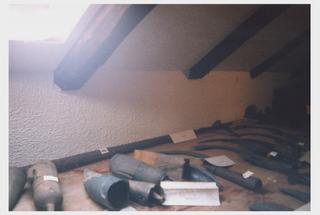 "Planting tools lie on this table (center). Vegetable seedlings, beets, lettuce, etc. were planted in field and garden with them." (I was told that most are made of cow or ox horns. The tip of the horn was cut off so that the seeds could slowly come through. Different sizes of horns and how much of the tip of the horn was removed allowed for the planting of various sizes of seeds)

Here are Loheisen, iron tools for stripping bark (Lohecken) (tool at the back of the table). They are also called Lohlöffel or bark spoons. With them the bark was stripped from the oak trees. In former times one extracted Gerbsaüre (tanning acid) from this bark. The acid was necessary to process animal hide for leather." (At times there were as many as 20 tanneries in Saarburg in the 1800's, and the selling of the bark to the tanneries provided farmers with a much needed cash crop).

"Here one sees Schlotterfässer, small barrels made out of wood, horn and sheet metal (far left). The name Schlotterfass (shaking barrel) comes from the typical noise which developed when the whet stones inside knocked together. The farmer hung the Schlotterfass, which contained the whetstones and the water, on his belt when he went mowing. Then, if necessary, he could always sharpen the scythe."

"For beet cultivation, the Hackpflug plow was used. A cow led between the rows could pull it. Then the farmer only had to hoe the soil crosswise between the plants to chop out weeds." (To my surprise, I learned that many farmers could not afford an ox or a horse for field work. So their cow/s were pressed into service, very much decreasing the amount of milk that a cow could produce)
Posted by Kathy, the Single-minded Offshoot at Monday, July 25, 2005