On St. Martin's Day, Winter is Not Far Away

St. Martin's Day, November 11, marked, in former times, the start of winter. It was a day which affected the residents of each village in many ways. It was the time when interest and lease payments were due. This was the origin of the following farmers' saying, "Sankt Martin ist ein harter Mann für den, der nicht zahlen kann." ("Saint Martin is a hard man, for those who cannot pay.") It was a better day for the sheep herders and the servants who received their yearly pay on this day. The geese lost their heads, literally, at the beginning of winter, and the celebration of the feast included roast goose for those families that could afford it. "Sankt Martin ist ein guter Mann, er bringt die Bratgans uns heran," was another farmer's saying that represented St. Martin's Day (Saint Martin is a good man; he brings the roast goose to us).

By St. Martin's Day, the field work and the harvest were finished. I was surprised to learn that in earlier times, Advent began right after St. Martin's Day, with the eating of meat strictly forbidden during the entire period. Therefore, the roast goose eaten on the saint's feast day was the last meat that would appear on the table until Christmas Day and this must have greatly increased the enjoyment of the St. Martin's Day meal.

The custom of the St. Martin's procession is one of the few that is still observed in the current time, as the picture above shows. The children go out with colorful lanterns, following St. Martin on horseback, dressed as a Roman soldier, who leads the parade. At the end of the procession, a giant Martin's bonfire is lit and the children receive Brezeln, a bread pretzel formed into distinctive symmetrical loops from a long strip of intertwined dough. 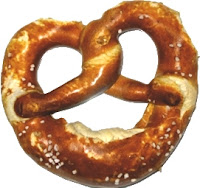 After St. Martin's Day, the hard work of the months of harvest came to an end and the cold winter months began. The soil began its yearly rest. Then farmers too could sit near the stove or the fireplace, rest, and enjoy a break from the heavy labor which would not start again until spring.

In the autumn, some of the fruits gathered had been mashed and put in oak barrels to ferment. In the winter came the time to distill or "burn" the fermented fruit into Schnapps. Many kinds were made. The cherries, Mirabel plums and Zwetsch plums made an especially fine Schnapps that would be served on special occasions and feast days. For every day, a Schnapps made of pressed apple peelings called " Balesch" was a drink for workdays. A typical farmer would drink Balesch each morning after his breakfast. It was meant to protect against every kind of illness. If a person had a stomach ache, not the doctor but Balesch was the prescription.

When the weather was cold enough to freeze, the farm's pig was slaughtered for the family's winter food. Often the village butcher would come to the farm to make sure that no scrap of this valuable animal was wasted. The farmer's wife had already filled the large pig kettle with water and heated it on the fireplace. The pigs legs were bound together and the animal was dragged into a pile of clean straw. The butcher knelt down on the pig as it struggled to avoid the sharp pointed knife but in vain. The butcher made a cut from the throat to the heart and the farmer's wife caught the flowing blood in a large pan. Then the pig was covered in straw which was set on fire, burning the bristles from the pig's skin. The pig was pitch black as the fire was extinguished and his carcass was lifted on to the butchering table.  Any remaining bristles shave off and washed with the hot water that had been heating in the kitchen. It took more than one man to lift the pig's carcass and hang it on a ladder which leaned on the outer stable wall. The housewife then carefully cleaned the inside of the carcass, and it was left there until the rind or outer skin would harden with the cold.

The following day, the butcher returned, cutting the pig into pieces to be smoked, made into sausages or eaten fresh.  Even though the farmer's wife had previously felt compassion for the animal she had fed and tended throughout the year, now she could not but be happy as she thought about the tasty ham, bacon, fresh meat and sausage that she would put on the table for her family during the winter months.

Many cellars were made of stone which was an especially good place to store the winter supply of produce that was the result of months of hard work growing and harvesting it.  The stone construction helped keep the cellar at a temperature that was ideal for storage purposes all through the year. It had kept things cooler in the summer and now would be warm enough to avoid freezing the winter food supply. From November on, the cellar stored wine, potatoes and other root vegetable, and crocks of cut cabbage fermenting into Sauerkraut.

The farmer had felled trees and chopped wood for the fireplace in the first days of the winter season and stored it in a shed or shelter. The smaller branches of the trees were tied together into giant bundles. The smaller twigs were useful for quickly starting a fire on a cold winter morning.

All in all, the coming of winter was a time to be looked forward to for the hardworking farmers of the small villages in the Rhineland. For the farmers, there was now time to sharpen the tools that had been dulled from the cutting of crops or tilling the soil and to make any necessary repairs to the farm equipment. These were the hours when the father, mother, and children had opportunities to spend with each other in simple pleasures; when the men had the time to talk and have a drink together, when the women had no more field work and could sit to spin or knit, either alone or with a few women neighbors, and most of all it was a period when the children could once again look forward to the visit from St. Nikolaus and the wonderful celebration of Christmas.

I grew up on a small Wisconsin dairy farm and I remember winter's pleasures, especially seeing my father eating a leisurely supper because there was no hurry to get ready for the outdoor work of the next day. Those were times of family laughter and togetherness and is probably one of the reasons, unlike many other people in Wisconsin, I still look forward to the coming of winter and the memories that go with it.