From Bishop's Crosier to Napoleonic Flag to Prussian Eagle 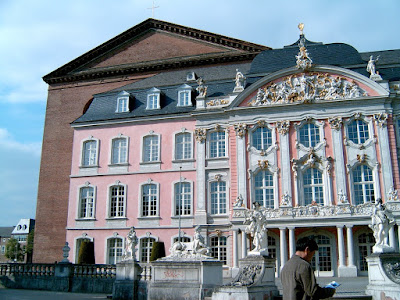 The Palace of the Archbishop/Elector of Trier


As we know, there was no Germany as such until the 20th Century. Instead there was a so-called German Empire made up of large to very small territories ruled by kings and dukes and both civil and religious princes, called "Electors." The governance of the villages of Irsch, Serrig, Zerf, and Oberzerf, for instance, was in the hands of an elector who was one of the princes of the church. In effect, the peasants who lived in the small villages and worked the land had an Archbishop as their ruler. The residence of the Archbishop went back and forth over the years between Koblenz and Trier, but in his book about Irsch, Ewald Meyer points out that the Trier was always the spiritual center for these villages. The monasteries or churches of the Trier Diocese were the intermediaries of the Archbishop and governed in much the same way as the civil authorities who served the civil electors of other Germanic kingdoms or territories.

The line between secular and spiritual was almost non-existant for most of our Rhineland ancestors until 1792 when Napoleon conquered the territory and enlarged the country of France to include Trier and Saarburg along with all the villages along the Saar and the Mosel Rivers and all the land in between. France had the Rhine River as its new border and a multitude of new subjects who spoke only German. While the idea of "Freedom, Equality and Brotherhood," the slogan of the French revolution was something that many of the new French/German subjects admired, they missed their old spiritual home as Napoleon began to secularize life in this new part of France.

It was a shock to his German-speaking subjects to learn that Napoleon had developed his own calendar. Sunday was abolished and its replacement, Dekadentag, was introduced; now every tenth day was a day of rest. In place of the Christian holidays there were secular celebrations. Processions, such as the those of Corpus Christi and Good Friday were prohibited. This situation continued until the Pope and Napoleon reached an agreement or Concordat in 1801.  Faith and religion were again recognized. 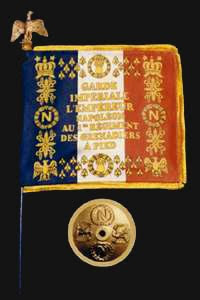 However, there were still significant changes.  Irsch, for instance, became a "secular parish:" that is, it no longer was under the power of a prince/archbishop. The parish pastor was appointed with the approval of the Civil Prefect and the Bishop had to take an oath to the Constitution.  Among the new civil authorities there was hostility to the Church and its former powers.  Thus there were newly established Civil Registry offices. Civil marriage was introduced and required.  The clergy had to take the oath to the French Republic, and the pastors were instructed that the recording of births, marriages, and deaths, that had formerly been only the responsibility of the church, was now secondary to the creation of civil records.

In 1802 the monasteries and abbeys were dissolved, that is, their lands now belonged to France, not to the Catholic Church. Clerical dress was forbidden. For a time the "secular pastors" were expected to live on the offerings of the faithful, including small tithes or by means of citizen offerings of lambs, piglets, hay, flax or other core necessities. But by 1804, the Irsch pastor received 500 francs in state salary per year.

Irsch and Zerf now each had a Maire and a deputy who were assigned civic duties at the local level.  Johann Baptist Britten of Irsch was appointed the first mayor of that village.  In Zerf, a Herr Schneider was the first mayor.  Though liberty, equality and fraternity were the ideals of the time, the governance under this ideal was far from free of charge. Rather, the taxes increased, and the burden became unbearable for the rural poor. The position of Maire was not a popular one, since his office was in charge of tax collection, sometimes enforced with penalties or even violence.  Under these circumstances, anger grew as some of the wealthy used their power to buy monastic estate. They, rather than the Church, became the new "landlords.". While the big landowners could afford to have large windows in their buildings, cottages with their tiny windows provided sparse light for the impoverished villagers.

With the arrival of the allied armies in the Rhineland in 1814 and the Battle of Waterloo in 1815, Napoleon's downfall was sealed.  The Maire now called himself the Bürgermeister, and the Municipal Council was now the Community Council. The first Paris Peace Treaty signed on May 30, 1814 returned France's border to its January 1, 1792 state.

For two years, part of the territory which France lost was divided between two powers. To the left of the Mosel River the Prussian Empire handled administration while the section of territory to the right of the Mosel fell under the control of the Österreichisch-Bayrischen (Austrian-Bavarian) coalition. This included the villages of Irsch, Serrig, and Zerf. It was not long, however, before the Prussian Empire claimed everything Napoleon had lost. According to Ewald Meyer's history of the village of Irsch, the Prussian Eagle was stamped on everything. There Prussian who originated in the north of Germany considered themselves "true Prussians.  They looked down on these newly-conquered Prussian citizens who were sometimes referred to by their northern Prussia countrymen as "painted French." 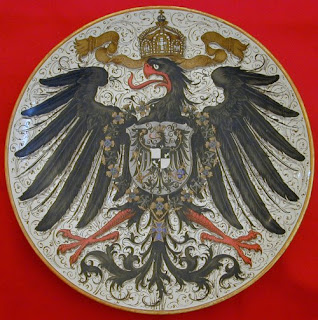 The northern Prussians' contempt for its new "painted French" citizens was returned in kind by the residents of Kreis Saarburg. They called the Prussian Adler (eagle), symbol of the Prussian Empire, "the cuckoo."

Even today the Prussian Adler is considered a symbol of seizure or sequestration.

When I began my family history efforts many years ago, my Aunt Helen told me her grandfather, my great grandfather, who was born in Irsch, had been proud that he was Preußisch.   Things change!

I, of course, didn't speak German then or know anything about German history.  It took me awhile to realize that Prussian and Preußisch were one and the same.