Saar River Sailors and Their Helpers 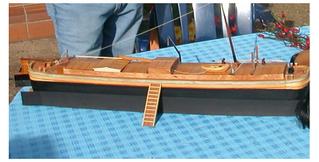 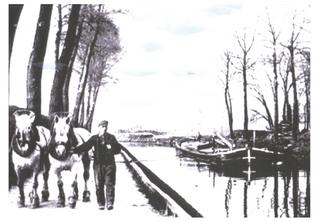 Upper - model of a barge owned by the grandfather of H.D. Jung of Saarburg

Grandma's StoryWhen I was twenty or so, my grandmother told me that her own grandmother, Magdalena Rauls, had run away from home to marry my great-great grandfather, Johann Meier, who was a sailor. For many years I pictured Johann as a seaman on an majestic sailing ship, a glamorous occupation indeed. No wonder Magdalena was smitten. But when my genealogical research started, I learned that Johann had always lived in Irsch and was listed as a farmer. I wrote the romantic story off as pure fiction.

But as I delved into history books about Saarburg and vicinity, I saw another possibility that gave me a far more likely scenario for Johann or for any man who lived so close to the Saar River. It was possible that as a farm boy who could handle horses, Johann might have looked for extra work on the river as a way to improve his economic situation. Was he a Halfen?

Nickolaus Ritzler in his book, Burg und Kreisstadt Saarburg, says that sailing families lived along the Saar River in Saarburg from the very beginnings of the city and that when the barges sailed, there were always men, known as "Halfen" traveling with them. These were the men who handled the horses that towed the barges against the current. Both of these occupations were held in high respect.

The sections which follow are taken from a village history by Klaus Hammächer called Serrig: Landschaft, Geschichte & Geschichten. In a section called "Earlier Village Life," information from Nikolaus Ritzler, Adam Görgen, and Peter Faas describe shipping on the Saar during the "Golden Age" of the river barges.

According to Ritzler, the sailors from Saarburg dressed in high vests topped by blue jackets. On their heads they wore blue caps. This distinctive uniform, along with their deeply tanned skin, marked them as the men who built and sailed the barges that carried cargo on the Saar. Their homes were in the lower city close to the water's edge, as were the buildings where they carefully fashioned their barges. The names Schulges and Mettloch are especially associated with the boat building and sailing families in Saarburg.

The Saar barges were made from solid oak without any blemish, and held together by strong iron nails made especially for this purpose by the local nail smiths. When a newly built ship was ready to make its first trip, there was always a celebration in one of the inns in the lower city, with hardy food and drink for all. Once on the river, the barges carried a wide variety of cargo such as coal, wood, iron, hay, straw, and most kinds of produce. During the many wars over the centuries, the barges also carried soldiers, weaponry, horses and food rations.

The helpers or Halfen, a word that seems to have originated in the region of Cologne, came mostly from the small villages of Irsch, Serrig, Beurig, Krutweiler and Zerf. According to Nikolaus Ritzler, who wrote his account about 1912, the Halfen had broad chests and were usually of middle height. They were easy to identify from their clothing and their walk, a swinging gait which developed from the amount of time they spent riding the strong barge horses. Their arms, too, moved in a distinctive way as a result of swinging a "Peitsche" or whip while they worked.

The dress of the Halfen consisted of white woolen (but not knitted) socks, linen trousers of blue or white, and coarse, strongly nailed cowleather shoes. Under a strong, warm white overjacket with horn buttons, they wore unbleached linen shirts. Headware could be either a black, round hat made of coarse felt, or, when it was cold, a knit "zipfel" cap. This was a sort of a stocking cap worn under the felt hat to protect ears and neck from the cold. Red cotton kerchiefs with white stripes were tied around their necks.

In 1904, Adam Görgen also wrote a description of the Halfen. He said they were healthy, strongly built men of middle size. A humble black hat with a large brim fastened to the head by a thin, colorful cord was their headgear. A blue, red, or white striped cotton cap was put on whenever the other hat was taken off. A red scarf was knotted around the neck and a rough linen shirt covered by a gray or white short linen or "Tirtey" jacket was typical. Their trousers were made of thick, white canvas. Over their jackets, they pulled on a still shorter blue coat and over the stockings that reached above the knee, they wore gaiters. Wool stockings and sturdy nailed shoes completed the outfit.

Gorgen says that when a barge owner needed extra help, he would go to a tavern (most likely in the lower city) to find Halfen. To seal the contract between "Schiffer" and "Halfen", a bottle of wine would be set on the table and both men would drink a glass. Wine was also part of the Halfens' workday. At 10 a.m., a helper received a half quart of wine. At noon and in the evening, the helper was entitled to a quart. When a particularly dangerous stretch was successfully navigated, the Halfen received the so called "wave wine."

No matter the weather, the Halfen would lead the horses along the towpath, if there was one, or ride the horses if the landscape was rough or if their was a ford to be crossed. The horses struggled to pull the barges when the boats were sailing against the Saar's strong current, but they were well cared for and were never mistreated. At the end of the day, the men who handled them were probably as tired as their horses. When the horses faced an especially difficult pull, there was a great deal of shouting by the Halfen as they drove the animals forward. The whip was used then but only when it could not be avoided.

The Trip on the River

Ritzler says that a trip from Trier to Saarbrucken would take about three days. Typically it would involve three or more barges which traveled together. Three horses were needed to pull each of the larger barges. The horses were attached to the barge by means of a strong line attached to the tip of the mast. When the trip began, the sailors would shout "In God's name" and then "Johleit rack". The barges were pushed away from the bank and the horses began to pull. There was a great deal of shouting between the sailors and the men leading the horses. The sound, "juh, juh" signaled the horses. By nightfall the barges had usually reached Saarburg where the sailors and Halfen spent the first night. (The vacation apartment that my sister and I rented when we were in Saarburg was once a barge owner's home; our apartment the sleeping area for the Halfen).

Each day there were also rest stops and during that time the sailors and the Halfen would discuss any problems along the next stretch in the river. Lunch would be carried ashore from the ship and eaten at an inn or tavern, with the landlord providing the dishes, tableware and the wine. The shipowner, of course. paid for the wine that the landlord of the inn placed on the table.

During the trip the sailors and helpers might shout and curse and sometime come to blows with one another, but at lunch time and after there was rest. The men would sit outside, smoke a pipe, and enjoy camaraderie. Once rested, the hard work, shouts and grumbles began again. At night the sailors slept in a "Hef," the Halfen in a strawsack bed and the horses in their stalls aboard the ship.

According to Ritzler, the Halfen were paid cash for each day worked with the shipowners also providing food, drink, and feed for the horses. A lesser payment per day was given to each man for his trip back home. This amount paid for the cost of food, night quarters, bridge tolls, as well as hay and grain for the horses.
Posted by Kathy, the Single-minded Offshoot at Tuesday, August 23, 2005