Saarburg - the City and the Landkreis 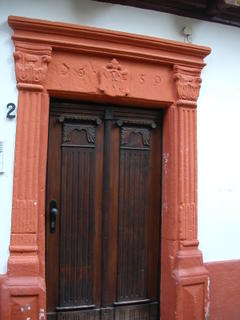 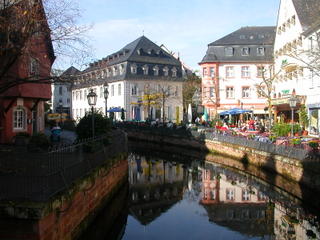 
I made my first visit to Saarburg in 1984. I was not prepared for the rich history and the charm of this small city of approximately 6,100 inhabitants. I took picture after picture on my first trip, and the city has lured me back to it again and again over the years. The Saarburg of today is still the largest city in the Landkreis Saarburg as it was in the 1850's and 60's when my great-great grandparents lived in Irsch, a village approximately 1 1/2 miles to the east.

The Landkreis in Germany is similar to a county in the US, and the city of Saarburg is very much like the county seat with which most of us are familiar. The German word Kreis can mean both "circle" and "district." And just as in our own county seats, the government offices of the Kreis are located in Saarburg.

Founded in the ninth century, Saarburg has both an upper and a lower city. The lower city is situated at the edge of the Saar River. In the nineteenth century it was home to tanneries, boatsmen's and fishermen's houses, the hospital, barracks, wineries, warehouses and taverns. There was a factory that made the bells for some of Europe's largest cathedrals. This Mabilon bell works had moved from France to Saarburg in the late 1700's and continued to cast bells until 2002.

The upper city is slightly newer than the lower city. Houses and shops began to spread up the hill as the city grew. Saarburg was a market town and the markets gave names to streets and squares in both the upper and lower city. There was the horse market, the fruit market, the butter market in the upper city, and the old market in the lower city. The Butter Markt runs along side the Leukbach, a stream which runs through the upper city, then forms a waterfall and drops toward the old city. The waterfall on the Leukbach powered a water wheel for the former grist mill which is now a museum. Above the city stand the ruins of a castle built in 964. All around the city there are steep hills covered with vineyards.

Maybe it was the magic of Saarburg with its powerful waterfall and the castle ruins that made me want to write a novel about my Irsch ancestors, who surely came to this city's markets to sell fruit, butter, perhaps even livestock from time to time. I began to collect as much information as possible about Saarburg as it was in the 1800's.

Last year, in the city's bookstore, I bought Saarburg: Geschichte einer Stadt, vols. 1 & 2, c. 1991, a compilation of articles about the city by various authors. In it I found a goldmine of information about Saarburg in the mid-1800's. Rudolf Mueller, in his chapter, "Geschichte der Stadt Saarburg im 19. and 20. Jahrhundert," (History of the city of Saarburg in the 19th and 20th century) quoted many statistics on the population of 1861 Saarburg as tabulated by the Landsrat Mersmann, the chief administrator of the Landkreis at that time.

Herr Landsmann reported that there were 2,249 residents of the city of Saarburg in 1861, of whom 2,146 were Catholic, 78 were Evangelische (Lutheran), and 25 were Jewish. There were 306 habitations which would mean that the average house held 7.3 persons.

The Landsrat went on to report that there were 7 tanning factories, 15 looms, 4 water-powered grain mills, and 7 brandy distilleries in the city. There was also an oil mill, a tobacco and cigarette factory and a brewery.

There were also a few barbers, a stonemason, a potter, a glazier, some masons, carpenters, roofers, and horse shoers, a master clockmaker, some wool spinners, ropemakers, dyers, harness and saddle makers, milliners, men's hat makers, a basketmaker, a bookbinder, a furrier and even two upholsterers/decorators.

In addition to all of the above, there were 40 shopkeepers of one kind or another, as well as three traders described as "herumziehende" which would seem to mean traders who went door to door; 15 innkeepers; 15 tavern keepers, 7 agents, a hauler and 90 boatsmen.

While the statistics above are for just one small city on a river, I would venture to guess that the occupants of most of the small cities along the Saar and Mosel would have had similar groups of workers, shops, and factories during the time when many of our ancestors made the decision to leave all that was familiar and start a new life on farms, in small towns and big cities in Amerika.
Posted by Kathy, the Single-minded Offshoot at Thursday, August 11, 2005