The Blind King Comes to the Klause

Klause - a German word for hermitage, cell, or den

When I saw the Klause at Kastel for the first time, I knew only that it was an impressive building, the burial site of a king called Johann. The view down to the Saar was even more impressive.

I thought no more about the place until, in 2003, I read the strange story of Blind King Johann of Bohemia, who was buried at this Klause almost five centuries after he had had been killed fighting in the battle of Crecy in 1346. He had come to the Klause by way of a porcelain factory in Mettlach.

A future king of Prussia makes a decision

The nineteenth century part of this story begins with a visit to the Saarburg area by Prince Regent Friedrich Wilhelm IV, who was destined, in just seven years, to be crowned the king of Prussia. Prussia had taken control of the Rhineland after the defeat of Napoleon. The Crown Prince was "a Rhine romantic," one of those persons who had discovered the enchantment of the winding Rhine, Saar, and Mosel rivers, each bordered by steep banks that were lush with vineyards or majestic with stony cliffs or green woodlands. He found excuses to visit this new Prussian province and took an interest in rebuilding the historic sites in the Rhineland with which he had become fascinated during the war with Napoleon when he was involved in the campaign in the Rhineland.

Friedrich Wilhelm made a trip to Kreis Saarburg in the year 1833, traveling from Saarburg City to Kastel and from there to Mettlach. As he admired the beauty of a high and scenic rocky cliff above the Saar River near the village of Kastel, the district magistrate from Saarburg, named Valentin von Cohausen, offered the prince this site in the name of the people of Kastel, explaining that it was where a holy hermit had once lived. The crown prince accepted the offer with delight. It seems to have come to his mind that here was a spot that would be a suitable place for a mausoleum to hold and honor the earthly remains of King Johann of Bohemia, a deceased member of the Hohenzollern dynasty to which the crown prince's family also belonged. He was on his way to Mettlach to the estate of Herr Jean Francois Boch (a cofounder of the firm of Villeroy and Boch that to this day makes fine porcelain) where, he had been told, the deceased king's bones now resided.

When the Prince had confirmed that what was left of King Johann was indeed in Herr Boch's keeping, stored in an attic room in his house, he set about planning for a chapel mausoleum to be built on the tall, rocky peak above the Saar at Kastel. Friedrich Wilhelm engaged the architect and artist Karl Friedrich Schinkel, and the building project was finally finished in 1838. The chapel/mausoleum was built in the gothic-romantic style, fused with and clinging to the rocks as if it had grown there.

It was decided to transfer the coffin of King Johann from Mettlach to the Klause on August 26, 1838, the anniversary of the battle at Crecy. According to a Trier newspaper report of the time, people from the surrounding villages gathered at the heights of Castel on the 26th, a Sunday, for the solemn celebration.

Meanwhile many dignitaries were escorting King Johann's casket aboard a ship sailing from Mettlach to Kastel. One assumes that this vessel would have been supplied by Herr Boch or by Friedrich Willhelm, who by this time was king of Prussia. Among those aboard the ship were regional government officials, religious leaders, and Herr Boch himself, who carried the key to King Johann's coffin.

About 11 in the morning the crowd saw the vessel coming slowly along the Saar. When it landed at Staadt near Kastel, a cannon volley was fired. The arriving ship was met by four young men from Kastel and four from Saarburg who had volunteered to carry the coffin up to the mausoleum, undoubtedly taking turns carrying the burden as they struggled along the long, hilly road from Staadt to the Klause which had to be approached by a circuitous route around the back side of the cliff. 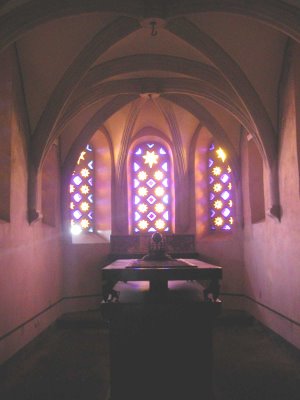 At last, with solemnity, the remains were brought into the chapel. The key was turned in the coffin, and it was opened for the inspection of several of the dignitaries. Then the casket was closed again and shut inside the sarcophagus. Muted light came through the colorful pieces of glass in the main space of the mausoleum's vault. The family tree of the Hohenzollern and the Wittelsbachs decorated the wall over the entrance and the sides. The marble sarcophagus had a bronze plate decorated with the royal Luxembourg family crest, and the king’s crown on which was an inscription telling the story of his death. The sarcophagus was decorated with stones considered precious in the first half of the 19th century. According to the Trier'sche Zeitung of 2 September 1838, there was deep silence and reverence from the huge crowd in attendance.

If your ancestors came from any of the villages near Kastel or from villages along the route the ship traveled on its way north from Mettlach, they probably came out on this August Sunday to see history taking place. The village of Serrig, directly across from the Klause, would have been an excellent vantage point, and I picture my Hauser, Maurer, Rommelfanger, and perhaps even my Rauls and Meier ancestors among the crowd.

Two questions should have come to your mind if you have read to this point. How could a blind king of Bohemia have fought and died in a major battle between the French and the English, and how did his earthly remains end up in a porcelain factory in the Rhineland? My next post will answer both of those questions.