The Life & Death Wanderings of King Johann of Bohemia 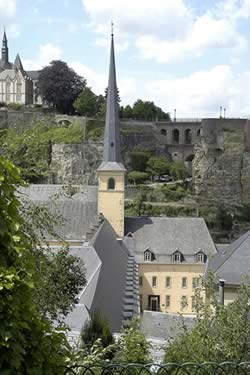 The Neumünster in Luxembourg City

In my last post, I told the story of the 1838 river trip which brought the earthly remains of Blind King Johann of Bohemia from the Mettlach porcelain factory of one Herr Bach to the Klause at Kastel, a masoleum built by the Prince Regent of Prussia. In this post, I want to explain why the bones of King Johann, who was born in Luxembourg, reigned as King of Bohemia, and who died in France, came to be in the keeping of a manufacturer in Germany.

The Travels of the Living King Johann

John of Luxemburg was born in 1296, the son of the German Emperor Henry VII. He married Elisabeth, the heiress of Bohemia and became its king in 1310. According to many accounts, he never felt at home in his new kingdom. He had enemies among the Bohemian nobility who worked against him and, a man noted for his bravery in battle, he was very much an absentee king. He never learned the language, spent most of his time at war, and allowed the country to be ruled for a time by local barons. Nevertheless it was said, "Nothing can be done without the help of God and the King of Bohemia". Bohemia was one of the most important kingdoms in Europe. John's banner, with three feathers and the motto, "Ich dien" (I serve) was that of the Bohemian kings.

After the death of his wife Elizabeth, Johann married a French princess and made France his home, leaving his son Charles to oversee the governing of Bohemia. Gradually Johann lost his sight; and by the time of the Battle of Crecy, he was completely blind. In spite of his blindness, he joined with the French in their battle against the English, binding the horses of two of his best knights to his own horse, one on his left side and one on his right side, commanding them to charge so that he, himself, might have a chance to strike blows at the enemies of France. In spite of 50 other knights protecting this odd threesome on horseback, the blind king was killed on the battlefield on August 26, 1346, along with most of his knights. Legend says that when Johann was killed, his banner was picked up by Edward, the Black Prince, then Prince of Wales. That is why, ever since, "Ich dien" has been a part of the crest of the Prince of Wales.

1. The victor of Crecy, Edward III of England, allowed the fallen Johann to ceremoneously lie in state. The embalmed heart and his entrails were housed in the Dominican Cloister Montargis, where the sister of the Bohemian king, the queen Maria of France was entombed.

2. The King's bones were taken in a ceremonious procession to the Benedictine Abbey at Altmünster in Luxembourg where his son Carl, now the King of Bohemia, erected a monument to his father.

3. In 1542 Francis 1 of France invaded Luxembourg and the outer defences of the city had to be strengthened which meant tearing down the Altmünster in order to better protect the city. The Benedictines took the bones of King John, in a simple wooden casket, to the cloister of the Franciscans in the upper city, and there the blind king's remains rested behind the high altar.

4. By about 1604, the rebuilding of the Benedictine Abbey was started at a new location in the old city, and when it was finished, the remains of King Johann were brought back to this "Neumunster." A discovery was made when his casket was opened. The wooden shrine behind the altar in the Franciscan Abbey had gone unprotected for so long that the theft of Johann's skull had occurred.

5. A report spread that the Earl of Blankenheim in the Eifel had the skull of the Bohemian king, it having been brought to him. The Benedictines wrote many letters requesting the return of the skull. After they were unsuccessful, the Regent of the Netherlands, the Duchess Isabella, interceded with a letter of her own, and in 1630, the Earl of Blankenheim finally agreed to return the skull to its rightful resting place.

6. When the French under Marshall Crequi invaded Luxembourg again in 1684, the Benedictine Abbey was destroyed. But once again the bones of King John went with the Benedictines to a place of refuge in the upper city.

7. The Benedictine Neumunster Abbey again was rebuilt, and King Johann's remains were brought once more to the lower city and given a place of honor.

8. At the outbreak of the French Revolution, fearful of looting by the soldiers who were threatening Luxembourg, the monks of the Neumünster hid the remains of the blind king in the home of a baker who had a sort of a cave under his roof which allowed for a thick wall of this house to be built into a cliff. The Neumunster Abbey was secularized and eventually used as a military hospital and a jail, among other things.

9. The baker was unsure that the location of the remains would stay protected in their cave so he took them outside of the city (some sources say that the baker gave this assignment to the Mayor or Luxembourg when the baker was on his deathbed) to Septfontaines where Jean-Baptiste Boch, owner of the earthenware factory took them under his protection. 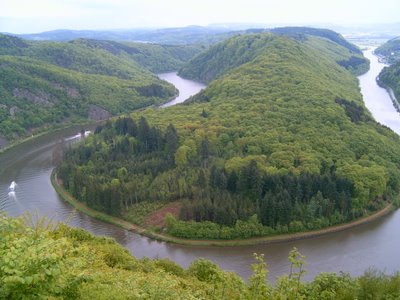 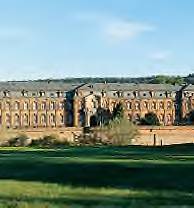 The bend in the Saar at Mettlach

A former abbey, now the porcelain factory for Villeroy and Bach in Mettlach

10. Boch's son moved the factory to Mettlach in Germany, and the remains of the Blind King went with him, resting, for more than 40 years, in an attic bedroom.

11. Frederick William IV of Prussia commissioned Karl Friedrich Schinkel to build the Klause, a neo-Gothic chapel, on a high peak near Kastel. The Klause overlooked the Saar River, almost like one of the medieval castles along the Rhine. On August 26, 1838, King Johann's casket was placed in the Klause 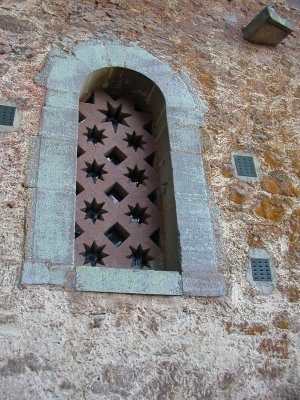 A window of the Klause

12. It should come as no surprise that after World War II, Luxembourg asked that their famous king's remains be returned to Luxembourg and the request was honored. Once again, King Johann's bones were moved to a new resting place.

After eight centuries, have the bones of King Johann finally stopped their wandering? Only time will tell.