The Memorials of our Ancestors - a Correction and a Family History 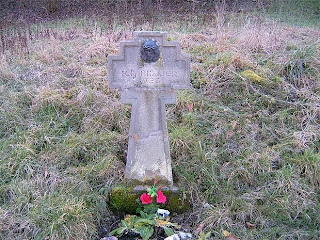 A few weeks before Christmas, I received an e-mail from Ewald Meyer of Irsch, the author of Irsch/Saar; Geschichte eines Dorfes. He had read my November blog post in which I had written about a monument in Irsch which he had described in his history. Now he kindly made me aware of some new information about the motivation for the construction of the Tressel Cross or Tresselkreuz that had come to him. And I will share that information with you, hoping that some searcher will find a genealogical treasure by reading this post, not just a correction of a misinterpretation of a Latin inscription at the base of the monument.

The Correction to my post, "The Memorials of our Ancestors."

Prior histories had guessed that the Tressel Cross monument had been erected by the school teacher of Irsch, Christopher Tressel and his wife because they were, to their sorrow, childless. For that reason, it was believed that they dedicated the cross to the Virgin Mary of the Seven Sorrows and the patient suffering of her Son, Jesus.

"...This monument was erected by the school teacher, Christoph Tressel and his wife, Maria Elizabeth. Legend has it that the couple was childless and that this was a great sorrow to them. Herr Tressel was the teacher, sexton, and founder of the church choir in Irsch. He was also the teacher in Beurig and Ockfen. Thus the monument came to be called the Schulkreuz or "School Cross." It also served as a place where people, in times of trouble, often came to pray to the sorrowful Christ and to the virgin mother of the seven sorrows."

Herr Ewald Meyer had used many historical sources to write his history of Irsch. One was a narrative written by the pastor of the Catholic Church in Irsch in 1979, "Beitrag zur Heimatkunde." It described the Tressel Cross and sought to explain why it was built. Pastor Markus Laser pondered the inscription on the base of the Cross (noting that sometimes it became almost illegible) "Crux erecta Jesui Patienti a Christophero Tressel et Maria Elisabetha (conjugibus) solis in Irsch = Stat oblatas septem doloribus onera (munera) de Mariae (Virginis) voto. 1781. The word "solis" led the priest to conclude that the childless Tressels built the monument as a testament to living patiently with suffering or disappointment.

As so many of us who try to reconstruct a history - whether of a village or a family - know, the most likely explanation does not always turn out to be the right one. After the Irsch history was published, new information about the Tressel family tree emerged. Herr Meyer says it was very accurately researched. There were many descendants of Christoph Tressel, school teacher of Irsch and his wife Anna Maria. The supposed "childless couple" was not childless.

Christoph Tressel, who would become the schoolmaster in Irsch, was the sixth and youngest child of Melchior Tressel (Melchior Tressel was christened 1696 in St. Gervase in Trier and died in Trier in 05.06.1766.) and Anna Katharina Reiter. The family lived on the Neugasse or "new alley" in Trier.

Christoph was born on October 13, 1731 and was baptized on the same day in St. Gervaise Church in Trier. He studied at the former University of Trier in 1750 and passed his examination as a "bachelor of liberal arts". On May 5, 1757 he married a childless widow, Anna Maria Blasius, born Berling, in Pellingen. Her father was John Berling, a teacher and farmer in Pellingen.

The marriage of Christoph and Anna Maria Tressel was very fruitful according to the parish records of Irsch and Beurich. They had five children and Herr Tressel became the school teacher in Irsch where he and his family lived for approximately 50 years.

The Descendants of Christoph Tressel and his wife, Anna Maria (note the male in each generation printed in bold type)

There is no doubt, however, that the schoolmaster and founder of the church choir of Irsch was the great great grandfather of the priest/poet Ernst Thrasolt, whose writings in the old Irsch dialect had been translated by Ewald Meyer, who, at the time, did not know of Thrasolt's connection to the beloved Irsch schoolmaster and choir founder of the 18th century.

Posted by Kathy, the Single-minded Offshoot at Sunday, January 24, 2010