The Memorials of our Ancestors 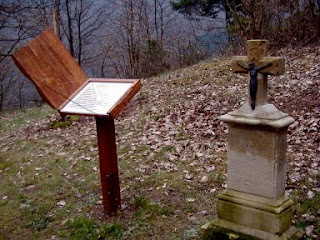 Wegkreuz or way-cross near Taben-Roht
A common sight on television news, whether national or local, is bouquets of flowers, stuffed animals, candles, and perhaps a styrofoam cross, to mark the spot where a tragedy occurred. It is a way of expressing sorrow, sometimes from people who did not know the victim but were touched by their sad story.
Our ancestors had similar reactions to tragedy. Whether they brought temporary objects to express their sorrow is difficult to know. But they, mostly strong believers in God and his mother Mary, also erected markers that stood for a century or longer. And these monuments were not always built to commemorate a tragedy. Although I knew that all of my ancestral villages had sturdy crosses or tiny chapels with religious themes, I hadn't thought about their meaning in more than a superficial way until this week.
What I realized is that times of death were not the only occasions when our ancestors expressed their feelings in a very public way. Here are descriptions of three separate monuments in or near one of my ancestral villages. Each monument was erected for a situation that elicited a strong emotion; strong enough to preserve the memory of it for at least a century.
Sudden tragedy
On the high road between Zerf and Hermeskeil, the monument called simply "At the thick stone" stands. It is a light-colored marker similar in shape to a cemetery cross. It replaces the original wooden cross which stood in the same place. At the time it was erected, somewhere between 1794-1814, the area between Zerf and the Hochwald (high wood) continued to be a dangerous place. It was here that two wagon drivers who were underway with a load of goods were attacked by robbers who had stretched a rope across the rode, causing the horses to fall. After stopping the wagon, the bandits could murdered the drivers and made off with the goods they carried. In tribute and sorrow, a wooden cross was erected which lasted until about 1920 when it was so badly deteriorated that it was replaced with the monument now called the Ottskreuz, since it had stood for a time on the grave of the sister, Frau Ott, of one of the slain drivers.
A Married Couple's Disappointment
In Irsch, on the road leading in the direction of Ockfen, a cross about six feet high was erected in 1781. The upper part was a baroque-styled, arched crossbeam roof that hung over the crucifix. Near the foot of the cross, there was a small picture of the Virgin Mary of the Seven Sorrows. At the base of the monument was an inscription in Latin, indicating that being childless was a great sadness. This monument was erected by the school teacher, Christoph Tressel and his wife, Maria Elizabeth. Legend has it that the couple was childless and that this was a great sorrow to them. Herr Tressel was the teacher, sexton, and founder of the church choir in Irsch. He was also the teacher in Beurig and Ockfen. Thus the monument came to be called the Schulkreuz or "School Cross." It also served as a place where people, in times of trouble, often came to pray to the sorrowful Christ and to the virgin mother of the seven sorrows.
Thanksgiving for Good Fortune
A new-found friend, who lives in France near the German border where my ancestors once lived, sent me the picture above and the story of a Wegkreuz or way-cross monument." She found it not too far from my ancestral village of Serrig, and she knew I'd be interested in a story from that area. But the legend about this monument was not at all what I had expected:
On a cold winter afternoon in the year 1868 a little girl from the village of Hamm caused a schoolroom disturbance that interrupted the instruction of her teacher, a very stern woman. The teacher, as punishment, put the child into a dark little shed where the wood which heated the school was kept.
It was snowing by the time classes were over for the day, and the teacher and the other children had forgotten all about the little girl who was still locked in the woodshed. Later, as the church sexton was going about his appointed chores, he passed by the school. He heard cries coming from the shed and went to investigate. Releasing the child, he told her to hurry home to her parents. Unfortunately, it had already begun to snow in the afternoon and now, in the dark, the child was having a difficult time finding her way. She became more and more disoriented and confused as she wandered until, finally, she sank down into the snow, exhausted. A miller, traveling was on his way from Hamm to his own village of Taben-Roht when he heard whimpering. He searched and found the child and walked back the way he had come in order to see her safely home again.
The parents were so grateful that, in thanksgiving to God, they erected a cross, known as Barschels Kruez, or Barschels Cross (Barschel is the small district where the little girl was found). The cross of gratitude lasted for almost 100 years and then was rebuilt by the village of Taben-Roht in 1999 in order to highlight this piece of the area's history.
As our annual celebration of Thanksgiving, with its family gatherings, good food, and (usually) football approaches, this last memorial has made me think - of all of the times, big and small, when what could have been a tragedy turned into an occasion for my own personal thanksgiving day. While it's probably not possible for me to build a memorial, at least I hope I remember to buy some flowers to give thanks the next time I experience such an instance.
Sources:
*Christoffel, Edgar. Der Hochwaldort Zerf Am Fusse Des Hundrücks Landschaft; Geschichte, Kultur; Gegenwart. Saarburg, Verlag W. Rassier, 1981
*Meyer, Ewald. Irsch/Saar; Geschichte eines Dorfes. Geminde Irsch, 2002