Reading at the Breakfast Table 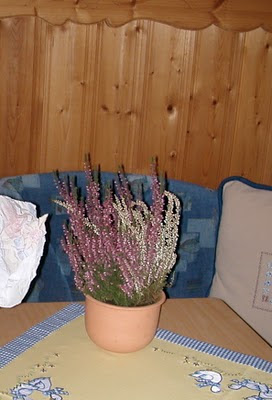 Usually when I write a post, I pick a topic and try to collect all the material I've accumulated on that subject. Not this time! Why? Because recently I found some unused information from notes I took several years ago when I was exploring and gathering data from my Rhineland ancestors' original homeland.

Herr Ewald Meyer whom I often mention in my blog posts had loaned me some books from his own library; titles he thought would be helpful in my quest for local knowledge. The only drawback was that they were in German and reading them was very time consuming. So each morning, after I finished my breakfast, I would sit at the table in the pretty kitchen of my rental apartment, sip my remaining coffee, read/look up unknown words/take notes on things that interested me.


Of course, I no longer have these books. Herr Meyer wanted them back when I went home to Wisconsin and there was no way I could finish reading them. But they did have information that examined rural life in the Eifel, an area very similar to my ancestors' Kreis Saarburg villages. And even though the notes were pretty miscellaneous, I figured I could add them to the rest of my data at some later time.

Rather than lose track of these hard-earned notes again, I'm posting them just as I took them. The blank box at the very top of the Blogger page allows both you and me to "word search" all the "mischmasch" I'm going to post as well as any other topic. 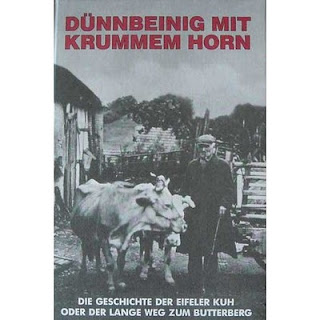 Notes from "Thin Leg with Crooked Horn; The History of the Eifel Cow, or the Long Road to the Butterhill"


Eifel cows were a reddish color. They had a small head, thin neck and fine short legs along with a high swinging tail. They were healthy, liebhaft, light on feet, fairly resistant to disease and didn't require much maintenance.

The stall for the cattle was usually a place with hardly any light, small windows, damp walls, and a strong odor of manure. Sometimes the same barn or stable area held the pig stall, and chickens. The floor was made out of limestone or sandstone plaster. Some straw was placed under each cow but that didn't prevent them from lying in their own waste at times because there was no place for urine to go. Barns were cold in in the Eifel. The manure was kept in the stall in winter to produce a little heat. As the manure was covered again and again with straw, a cow got closer and closer to ceiling. The outer door was not opened very much to keep heat in when it was cold. Another door to the barn led right into the hall in the Wohnhaus (house and barn were together) and the farmer could go into the barn from that hall without losing too much heat.


The feed for the cows (and also for people) was rye and oats as both grew very well in the Eifel. Then they began to plant potatoes as well. Potatoes had been planted at the edge of the Eifel since the 18th Century. But it was only known as animal food. Then, at the end of the 18th century, terrible poverty forced people to eat more of what the cows ate. The people found potatoes were good nourishment and could be made into many tasty dishes. And one could plant potatoes year after year without exhausting the earth.

Cows were an important part of farmer’s livestock but they were expensive to buy and to feed if they were to be productive. The land wasn’t always good for cow pasture so sheep were also important farm livestock. Sheep could eat just about anything and eat well.

The year 1816 was terrible. In the Eifel snow stayed until June and then fell again in November. The potates froze in the ground and lay under the snow. People again had to eat like the cattle - minus the potatoes. They gathered a type of walnut from trees that grew in the region and grind it for flour to bake bread. In spring, there were no potatoes to be used for the following year's planting so the next year was difficult too.

In Kreis Witlich and Prum, the oldest son got the majority of the land and the other sons were paid off with a very small sum. They had to stay unmarried and do things around the farm just to have bread and butter.

But in most of the Eifel and the Rhineland, everything was divided up among all the heirs of the family. The measure at this time was the “morgen ha” method, and it seems that using the "morgen ha," land could be divided into extremely small portions. Five Prussian morgen were equal to 1.27 ha or 12.700m2. A common soccer field is equal to 7.140m2. The average farmer didn’t have any more land than 1 ¾ of a football (soccer?) field for his whole family.


In the 19th century, there were good years when a farmer could produce enough to sell as well as to maintain his family. Unfortunately, usually that meant that all the other farmers were trying to do the same and so almost no money could be made. But they traded butter, eggs and cheese with tradesmen in the village for their wares.

Common cheese was cottage cheese. Butter milk or thinner milk was placed in crock or kettle and kept in a warm place. The fermentation process would start, and little clumps would form in it. To speed up this process you could warm it on the stove. It would take on a yellow color and be thick enough to cut with a knife. They would cut cheese into four parts and then they would put it into a sieve and cover it with a linen cloth. The thin milk came to the top and would be given to the calves to drink. About half an hour, salt, milk and carroway seeds were added and they let it finish. When it was ready one could have for several meals from it and eat it as bread covering. It also would be tasty with pickled beets and two pieces of bread. In the Eifel they made soft cheeses. 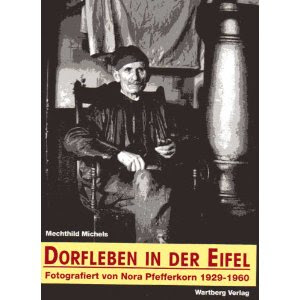 Notes from "Village Life in the Eifel."


In the Eifel the usual dress of the farmer was a blue linen smock, home sewn, used for the daily, often dirty jobs of his workday. It had a partially open front that tied at the neck. The "zipfel" or stocking cap, knit by the wife or Oma, was headwear.

The older farmhouses (1700s) were entered by the kitchen with all the rooms leading off of it. But by the 1800s, there was a hall or staircase that served as the first entrance. The sleeping rooms were above and simply furnished with an oak bed, straw mattress, home woven bed linen, a heavy featherbed, a cradle and a chest. The kitchen had a stone sink.
When a farmhouse was built, the custom was that the farmer drove in the first nail and for each blow needed, he had to provide one bottle of brandy. Before the carpenters began the work, the farmer must pound in the first nail. Once the roof beam was erected, the carpenters placed a decorated spruce tree on the top. The master carpenter then recited an old maxim or words of wisdom. Decorating the tree was from an old widespread belief that this was a magic defense. It should keep away lightening and hardship from the house and its inhabitants.
Quite a few sheep were kept as livestock by small farmers. Before the sheering, a farmer would dunk each sheep in a water pond. This was a way to clean the fleece so that when sheered the wool was clean. After its bath, each sheep would run around in the field to dry before the sheering.


Blacksmith work was mostly shoeing horses, oxen and cows – because each of those animals could pull a wagon or plow. The blacksmith also repaired the metal parts of wagons and wheelbarrows. He had many tools and often served as the veterinarian too, doing surgery with a little knife which he kept in his pocket.


Workday shoes in earlier days were handmade with pins and little nails. The Sunday shoes were made with better leather tops. This raw material came from the tannery; in villages without a shoemaker, sometimes traveling shoemakers stayed with customers in their house. Then on Sunday evenings all people in the village came together and the traveling Schuster would tell them the gossip from other villages along his path. Weeks before a holiday, the traders would come into the village and bring pots, pans, kettles, buckets and household articles because of the cleaning and cooking that would go on.

If you needed a table or a cabinet or a bench of wood, you might go to village carpenter who made these things. That was true especially of the big furniture pieces made of oak as well as doors on the cupboards and table tops.

My notes end here and so does this blog post.

Posted by Kathy, the Single-minded Offshoot at Thursday, March 04, 2010