Everything Under One Roof 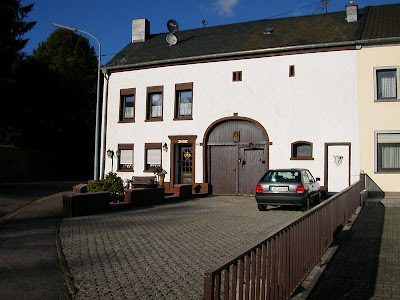 Restored Quereinhaus
Alles unter einem Dach or "Everything under one roof" describes very accurately the farm buildings of the Trier region. It was also the title of a symposium at the Roscheider Hof Freilichtmuseum in 2000. Experts on the architecture of the German, French, and Luxembourg border regions shared their knowledge on the subject with a focus on saving this unique architecture.

The papers presented at the symposium were published under the same title. The copy that I have is written in German and French, since the participants came from countries that spoke one of those two languages. That helped explain to me why I rarely found articles in English about the farm dwellings of my ancestors. I had diagrams and pictures of Bavarian or Pomeranian or Westphalia farms, but the unique style of barnhouse that I saw when I visited the Trier area was rarely described. The architecture was not wholly German. It was very much like that of two other countries, France and Luxembourg. It is rather like an unacknowledged child that no one talks about - or so it seems to me.

Not too many of these "mixed architecture" farm buildings remain. They have been destroyed: either by WWII bombing, natural disaster, or by the desire of an owner for a more modern structure. Some still stand, but they have been modified to the point where the original architectural style has been mostly obliterated.

There are exceptions. The owners of the house in the photograph above have worked hard to maintain the important elements of what is often called a "Quereinhaus" or a "Trier Einhaus." My German is not good enough for me to distinguish a great deal of difference between these two terms: for that reason, I will call the typical house from the border regions of the German Saar-Mosel, Lorraine, and Luxembourg regions a Quereinhaus.

More about the 19th century's Quereinhaus

Christopher Becker, who wrote a very good walking tour of the village of Irsch (my ancestral village) points out that the Trier Einhaüser (Trier "one-houses") in Irsch were typically disordered rows of wall-to-wall houses. This is known as the Trier Zeile (row), where the house walls do touch but also jut in and out instead of following a straight, smooth line. A few such examples remain in Irsch, in spite of the heavy destruction during WWII. Some of the Quereinhaüser spared by the war, such as the one above, have been carefully restored. Ideally, the doors of these restored houses should be of oak; the windows and doors remaining as they were in the earlier century (that is, they should be the original shape and bordered in the original style).

One of the striking features of many of the Quereinhaüser is a large stable door which is shaped like a rounded arch, giving the barn half of the structure a pleasing decorative aspect. The family's living quarters section had a house door and several windows, sometimes with shutters. The Quereinhaus was usually a two-story building.

The inside of the Quereinhaus was divided by a hallway that ran from front to back, splitting the building into two halves, with the kitchen, Stube (where the family ate and rested) and sometimes a bedroom on one side. On the other side were stalls for horses or cows and the threshing floor, etc.

In addition to a garden at the back of the house, there was usually a pig sty and a woodshed. All this was enclosed by a stone or stick fence, making a small Hof or "courtyard".

An original QuereinhausThe premises in the picture below was built in 1850 (inscription above the door: AR 1850 MC) and is nearly completely preserved in its original form today. I found it on the website of a small town called Fastrau near Fell. According to the site: "The house has been unoccupied for a long time, and still features the typical wood (framed?) glazed windows, the original classical door panel and the original white sandstone trimmings around windows and doors. The wide archway features an ornamental capstone at the centre. A smaller door is set into the larger double doors. The slate roofing of the half-hipped roof with the wooden cornice board is also typical. The cellar belonging to the property is accessible from the main road via a portal with sandstone trimmings and a mighty capstone. The façade has been plastered over, while the gable ends were left in their original beautiful local slate rubble stonework state." 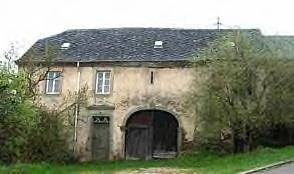 The diagram for the Fastau Quereinhaus helps identify some of the primary features of this house: 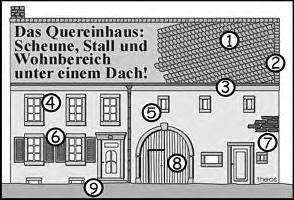