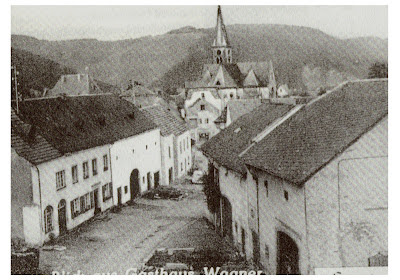 Street in Village of Serrig

In my last post, I described the exterior of the Trier Einhaus, also known as the Quereinhaus, the typical farm building in the border regions of Germany, France, and Luxembourg. These all-in-one-style barnhouses sometimes stood alone on a piece of property. But many were built wall to wall, so that the only way to get to the garden behind the house or the fields and meadows was through one's own back door or the door of a neighbor.

It occurred to me that my housing is very much like that of my ancestors in the Trier/Saarburg area. I live in a two-family condo. Like the Einhaus dwellers of the 19th century, my neighbors and I have two story "houses" that are connected (without stable and stalls, however), because we share a wall. Condo and townhouse dwellers can enter their dwellings from front and back just like the families who lived in the wall-to-wall Einhaüser. Obviously there are no windows to the outside on any shared walls. What goes around comes around?

Advantages of Living Wall to Wall

*There were advantages in a wall-to-wall Quereinhaus. Sharing a wall or living wall to wall prevented heat loss in winter and helped keep the rooms cooler in the summer. So comfort was improved for both parties.

*Maximum use was made from available village land.

*For the families in the Einhaüser, there was the protection and availability of very close neighbors in times of trouble.

Disadvantages of Living Wall to Wall

*A major disadvantage of living wall to wall or sharing a wall, especially in the days before fire codes and fire-proof building materials, was the ease with which a blaze could spread quickly from one Quereinhaus to another. Although the picture postcard above is from Irsch's neighboring village of Serrig, the houses in both villages were similar. Thus the village of Irsch must have looked much the same, even in the earlier part of the century when fires broke out and raged through three villages.

Fire Catastrophe: In the summer of 1842 separate fires destroyed Einhaüser in three villages: Irsch, Wasserbillig (54 houses), and Coenen (16 properties). Ewald Meyer, in his book "Irsch/Saar: Geschichte eines Dorfes" says that 34 dwellings and 22 stables in Irsch went up in flames as the fire raged, leaving 500 residents either without a roof over their heads or lacking barn or shed. Certainly the wall-to-wall buildings were in the greatest danger of being completely destroyed as fire spread easily from houses built so very close to one another.

*Another disadvantage of wall-to-wall residences must have been the difficulty of striking an agreement when ones neighbor wanted to change part of the structure or build a new structure. Today we have such things as condo agreements. To my surprise I learned that, as early as 1821, there was an example of a contract that was not so different from the condo-change agreements of today.

New Construction: The document found by Herr Meyer, the author of the book mentioned above, was called a "House Allocation Contract." It was discovered in the Irsch community archives. It clearly addressed the matter of building a new barnhouse in Irsch when two families owned Quereinhauser with walls that were side by side, no space between. I found the detail fascinating. With help by e-mail from Herr Meyer, I think I now have a mostly clear understanding of those details.

The contract was handwritten by the schoolmaster, Herr Romey who, in addition to his position as schoolmaster and sexton for the church, also served the head of the village council and the Burgermeister as document writer. The contract was between Johann Klein and Johann Konter of Irsch. Together, they jointly owned the two wall-to-wall Einhaüser referred to in the contract.

The top of the document has the typical offical stamp with the Prussian Adler (eagle) and shows that the fee for this contract was 1 Groschen 7 Pfennig. It is dated March 13, 1821. The two houses, the barn with its stalls, and the outer garden and Hof (small area of storage space) were owned in common by the family of Johann Konter and Johann Klein.

The first item of agreement was that the hereditary rights for the old house would go to Johann Konter, his wife Helena, and their descendants. Johann Klein and his wife Kathrin would own the new house with barn and stalls. In other words, the two barnhouses would no longer belong to both parties. Klein was required to build his new barnhouse to strict specification so that it would match, width and height, with the gabel side of the Konter dwelling. The agreement spells out the size in detail, using the word Schu as the measure. For instance the wall of the new barn had to be 21 "true" Schu (21 Schu equal 8 meters or a little over 26 feet).

The actual building process was clarified in the contract. It seems that the walls of the adjoining structure owned by Herr Konter would be heavily damaged in order for Herr Klein to build the side wall for his new structure. If Herr Konter helped with labor, which consisted of breaking down the stone walls of Herr Klein, he would not have to pay the cost for any work to fix or rebuild the wall of his own dwelling. However, Klein would receive whatever wood was salvageable, no matter which house it came from. Klein was allowed to use straw as the roofing for his new building, if that was allowed by ordinance. (Because of the increased risk of fire spreading more easily, straw roofs were little by little being outlawed. There was the possibility that this could happen before the new structure's roof was begun. By the middle of the century, Prussia had outlawed straw and shingle roofs in newly constructed buildings, requiring tile of some kind, in all the lands it governed).

The back gardens and Hof, the outdoor work and storage spaces next to the gardens, were at an angle to a Herr Tressel's garden. This had to be taken into consideration in the building project. There had to be a way to get into and out of all the gardens of all parties concerned.

Both husbands and wives "signed" the contract, using their housemark rather than a handwritten signature. (see archived post of Aug 6, 2005 for a full explanation of the Rosenkranz and resultant housemarks). The housemark of the construction master, Herr Michel Brausch, is also on the contract, along with the names of three other men who were probably associated with the construction master. In all, six housemarks appear, not including the two witnesses and the signature of Herr Romey, the writer of the document

If you thought that detailed contract paperwork and condominium living were marks only of our times, think again. Your ancestors who lived in wall-to-wall Einhaüser seem to have known all about it.

Posted by Kathy, the Single-minded Offshoot at Thursday, September 06, 2007