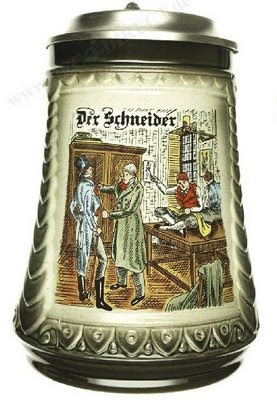 The Schneider's helpers in sewing position

If you go to an Archive such as the one in Koblenz where your ancestors' emigration papers are preserved, a well-meaning archivist may caution you that there is not much point in trying to use these documents for genealogical purposes. If you already know the names and the birth dates of the immigrants and the date they left for North America, there is little to be gained by reading “boiler plate” documents that are the same for everyone.

Sometimes this is true. But in many applications there are tidbits of information that are precious to those of us who want to develop a robust family history. This was certainly the case for my 2nd great grandfather's younger brother, Michael.

Michael Meier was a 24-year-old tailor when he applied for permission to emigrate to North America in September 1856 according to an index in the Family History Library in Salt Lake City. Before my trip to the Koblenz Archive to find his actual emigration documents, I had viewed him as a daring young man who wanted to explore a new country. He was single; therefore he was free to take chances. He had dreams of wealth and prosperity in a land of freedom.
After having his emigration papers translated, I have begun to envision a very different young man.

We start with Michael's letter for permission to leave Irsch for a better life in America. (I've noted in bold the information I feel is important in understanding Michael's story). This letter was the first step in the immigration process and probably dictated to Michael by Burgermeister Bodem.

A most obedient petition of Michael Meier, 24 years old, tailor at Irsch, requesting permission to emigrate.

Your Grace,
I give a most obedient notice that I am of a mind to emigrate to America immediately. The reason for my emigration lies in that I have a sister there who has been there for a year. I wish to visit her and at the same time be able to be trained in the profession of a tailor.

Regarding military service duty, in my view, nothing stands in the way. In 1854 I was declared by the … Department Reserve Commission to be totally unfit for field and garrison service. Therefore, I promise not to join the service of any foreign army, rather only intend for the mentioned purpose of emigration. But because I need a permission to emigrate for this purpose, I take the liberty, your grace, most obediently, to petition, most graciously, that you request for me at the respective office [of Saarburg]

Along with the application papers sent from Beurig to Saarburg to Trier, a verification of Michael's unsuitability for induction into the Prussian military service was included. In summary it said that in 1854 the military commission in Saarburg had declared Michael Meier to be completely unfit for military service because he was too short and also because he had ulcerous sores on his feet. It was noted that Michael had not yet contracted a ship passage with any agent.

Before I had the information above, I sometimes wondered why Michael had chosen to become a tailor. He came from a family line that had been land-owning farmers for several generations. Yet Michael did not want to work on the land he and his only brother would inherit from their father. Learning about Michael's problem with foot sores, I could guess at the reason for Michael's occupational decision. A tailor or a tailor's helper could spend much of his work day sitting and sewing, as illustrated in the decorative beer stein above.

According to information in the German version of Wikipedia, the tailor sat in a cross legged or Schneidersitz position on a wooden table. This was a good method for sewing long seams and keeping the fabric off of the floor. The four most important tools of a Schneider were needles, thread, an ell measure, and a scissors.

The same Wikipedia article also described the pecking order in the tailor's workshop when guilds ruled the lives of all craftsmen. The master tailor was in charge. He had started as an apprentice, moved on to become a journeyman/Geselle and finally was certified as a master tailor. There were also Nähknecht. These were semi-skilled assistants to the tailor and not usually eligible to rise into a higher position because of physical disability or health problems. They learned only the basics of sewing, mostly closing uncomplicated seams. They would be found sitting on the wooden table stitching side seams, trouser seams, sleeve seams, etc.

An article in Der Blumenbaum, the Quarterly Newsletter of the Sacramento German Genealogical Society gave a good deal more information about the tailor's craft. Here is a brief summary:

Young men started as an apprentice in a trade, such as shoemaker, capenter, blacksmith, tailer, etc. After three to six years of training, it was time for a young apprentice to prove his worth and learn from other masters and from a variety of experiences in order to become a master himself. In English, this would be a journeyman, in Germany a Geselle. And "journey men" they were, for they were required to leave their home villages and with empty pockets travel to other villages and towns to work for masters who could teach them new techniques and where they could perfect their craft. This journey lasted three years and one day and was known by its common name "on der Walz" (on the journey). And it was a journey, for the Geselle could not wander closer than 30 miles to his home village. 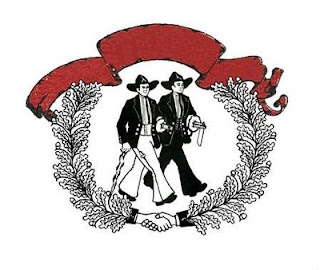 The early journeymen belonged to the guilds of the middle ages and the tradition continued into the 19th century. Usually an experienced journeyman accompanied the new Geselle for a week or two. After that, the young man was on his own to find work - but never for more than three months in one place for he must remain a traveler, a stranger.

A uniform of sorts identified the Geselle as an honorable stranger in the town and also indicated what kind of craftsman he might be. A wood worker of any kind would wear a dark color like brown or black, the color of wood. Lighter colors like gray or beige, were worn by men who worked with stone.

Even more than clothing color, the eight buttons set in a double row on his vest, his pants with a flared leg, a collarless white shirt, and a coat with six buttons were signs of a free journeyman out in the world to sharpen his skills. The eight buttons on the vest were meant to represent his eight-hour workday while the six buttons on his coat signified the length of the work week. His hat was one of two kinds. Schlapphut was wide brimmed and floppy as in the drawing above. The "Zylinder" was a top hat, either half or full size. A tie in the color of his guild or lodge completed his traveling uniform.

He carried only few items. One was a "Stenz", a carved cane; another was his pack in which he kept his work clothes and a satchel with his tools, and his diary or Wanderbuch. In it each master for whom he had worked recorded the date and place of the labor. The master also prepared an "Empfehlungskarte, a card similar to a letter of recommendation that vouched for the competence of the Geselle. 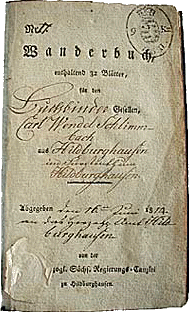 
With the invention of the sewing machine in the middle of the 19th century, the work of the tailor underwent a fundamental change. Long seams were closed by the sewing machine, not by a Nähknecht, an apprentice, or a tailor sitting on a table.

With all of the bits and pieces of information I have learned about young Michael Meier and his chosen trade, my instincts tell me that he was not that adventurous young man off to make his fortune in America. Michael had limited options. He had sores on his feet that prevented marching with an army. Work on the farm required constant standing and walking during the growing and harvesting season. He had chosen a craft that would allow him to earn a living in spite of this handicap. But in order to advance from an apprentice to a skilled master, he was required to walk from town to town to town for three years. This was not something he could undertake. He was trapped as a Nähknecht, sewing long seams for a master who would pay him very little.

His sister Anna and her husband lived in America. Without the strict guild rules for a German master tailor, Michael might have a chance at such a position for himself, learning the trade without making a three-year journey in order to qualify. Did he want to be more than a poorly paid tailor's helper?

Five years later, in 1861, when Michael's brother Johann applied for emigration permission, Mayor Bodem of Beurig penned this explanation as Johann's reason for leaving Irsch: "...to emigrate to North America where he already has two brothers-in-law." Johann did not mention having a brother in America.

So while my knowlege of Michael's life in Irsch is now much clearer and while I have learned so much about the difficult road to becoming a craftsman of any kind, Michael's journey after he obtained his emigration papers remains a mystery for me. I have not been able to find a good match for him in any US census or any ship passenger index. What happened to Michael after September 9, 1856? Did he reach America? Oh how I'd like to know!


Posted by Kathy, the Single-minded Offshoot at Friday, March 06, 2009