Herr Burgermeister Bodem and his Angel 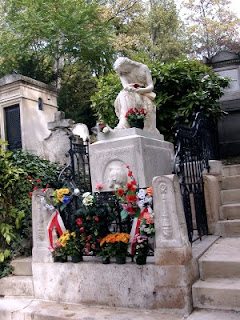 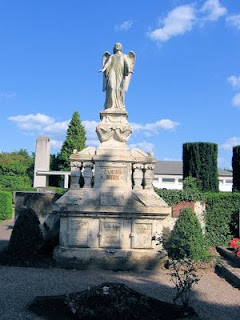 Bodem family monument, Beurig church cemetery
When my sister and I were in Paris a few years ago, we went to visit the city's most famous cemetery, the Cimitiere de Pere Lachaise. I was amazed at the size of the monuments of the prominent Parisians (and a few outsiders of great fame such as Chopin) buried there.
When I received the e-mailed photo above from Ewald Meyer who lives in Irsch but who was born in the neighboring village of Beurig, I wondered if he and his wife had made a trip to Paris recently. It had never occurred to me that a monument of such enormous size might reside in the cemetery at Beurig, which at about the time the tombstone was constructed, had a population of less than 1,000.
Then, when I read his explanation, I knew I had another case of class distinctions, similar to the sumptuary laws affecting clothing which I described in a recent post.
This is a summary of what Ewald Meyer wrote, knowing that what he told me would be of great interest both to me and probably to the people who periodically read this blog:

I am sending you a photo from the cemetery in Beurig. Here stands the monument of the Bodem family. Nikolaus Bodem was Bürgermeister when Johann Meyer (my 2nd great grandfather) emigrated to USA in 1861. Irsch was only a village in the Kingdom of Prussia. But any civil servant was a very big man within the Monarchy. John Meyer (a farmer) was only an (unimportant) subject of the Prussian king.
While the grave of ordinary citizens would be assigned to someone else after 25 years of non-usage, the graves of the prestigious remained untouched, even when no more relatives of the family lived in the city or village. The bombastic grave monument (of the Bodem family) is a testimonial to past times.
Because Nikolaus Bodem, as mayor, was a senior Prussian official with a superior position, his entire family was considered to be "upper class. The family tomb (not surprisingly) is the largest of the Beurig village cemetery. Even the wife of the Herr Bürgermeister Bodem is dubbed the "Frau Bürgermeister" in the engraving on the far left of the tombstone (where she is buried).
The mayorality of Irsch-Beurig was then a relatively small administrative area. It included the towns of Irsch, Beurig, Ockfen, Schoden and Serrig with a total of about 3,000 inhabitants. The administrative office was in Irsch, the largest village, which in 1810 had 982 inhabitants. But on November 1, 1833, the Prussian government moved the mayor's office to Beurig, a village of about 500.
Nicholas Bodem was born in 1803 in Irsch and died in 1885 in Beurig (where he had moved when Beurig became the mayor's administrative office). By the time he died, Beurig was the largest city of the mayorality, surpassing Irsch. It had become a railway stop for the area (including Saarburg, the district office for the Kreis) in 1860.

The cemetery in Beurig is now owned by the city Saarburg, because the two communities were incorporated in 1935 into the county seat Beurig-Saarburg. Now graves have defined periods of use. After no more than 30 years (from the date of the burial), a grave will be leveled and prepared as a new resting place.
The Bodem tomb which still stands in the cemetery is in a special section. These are the burial plots that are from the Prussian period of the 19th Century. They were the resting places of the wealthy families of the time, and regarded as self-acquired property. These are tombs for officials who were in royal service (eg, mayors and foresters) or for estate owners. Some of these family graves are still used by descendants. In other cases, there are no longer descendants. These graves are neglected as is the burial place of Herr Bürgermeister Bodem. Frau Trimborn (whose name can be seen at the far right of the photo) was the last descendant of the Bodem family.
It seems that the Herr Bodem, who was the mayor for 48 years, from 1831 to 1879, has a monument as tall as his term was long. Unfortunately, his family line's time in Beurig was much shorter.

Posted by Kathy, the Single-minded Offshoot at Tuesday, September 08, 2009