Three generations Living Under One Roof

Sometimes you have to think outside the box; other times the box needs to be flipped!

In my last post, I described the house-barn-stables of my great-great grandparents.  Most of my information came from Ewald Meyer, who had obtained the 1927 building plans of the property from the current owners.

I thought I had understood that data pretty well, but I had a tendency to forget that the plan which I had before me was not from the year 1860 nor from 1828, when the Kataster map, which came with the tax documents,  was published.  In 1828, Johann Meier was only 3 years old and had a one year old sister.  They lived with his father and mother, who were newly married, and with his grandfather and grandmother.  In this scenario, there were three adult couples and two children.  Johann's father Matthias also had two unmarried brother who undoubtedly lived with the family until 1847 when  this youngest son of Michael Meier (not much older than Johann Meier) married a widow from Freudenberg and went to live there for the rest of his life.

In the 1860s, as I said in the previous post, there were four (sometimes five or six) adults and five children in the living area of this very small barnhouse.

That led Herr Meyer to contact me and point out some possible misconceptions on my part.  It was obvious I pictured eight to ten people shoe-horned into tiny rooms on the first floor.  His ideas made a great deal of sense and helped me understand how a family with a very small barnhouse managed to live together in what seemed an impossibly small space.

The following are the thoughts sent to me by Herr Meyer after he had read my February blog post.  They completely reoriented my thinking, and my plans for describing the Meier family's living quarters as I continue to write their story: 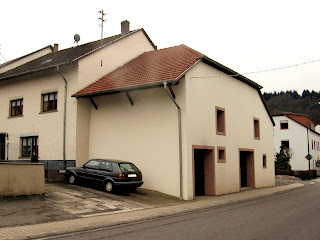 "The building owned by Johann Meier in 1860 reached to the street in front of the house. In the picture (which was taken in 2011) a car is parked there. On the ground floor there was house, barn and stable. You have correctly determined that the house was quite small for all the Meiers. This applies to the ground floor. There, the interior dimensions of the living space is so small that there was scarcely place to live. I suspect, therefore, that there were also rooms on the upper floor, which passed over the stable. It even had the advantage that these spaces were, due to the underlying stable floor, heated!  In comparison with the attached neighboring houses on the street, the building of the Meiers was small."

Now I could understand how as many as ten adults and as many as five children had managed to live in the small space at one time or another. And because I often forget just which people lived in this small dwelling in 1828 and 1860, here is the list of family members who probably resided in the house for those two specific years:

The Meiers lived in a small structure compared to those of many of their neighbors. They had no place for a garden near the house, their two garden plots were far away. If they had a rough bench where they could sit on a Sunday or on a rare day when their farm work was finished before it was time to get a little sleep and start working all over again, that bench was in the road. And if I guess correctly, so was the manure pile. In spite of those almost impossible living conditions, the family was able to dream and to find their way to a new land. But meanwhile, in the interests of my further orientation, here are two maps from the http://www.irsch-saars/denkmaeler.htm.de website which show the street names and the buildings and monuments known to the Meiers while they lived in Irsch.


Posted by Kathy, the Single-minded Offshoot at Thursday, March 31, 2011