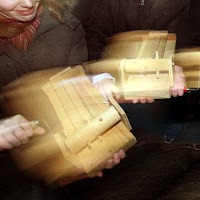 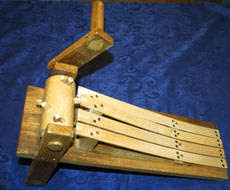 My very first post to this blog in 2005 was about the Easter customs in small villages in the Hunsruck.  But I've learned that the season leading up to Easter deserves mention as well.  Here are some bits and pieces.

The Rheinlanders of today are still known for their Karneval celebrations which have the flavor of  Mardi Gras.  This was also true in earlier centuries.  Karneval can be traced back to pagan Roman festivals.  That may explain why Köln, Mainz, and Trier, which are ancient cities with Roman history, go all out for their carnivals on the Monday and Tuesday before Lent begins.

In the Middle Ages, Karneval gave the people a break from the tightly structured class system, as they were able to hide their social background behind imaginative masks and costumes. Poor people were able to mix with all other levels of society and share the celebration with them. In those days people would dress up as knights, damsels and even priests as a way of poking fun of them. In a similar way, people these days sometimes wear masks which make fun of well-known politicians or celebrities.

In the small villages, the two days before the beginning of Lent or the Fastnachtzeit were celebrated in a variety of ways.  For instance, on the Monday before Lent, Rosenmontag, in the Hunsruck villages of Kreis Saarburg, the mothers baked special little Küchlein on the Monday before Easter.   These were round or longish raised cakes similar to our doughnuts.  They were made of flour, egg, a little sugar, and yeast.  When the dough had risen, each doughnut/cake was fried in an iron pot in extremely hot oil.   After the typical Rosenmontag meal of potato soup, the boys in each household would spear a Küchlein with a sharp stick.  Pulling on a stocking cap and a mask, they went from house to house with their spears, asking for eggs and ham.

On the Tuesday before Lent (Fastnachtsdienstag), in many of the small Hunsruck villages, one would probably find the Fastnachtsbären, the "Mardi Gras" bear.  One or two young men were wrapped in straw.  After they put on bear-head masks, they were chained or tied together and led around the village by their keepers.  The straw bears growled and danced to the tinny sound of tambourines. The bears pranced their way to each house door and growled ferociously until their "keepers" were given ham, eggs or money.  Later there was a happy celebration by the bears and their keepers in the local Wirtshaus.

Lent began with fasting toward the end of winter.  When the farmers in Kreis Saarburg began their spring farm work, it was the sign that Karwoche, the solemn week leading up to Easter was not far away.  This special week of preparation before Easter was filled with religious customs, many from medieval times.

"Kar" comes from Old High German word "kara" meaning grief, complain or grieve.  Thus it was a week to meditate on the events leading up to Good Friday, called Karfreitag in German. The customs of the week, some with a history going back to the Middle Ages, were meant to symbolize the inner grieving for Christ as he came closer and closer to his crucifixion and death.

In Catholic services, one of the signs of mourning for the suffering and death of Christ was (and still is) the cessation of the use of any kind of musical instrument or any bells on Gründonnerstag,  Holy Thursday.  After the organ and choir performed the Latin "Gloria" of the mass, the choir sang a capella and the organ and bells were silent until Easter Sunday.

Thus in Kreis Saarburg, during processions and at mass, Kleppern or Raspeln took the place of the bells from Karfreitag on.   Instead of tolling the bell, altar boys with wooden ratchets or clappers walked through the streets or from house to house, usually in procession, reminding people of the solemnity of the day.  There sounds were also a substitute for the ringing of the church bells for the Angelus at six a.m, noon, and six p.m.

Some historians believe that the Kleppern and Raspeln were used in pre-Christian times to scare away the ghosts of winter in order to make way for the spring season.

Ewald Meier, the author of the book "Irsch/Saar: Geschichte eines Dorfes" demonstrated one of the Raspeln for me when we visited the village museum in Zerf.  There should never be one unceasing sound for the Raspel, Ewald said, but rather a rhythmic tempo.  Ewald described his particular style as this: rum-pause-rum-pause-rum rum rum.  A boy beside him might use another rhythm, those coming behind chose distinctive rhythms as well.  There was quite a noise as several boys walked the streets of the village together, performing their Karwoche duty.

Finally it was Easter Sunday.  The Hunsruck area Easter customs can be found in my blog post about Easter in the Hunsruck.