The Poorhouse of Trier 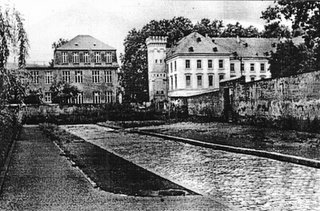 The Library of the Latter Day Saints in Salt Lake City, Utah, has a large collection of bound volumes with an amazing breadth of subject matter. On my last trip to the library there, I checked the on-line catalog for books about the Kreis (county of) Saarburg. I found a few titles and then, as I often do, I browsed the surrounding shelves to see what else might be cataloged in the vicinity of the Dewey Decimal number for Saarburg. That's how I stumbled across the following book by Thomas Schmitt, Die Insassen des ehemaligen Landarmenhauses des Regierungsbezirkes Trier, Saarlouis 2000 ("The insane in the former state poorhouse of the Trier region"). *

Economic Realities:
While a description of the Trier poorhouse may be a somber subject, it is undeniable that the population of the Trier region often suffered from hard times in the 19th century. During these periods, poverty and hunger plagued city and village alike, and for some people destitution and the poorhouse became a reality.

There were a variety of reasons why people were no longer able to support themselves or their families. The tax burden imposed by the government, first of France and then of Prussia, was heavy. There were crop failures caused by early frosts, drought, or blight, especially the potato blight of the 1850's. Epidemics, such as the cholera outbreak of August 1849 killed entire families, leaving young children homeless orphans. Sudden, severe drops in the prices paid to farmers for crops or to craftsmen forced belt tightening. The entire community was affected by such misfortunes, but some population groups suffered more than others. The Tagelöhner (day laborers) were particularly vulnerable to changes in the economic fortune of the landed farmers and craftsmen. When they were unable to find work in their villages, many day laborers moved to the city of Trier, looking for employment, usually finding similar if not worse conditions than those they had just left.

Founding of the Poorhouse
In 1812, the French founded a governmental poorhouse for those unable to support themselves. After the defeat of Napoleon, Trier, along with much of the Rheinland, became a part of Prussia and on 22 April 1822, the poorhouse was placed under Prussian administration.

The location of the poorhouse was in the area of the Augustinerhof, a former monastery. It is the same area that currently accommodates the Rathaus of Trier and the city theater. The chapel of the poorhouse stood where today's city council chamber is located.

Administration of the Trier poorhouse lay with the Trier district government, and so the population of this district bore the cost of maintaining it. This meant that the inmates of the poorhouse came from the counties of Trier, Saarburg, Bernkastel, Wittlich, Bitburg, Prüm, Daun, Merzig, Saarlouis, Sankt Wendel, Ottweiler and Saarbrücken.

First Reorganization
From its founding until 1833, the poor, sick, insane, and criminals were all housed together "in the same pot." In the year 1833, the inmates were finally subdivided into these separate groups: (1) beggars admitted by court decision, (for whom work and an improved situation was sought), (2) felons in custody for thievery, (3) foundlings, abandoned children, and youngsters who had committed a criminal offense, and (4) the old, frail, work incapable and helpless poor. The curable sick without other means of medical care were placed in the hospital of the poorhouse and the insane were kept in the poorhouse's asylum.

The living conditions in the asylum became the scope of a court action against abuses in the year 1849. This court action was precipitated by an article entitled "the Mystery of the State Poorhouse of Trier," which appeared in the January and February 1849 issues of the Catholic "Volksboten" (Folk Messenger). It was a harsh indictment against the handling of the insane in the poorhouse and a strong outcry from the public resulted. Investigation by state officials confirmed the allegations in the newspaper article for the most part. For example, there were 600 insane inmates but only one cook kettle. This had the capacity to make food for a maximum of 450 persons. Clothing worn by the inmantes was dirty and dank; there was just one small bathing room for 600 people; and medicines were dispensed directly from the bottle, to name only a few of the infractions.

Second Reorganization
In 1850 a total reorganization of the Trier Poorhouse took place. There was a hospital for the work incapable and for the poor elderly; a cure and care institute for the blind and epileptic; an insane asylum; a work institute for vagrants and beggars, and an educational institute for poor orphans and young lawbreakers. Over the course of time, conditions in the poorhouse improved significantly until better economic stability in general and the formation of other types of care institutions made the poorhouse unnecessary. It closed January 1, 1919.