The Cargo Barge on the Saar 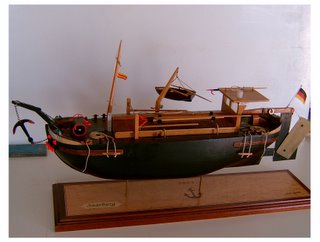 Model of the iron barge owned by a Saarburg family


In my August post called "Saar River Sailors and Their Helpers," I described the strong men who manned the cargo barges. But what about the barges themselves? These utilitarian vessels were one of the most effective means for transporting freight from place to place in Europe until the mid-1800's when the railroads began to take over the freight hauling market. Saarburg, only a few miles from the villages of my ancestors, was noted for its sailing families and its barge builders. As cargo, the Saarburg barges carried the Lohe (oak bark) that came from the neighboring forests for use by the tanneries; field crops grown by farmers; and wine that came from the hilly vineyards around Saarburg. Even coal, such as that which whas mined in the pit at Dudweiler was conveyed to Saarbrücken and loaded on barges for transport down the Saar and the Mosel.

There are many pictures of barges sailing the rivers and canals, such as the one above. But I had little understanding of the deck and the interior of a barge. I found some helpful information in the book by Nikolaus Ritzler,* but I had to struggle to understand the German, especially because the names that Ritzler used for many parts of the barge had not made their way into either my current or even my older German dictionaries.

So I did what I often do. I e-mailed Herr Ewald Meyer for help deciphering one of those frustrating words, "Hef." It was evidently a very important part of the barge, but I could not define it, much less form a picture of it.

To answer my question, Ewald and his son Arno went off to talk to a 70-year old man from Saarburg whose family had once owned a barge. Arno took pictures of a model of their barge "Patria" from several angles while Ewald asked questions about the Hef and other features of the boat. It is very true that one picture is worth a thousand words, but I think good pictures of a three-dimensional model of a barge are worth even more.

In his e-mail to me Ewald explained: "These photos are of a model of an iron barge. This ship belonged to the father of a 70-year-old man from Saarburg. His family sailed this ship between Saarbrücken and Basel (Switzerland) through the canals. On the bow of the ship was the anchor boom and on the stern of the ship the rudder boom. This ship could not be pulled by horses because it was too heavy. A tractor or an engine moved such iron barges. The barges made of wood were built in a similar way except for the pilot's cabin which would not be needed."

"The "Hef" is a space under the deck. Such a space would be located beneath the foredeck as a site for rope, spare parts, tar for patching, work tools and so forth. Under the small afterdeck there was living space with a cookstove, a benchbox and sleeping places (bunks with straw). The benchbox served as a place to sit as well as a storage place for plates, bowls, cutlery, etc. The floor of the Hef did not reach to the bottom of the barge. The space in the Hef was only high enough to accommodate an average man's height.  In this way, if water penetrated the barge's hull, there would be a good way and enough time to seal up the leak. The Hef was reached by steep steps or a ladder. The word `Hiaf´ comes from the word `heben´ (mosel-fränkisch `hiawen´)"

The following information is from the book by Nikolaus Ritzler. Doing a bit of educated guessing, I'm taking my best shot at some additional description: 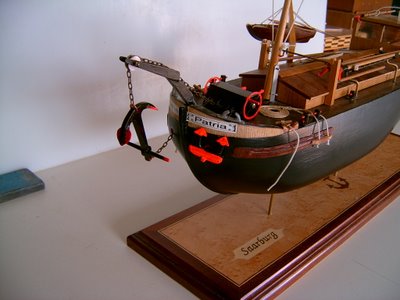 "The length of the newly built Saar barge was between 25 to 35 meters. It was 5 to 6 meters wide and its depth was about 3.5 meters. At the tip of the foredeck one would find a beech spar. The anchor which hung from the spar was held in place over the water by a strong chain that could be raised or lowered. On each side of this deck and also on the afterdeck there were 2 strong Rangen (sturdy posts?) that were 50 to 60 cm high. Looped with strong rope, these Rangen were used to moor the barge when it was in port. On the forward deck there was a covered entrance leading down to the space under the foredeck where the rope and other necessary work equipment were kept.

Between the forward- and afterdeck was the barge's Laderaum or hold. Here coal, wine barrels, crated goods, bales, sacks of fruit--whatever there was to be transported--was stored. The hold was fully covered by a roof; the floor made of pine boards. This kept everything well protected and water could easily be pumped out. The mast was attached to the hold. The slender mast could be lowered over the hold when the barge passed under bridges. 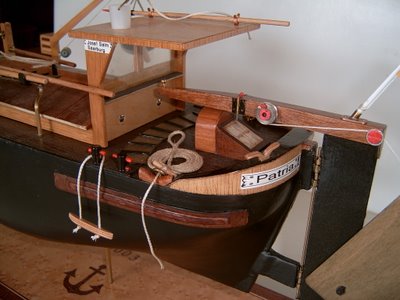 The heavy tiller wheel or Steuerruder was located at the tip of the afterdeck. Under the afterdeck lay the small space for cooking and sleeping" (described by Ewald Meyer in the section above).

*Nikolaus Ritzler grew up in Saarburg. In 1912, after he had retired he wrote Burg und Kreisstadt Saarburg.
Posted by Kathy, the Single-minded Offshoot at Saturday, February 18, 2006