On the Kitchen Shelves


Most of us with ancestors who come from the Trier area have probably thought, at one time or another, about the houses they lived in. But how many of us have considered the small items, used on a regular basis, that would be found in a cupboard or on shelves in those homes.

As I attempted to write the first chapter in my novel about my ancestors, I created a scene in which grandfather, father, mother, and children came to the table to have a meal - and discovered that I had very little idea about what would be on that table. What were the mugs and plates made from? What kind of food and drink would be in or on them? How had the meal been cooked and in what kind of pots? I had the genealogical and historical events that I needed to write about my immigrant ancestors' lives, but I certainly lacked data on the simple things.

Little by little I've found information in books and at museums about the small things, like dishware and crockery, that might have been used by a family in Irsch or Oberzerf. I've also been fortunate to have some additional help in answering that question. Ernst Mettlach, who grew up in the Trier area, was kind enough to send me photos and descriptions of some of the everyday objects that might grace the shelves of my ancestors' kitchen shelves or cupboards. His descriptions of the photos were so good that I'm using them just the way he explained them to me in his e-mail.

Ernst says, "Most of the pieces (which he photographed) are still in use and they all are typical for the region." 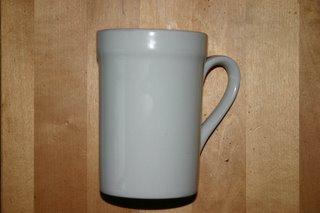 "My Viezporz is my porcelain-made mug where I drink my apple cider from. It is an old one, in use since my grandfather's days. As I no longer live in the Trier region, it is an excellent medicine against homesickness. For my grandfather, ca.1910, Viez (selfmade and cheap) was an everyday drink, like mineral water is for me. But on special occasions, like Christmas and on Sundays, he preferred wine."

"For real Viez, a special apple, called Viezapfel is needed. The species mostly used are called Roter Trierer and weisser Trierer, some use the Bohnapfel or Erbachhofer, a special pear is also added, the name is Sievenicher Viezbirne. And sometimes, the fruit of the Speierling (sorb or service tree) is added, which preserved the Viez and made it very clear. Every family had its own formula, how the fruits should be mixed. All these fruits are small, very old and very sour, at least not really edible. In former days, the grassland in the countryside was covered with apple trees of this species. Today, the trees are hindering industrial farming and they`re cut. For a time, the Viezapfel was on the list for endangered species."

"The Viezkrug is very old, maybe 100 years. It was closed with cork. With the bigger Viezkrug made from Steinzeug (stone-ware), the Viez was taken from the cask in the cellar and was prepared for drinking; that is, it was placed on or near the oven, to warm it up a bit."

"These two earthen brown containers made of clay are very old too. They were used for multiple storage purposes (flour, lard...) and you can heat them up."

"The grey containers were used for storage and especially the bigger ones were used for making sauerkraut, which, as every American know, was an everyday dish in past days. Therefore, the kraut or as we say in dialect, the Kappes, was cut in pieces with a Krauthobel and put together with salt in the container. The container was closed with a wooden plank and a heavy stone on it. Then the kraut fermented. I`ll never forget the terrible smell, when Grandma opened the container the first time. But the homemade kraut was delicious and very healthy. It is eaten with boiled potatoes and smoked pork chops." 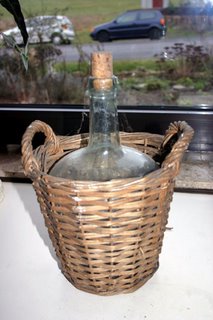 "The Bommes (dial.) or Korbflasche (German) was used for many purposes. During working in the fields, the Bommes was filled with Viez. It was a glass bottle coated with a meshwork made of willow branches."

"The wineglasses are different types: The green one is called Römer (Roman) and is still used in the region, especially along the Moselle River for drinking white wine. It is available in different sizes. The white glass is more exquisite, it is a so-called Treviris-Kristall-Glas. It was expensive and only used for special purposes like weddings etc."

"The wooden form was used to bring the self-made butter into shapes." "The mill is from the 40s or 50s and was used for grinding coffee."

"Big pots like these are made of cast iron. They were essential in every kitchen and still today after a hundred years or so, they're the best you can cook with. They become rusty if you don`t use them, so you have to oil them. I`m in posession of one and I love it. They're essential for cooking regional specialties like Schaales (a special, Jewish-inspired potato casserole with leek to be eaten with apple puree) or gedämpfd Krumpern (fried potatoes)."

Thank you, Ernst, for adding so much knowledge to my ancestors' kitchen shelves.
Posted by Kathy, the Single-minded Offshoot at Sunday, February 19, 2006