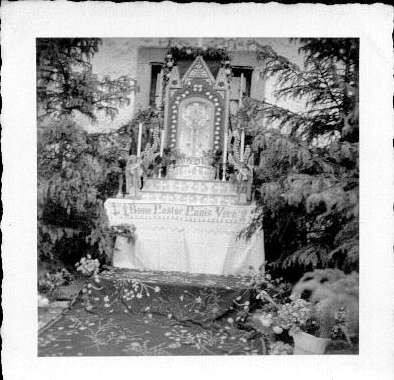 Traditional German Corpus Christi altar - photo from Ernst Mettlach who says he thinks the picture is from the 1950s.

In my Catholic parish in Wisconsin, the feast of the"Solemnity of the Body and Blood of Christ" will be observed on June 18. Most of us still think of this religious holiday as "Corpus Christi." It is not a Holy Day of Obligation in the United States, and it is now celebrated on the Sunday after Trinity Sunday.

However in many of the Federal States in Germany, including the Rheinland, Corpus Christi, known as Fronleichnam is still a solemn church holiday as well as a national holiday. It is celebrated on the Thursday following Trinity Sunday, a date that was chosen around the Thirteenth Century.

When he was growning up in Beurich (today part of the city of Saarburg) Ewald Meyer, author of a history of the village of Irsch, remembers Fronleichnam or Corpus Christi processions and the elaborate altars erected outside of the homes in his village, as illustrated by the photo above. As the Fronleichnam procession wound along the streets of the village, the village priest would bless each altar.

My German relative, Edeltrud Heiser, grew up in the village of Irsch. She says that when she was a child, the children in the Corpus Christi procession dressed in their best Sunday clothes. Little girls wore woven flower crowns of Ganseblumchen and Margarites and, if it was the year of their first Holy Communion, the girls would wear their white Communion dresses.

Ernst Mettlach also grew up in the Trier area. He is the fortunate owner of an elaborate Fronleichnam altar. He says, "I saved an old altar from the rubbish. It was decorated with flowers and placed at the feast of Corpus Christi (Fronleichnam in german) in front of the houses to honour Jesus Christ. There is still a procession today, but there are only a few house-altars left. Corpus Christi was an important day in the life of our ancestors."

As you can see from these four photos, the Corpus Christi altar that Ernst rescued is a wooden cabinet, rather like a triptych, that opens to reveal a painting of Christ and his apostles at the Last Supper. Intricate wood carving frames this picture, giving the whole piece the aura of an elaborate cathedral altar.

Some Additional Information about Corpus Christi

The feast of Corpus Christi was established in 1246 in Liege Belgium after Julianna of Mont Cornillon, a nun and mother superior who had always held the Holy Eucharist in great regard, reported a vision through which she understood that Jesus lamented the absence of a particular feast in the Church's calendar focused on his sacramental presence on the altar. When the former archdeacon of Liege, Jacques Pantaleon, became Pope Urban IV, he adopted the feast. It was (and in many countries like Germany still is) celebrated on the Thursday after Trinity Sunday. The Eucharistic procession, while not mentioned in the early office and texts of the Catholic Church, came to be connected with Corpus Christi and, in time, the hallmark of the religious observance. In addition to its religious significance, the feast also came to have great social and commercial significance. (Catholic Encyclopedia)

Fronleichnams-fest is celebrated throughout Catholic Germany with processions through streets that are charmingly decorated with flowers and garlands of green. Crucifixes and pictures of Christ are prominently displayed from window ledges and the steps of cottages and village fountains. In many places people display bright hangings and spread carpets before their houses in honor of the Sacrament and of the large crucifix, both of which are carried through the parish. One of the most beautiful features of the processions is the group of children, dressed in white with flower chaplets on their heads and nosegays of fragrant blossoms in their hands. Girls and women in magnificent regional costume add further distinction to the joyous event. http://www.sacred-texts.com

Cologne in 1279 had the first recorded Corpus Christi procession. Not content to adore the Eucharistic Christ exposed in a monstrance inside the church, the people appealed to have a Host consecrated during the Mass carried through the streets to be adored. The practice caught on throughout all of Europe, where it was seen as the triumph of Christ the King. In some places, the procession would wind through a town and even into the countryside. In Germany, each of the four Gospels was sung and Benediction of the Blessed Sacrament took place in four spots, north, south, east, west as a plea for good weather. (From the website Angel Fire)
Posted by Kathy, the Single-minded Offshoot at Thursday, June 01, 2006