A Family Story with Extras 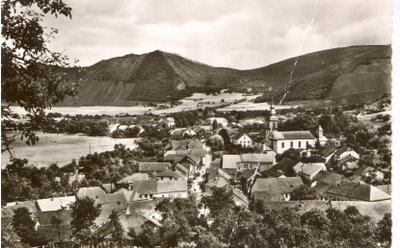 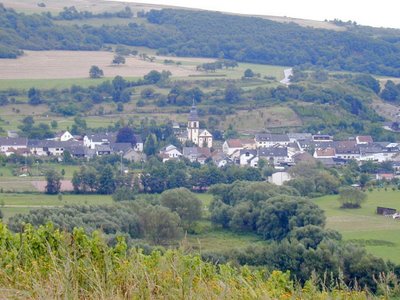 When I started “doing” genealogy, I kept my information on a form known to all genealogists – the family group sheet. While that works well for keeping track of names, dates and places, it is entirely unsatisfactory for all the pieces of information that breathe life into a family’s history. Eventually, I began to integrate historical information, especially social history, into a narrative for each family group.

While that prevented me from losing track of historical information, I soon realized that all of my ancestors from the Trier area shared a common history, leading to a lot of repetition in the text of each individual family’s story.

What to do? I invented what I call the combined family story with "extras." I put the information from the Rauls, Meier, Hauser, and Schawel family group sheets together, writing a single narrative that included all the brothers and sisters, parents, grandparents, etc., from all of my Rheinland families. Then I added what I considered relevant historical happenings. I also included social customs and any other tidbits of information that would get lost if I kept them on pieces of paper in my files. When I stumbled on a new piece of information of any kind, I just added it in. Here are some illustrations of my "extras."

A Picture of the Early Years

The first years of the nineteenth century were also the early years of my four great-great grandparents. While they were growing from babes to young adults, the other members of their families, the everyday world around them, and daily events both large and small, shaped them and formed the memories which they took to their new land when they emigrated.

Johann Meier, Magdalena Rauls, Michael Hauser, and Madgalena Schawel, did not come into the world at the best of times. These were bad harvest years, especially the mid-1820s when Johann Meier and Magadalena Rauls were born. The poorer people ate mostly bread made of potato flour. Some stole wood and poached in order to survive. The farmers with land fared a little better than the day laborers, but times were hard.

The residents of Irsch, Oberzerf, and Serrig had become citizens of Prussia after Napoleon’s defeat in 1814. There was no major war during the Prussian years from 1814 until the 1860's, and Irsch did not experience great changes of local governance under Prussian rule. For instance, Maximilian Keller served as Maire during the time that the Irsch villagers were French subjects. In 1814, Herr Keller kept his position as mayor. Only his title changed; he had become a Prussian Burgermeister. Unlike today, the term of office for a mayor could be lengthy. Nicolaus Bodem became the Burgermeister of Irsch in 1831 and kept this position for the next 48 years.

Even more respected than the civil authority of the mayor was the religious authority of the village priest. Like Mayor Bodem of Irsch, Fr. Matthias Guckeisen served the parish of Zerf, including Oberzerf and Greimerath, for an exceptionally long period of time, from 1824 to 1863 - almost 40 years. Father Peter Kremer was in charge of the Irsch congregation from 1817 to 1848, over 30 years. He might have served the parish longer but, like so many of his parishoners, he died during the cholera epidemic that was sweeping Europe at that time.

There is not much description available for the way that people lived their day-to-day lives in the villages of Irsch or Serrig. However, in neighboring Zerf where Magdalena Rauls grew up and which was only a few miles away from Irsch, the living conditions in the 1800's were well described by Edgar Christoffel in his history of Zerf. 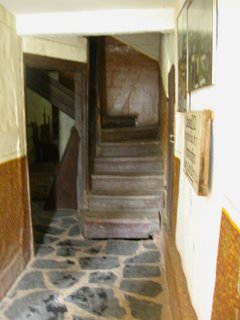 "Most houses were damp...because they had only partial cellars. They were built of quarry stone, one or two stories tall, and had straw roofs. Only the public buildings, such as the mayor's house, the school, and the church had sloping tile roofs. Inside, the house was very simply furnished and rooms other than the kitchen and the 'good room' were seldom heated...[There was] an open fireplace where a large log burned. On an iron pole hung the big kettle. Meat was smoked in the open chimney..."

"Meat could only be kept by smoking it; when meat was eaten during the day, it was smoked and served with sauerkraut. The poorer people seldom had meat on the table. They had buckwheat dumplings with milk. More well off people might have bacon as well. In the evenings fried potatoes with sour milk were frequently eaten."

"In the winter evenings, the women busied themselves spinning flax, hemp, and wool. The men smoked their clay pipes...”The village streets had a slightly convex, bumpy surface, so that the horses often slipped off the road. In the dark, the men of the village sometimes did the same. Since the streets had no drainage, the water flowed in the gutters when it rained; and since the gutters lay right in front of the houses, the people had to make a huge jump to get across them or lay a plank over them. The waste water and sewage was dumped too...and there was a very unpleasant odor on some streets in the summer. Toilets were little houses with a small cut-out heart on the door. They stood near the manure pile or cesspool. Water came from village wells, although a few people had wells of their own."

Sicknesses such as typhus and scarlet fever were prevalent during the 1830's, and many children and adults died from these diseases as well as from diphtheria. I noted that two of Johann’s Meier's brothers died in those years; both were under four years of age.

The children of Irsch received their education in the schoolhouse on the Irsch/Biest border. Infant mortality decreased during the first half of the 19th century and there were so many children enrolled in the school, newly built in 1828, that by 1833 there were two teachers. The principal subjects taught were writing, arithmetic, and Bible instructions. 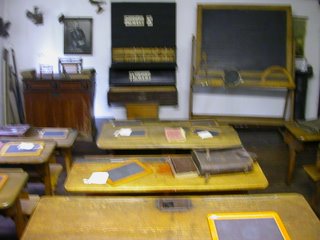 Zerf too needed another teacher. The school population was as high as 100 students in 1826 and eventually there was a separation of the school children into a lower form and an upper form.

Irsch suffered a terrible tragedy in the dry summer of 1842. The biggest fire in 100 years destroyed 34 houses and 22 stables within a few hours, leaving 500 inhabitants without shelter. The stables, which contained fodder for the animals and the oak bark meant to be sold to the tanneries of Saarburg, were also reduced to ashes.

In 1844, the "Holy Robe" of Christ was displayed in the Cathedral in Trier. The robe, thought to be the seamless garment which Christ wore on the day of his crucifixion, supposedly was given to the Bishop of Trier by the Mother of the Emperor Constantine. It was displayed only periodically, and it brought a great number of pilgrims through the Saar villages as they made their way to Trier Dom Cathedral to venerate the the Holy Robe.

Irsch was approximately two miles from Saarburg, the seat of government for the Kreis. But its accessibility was limited because the Saar River separated it from all the small villages to its east. Since the stone bridge across the Saar was not completed until 1861, anyone coming from Irsch would have to be ferried across the river in order to get to Saarburg.

Some Questions
Did 17-year old Johann Meier see the family's possessions go up in flames; was Magdalena Rauls, born on December 25, baptized by Father Guckeisen in the chapel at Oberzerf while the boughs of fir trees still decorated the church altar; was Magdalena Schawel, on her first day of school, excited because she was among the first group of children to be taught in the new school building? I do not know the answers to those questions, but without the "extras" in my family story, I would never have had cause to wonder.