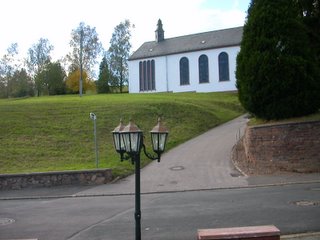 
The Hunsrück mountain range is east of the Mosel and Saar rivers. These mountains, though not nearly as high as the Alpine ranges of Germany, do have elevations that are over 700 meters (about 2,300 feet high). There are many small villages in the Hunsrück; Oberzerf, my great-great grandmother's birthplace, lies in a valley at "the foot of the Hunsrück." (Der Hochwaldort Zerf am Fusse des Hunsrücks by Edgar Christoffel, Verlage W. Rassier, Saarburg 1981).

If you've read, "Weddings, Normandy Style," my previous post, you will notice both differences from and similarities to the Hunsrück country wedding which I am about to describe. I found these customs in the book, Die Hunsrücker Küche, Rezepte und Bräuche meiner Heimat, (The Hunsrück Kitchen, Recipes and Customs of my Native Land) self published by Christiane Becker in 1998.

Until the turn of the century, the rural suitor and the wedding agent were an essential part of the courtship process in the Hunsrück area. When a country lad was ready to marry, he would take along with him a sort of godfather to help him when in his courtship of a prospective bride. So when two men wearing white silk scarves appeared in a village on a Sunday, everyone knew why they had come. They would first unobtrusively scout the house and the outer buildings of the prospective bride's family. Only then would the talking get under way. If the suitor had good luck with his proposal, he and his "godfather", in accordance with custom would be invited to eat fried eggs and Schinkenspeck (fatty ham?). However if bread and cheese with Schnaps was offered, then both men knew that the suitor had been rejected.

Once the wedding offer had been accepted, the old custom of Hillich was sometimes celebrated. The "Freiersmann" or wedding agent would give the young couple a speech about the importance of the vows they were about to take. The bridegroom to be would then place a coin in the hand of his future bride which was called, not surprisingly, "Handgeld," that is, hand money. There followed a Hillich feast. In the 17th century, this meal became so sumptuous that the Catholic church took action against it. So in later times the Hillich meal was much more modest. Bread, butter, cheese, wine and beer were served.

On the three Sundays before the wedding, the couple's upcoming nuptials were "called" during the church service. It was an announcement to everyone in the congregation and probably also a protection for the young woman, making sure that her prospective husband was free to marry. Notices announcing the wedding had been nailed to the doors of the community bakehouse and the village hall. All of the relatives and neighbors had to be invited. So a "Hochzeitsbitter," was employed to invite wedding guests. He usually dressed in the kind of clothes one would wear for a feast. His hat was decorated with laurel and rosemary and he carried a brandy jug. After he spoke a wedding invitation, he poured out a small glass of brandy and offered it. He would receive a slice of bread in return.

On the wedding day, the Hochzeitsbitter received the guests at a breakfast of bread and brandy in the wedding house. The bridal couple would then leave for the civil ceremony at the registry office (probably in the town hall) which was required by law and preceded the wedding at the church. Often some kind of obstacle would be placed in the way of the wedding procession, perhaps a chain, a pole, or a ladder. This obstruction could only be bypassed by the payment of a ransom. As a reward for the payment of this "Trinkgeld," (literally "drink money), the men fired their guns, making a loud racket. This noise was meant to drive away the angry spirits which were said to be especially dangerous during happy times. In earlier times, fiddlers accompanied the bridal couple on the way to the church. As they walked along, the bridal couple delighted the youngsters by throwing small coins.

After the wedding, it was time for food. Although the people of the Hunsrück ate very plain food most of the time, a wedding feast was an exception. A cow or a pig was usually slaughtered for the wedding meal. In earlier times, each guest made a contribution to the cost. For the noon meal there might be a beef soup with egg and noodles, pork which was either cooked or roasted, beef with horseradish, bratwurst sausages, sauerkraut or white beans. As the author of the little book of recipes and customs says, "It was a plentiful table."
Posted by Kathy, the Single-minded Offshoot at Thursday, October 27, 2005