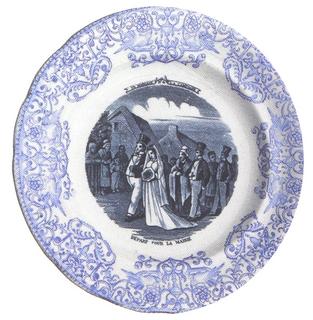 A decorative plate depicting a
scene from a wedding in
Normandy

What would courtship and a marriage ceremony held in 1849 Germany be like? That has been an nagging question for me in writing the story of my immigrant ancestors, Johann and Magdalena Meier.

Until 2004, none of the books or genealogical magazines I had read described a wedding in the Mosel/Saar area or any other area of Germany, despite the fact that it was a very important life event. By 2003 I was ready to go a bit afield. On a river cruise that followed the same route that Johann and Magdalena traveled to reach the port of Le Havre on their way to America, we docked at a village called Vernon. There, in a small bookstore, I found a book about Normandy in the 1890's. It contained a very long description (in French) of the marriage traditions and customs in Normandy's rural areas. Reasoning that parts of France and the Trier/Mosel region of Germany might have a number of similarities, I bought the book, and with the help of a friend who had studied French in college, I wrote down the courtship and wedding rituals.

In rural Normandy, courtship must proceed slowly, especially among country folk. Occasional sharing of a few words after church, an offer to help with a chore such as carrying a basket or bucket, then an evening at the party on the feast of the parish's patron saint or a strolling walk, until the day the suitor is ready to declare himself.

An older person acts as the matchmaker. If permission to marry is given, the engagement is announced. It is made official when the young man & members of his family are invited to a fine dinner at the home of the bride-to-be. It is also the occasion of the first gifts.

Weddings were usually on Tuesday or Saturday. On the wedding day, the bride's crown is fitted with a small mirror set in a bezel and tied to the back of the wedding crown or headdress with a green silk cord. This is a symbol of virginity. After the marriage, it is removed and tied to the head of the bed.

While the groom dresses in a simple somber attire, guests are allowed to come to have something to eat and drink as they offer their presents. After the bride is dressed, the dressmaker attaches a cluster of orange blossoms to the lapel of the groom's jacket. Now the wedding procession is about to begin.

According to the distance to the mayor's office and to the church, the bride and groom either walk or go by horse-drawn carriage. Two violins go before, playing something "harmonious"; the bride on the arm of her father or in some places, the groomsman. The remainder of the guests walk behind. The civil ceremony at the mayor's office is short, the church ceremony being more important.

The bells ring out as the procession approaches the church. The husband places the ring on the finger of the bride. If the groom cannot get the ring easily over the knuckle, and the bride must finish it, it is then said that she will wear the pants in the family. After the ceremony, the newly married couple go to the sacristy to give a gift to the priest. Then they leave the church to the ringing of the bells. Sometimes sugared almonds or rice are thrown.

A painting by the artist Pierre Outin from the Musee des Arts et de l'Enfance in Fecamp which was used to illustrate the chapter also caught my attention. The costume of the bride and groom would indicate that the time period represented was the late 1700's. In the painting, the wedding party leaves the church and walks to the nearby cemetery where the bride places flowers on the grave of a loved one, probably her mother, as her new husband looks on. Standing back a bit from the couple is a gray-haired , sad-looking man, probably the bride's father.

The bridal procession reforms outside the church in order to walk to the home of the bridal couple, but usually the group is no longer solemn. There is joking, singing, even dancing. In families that are particularly well off, the people who have arrived at the home of the bride and groom go to the wardrobe to admire the trousseau, in which great pride is taken.

Some people who joined the procession that went to the church do not rejoin it after the ceremony. Instead they go to the public house to sing, dance and eat.

Now there is a wedding meal. The table is covered, usually with a white cloth and decorated with fresh flowers. At some time either during or right after this meal, the bride sings a song of thanks to her parents and confirms her separation from them. Then she sings to her husband and inlaws. The groom sings to his parents and also to his inlaws. A relative or parent of the groom sings to the bride. Sometimes others sing as well. After the songs, everyone dances until dawn.

On the first Sunday after the wedding, the priest welcomes the couple before mass and gives them their new place in the church.

(The preceding information is taken from the book, Il y a un siecle...la Normandie: La vie quotidienne des Normanands, by Hippolyte Gancel)
Want to Know More?
Since 2003, I have found descriptions of a Hunsrück village wedding as well as one of a rural wedding in Bavaria. Many elements of the three are so similar that I've decided to post them too and to draw upon them when I describe the February 14, 1849 wedding of my great-great grandparents that took place in the village church of Irsch, Saarburg, Rheinland. Look for Weddings, Hunsrück Style in my next posting.
Posted by Kathy, the Single-minded Offshoot at Monday, October 03, 2005