Christmas in the Kitchen 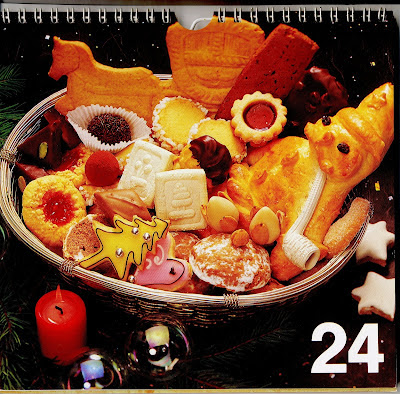 Savoring the aroma of Christmas baking and the Christmas dinner roasting - it is a part of Christmas for most of us. So it was for our ancestors in the Rheinland.

The "Adventskalender Lufthansa", published in 1986, was a Christmas gift from my aunt who loved the idea of German ancestor searching as much as I do. There is one glorious picture of Christmas cookies or candy for each day of December. On the reverse side of the picture, there are two recipes, one in German and one in English, for making traditional Christmas delicacies from many parts of Germany.

The introduction reads: "Everywhere in Germany, home baking is as much a part of the Christmas festival as are the brightly decorated Christmas tree and Father Christmas with his gifts for the children. Christmas baking reaches its high point when the children receive their gifts on the evening of 24 December. When the Christmas tree is brilliantly illuminated, the presents on the traditional table of gifts will include a colorful 'bunter Teller', a plate overflowing with all the fragrant cookies and cakes that have been baked in the weeks preceding the festive season." As you can see in the picture above, there is a large "24" on the last page of the calendar and a "colorful plate" of mouth-watering Christmas delights.

Whether in 1986 or 1868, Advent is/was the time for Christmas preparation. On an evening when the skies shimmered red in the Hunsrück, the children were told that "they are baking cookies (Plätzchen) in heaven." This baking was not to be done alone. God's children, especially the young ones, must help. Usually it was the grandmother who got the children busy, rolling out dough and shaping the Plätzchen for the oven. The children were happy as they worked because they knew that when the cookies came out of the oven, there would be a chance to sample. But the cookies were soon put in tins because they were to be eaten on Christmas eve and Christmas day.

There were many kinds of cookies baked in the Hunsrück. Most used simple ingredients that a farm family could produce through their own labor. Weihnachtsgebäck was a Christmas sugar cookie, very similar to the kind still made today. The dough was rolled thin and a glass, usually a wine glass, was used to cut out the cookie. It was pierced with a fork or needle to make a decorative pattern, then egg yolk was spread on it so that the cookie would bake golden brown. In a tightly closed can, these cookies would keep for a long time. Another was called a Honigküchlein, a little honey cookie that used sugar, flour, honey, eggs, and egg yolk. The flavor could be varied by using cinnamon or clove or ginger. By the end of November, the baking of Lebkuchen had begun. Nussküchlein or little nut cookies used butter, sugar, egg, hazelnuts, cinnamon, and flour. After the dough was mixed, it was cooled so that it could be shaped like very little Brotchen (rolls), spread with egg yolk and baked on a well-oiled pan. 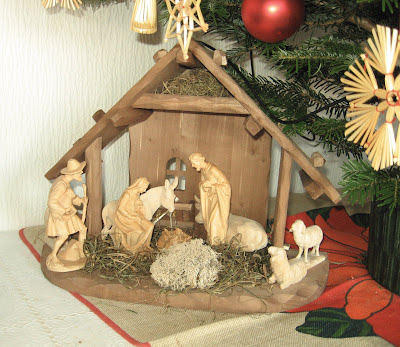 In early times, the Christmas tree was decorated with the baked sugar cookies and with apples, nuts or straw handmade ornaments. In the Hunsrück, as well as many other parts of Germany, it was thought that on the holy eve of Christmas the animals in their stalls could talk with each other. It was a custom for farmers in the Hunsrück to put hay, rye, wheat, oats, barley, bread and water in front of the house door. They believed that if the water and fodder was given to the animals on Christmas morning, and if the bread was eaten dry by the farm family, sickness would be kept away for the rest of the year. 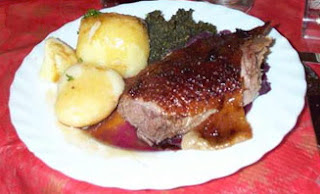 The traditional Christmas dinner for the Hunsrück farm family was a stuffed goose raised on the farm. The stuffing for the goose was made with butter, eggs, onion, wormwood, nutmeg, as well as the heart, liver, and stomach of the goose, apples and potatoes or shelled boiled chestnuts. After all the ingredients were chopped and mixed, the goose had to be washed. The feathers and fine little hairs were singed off. It was salted well inside and out and the filling was put in a hole in the stomach. When this hole was sewed shut with strong string, the goose was placed in a big iron pan. First it was laid on its breast for an hour of roasting and then the fat was drained and the goose was turned and roasted for another half hour. It was basted with water or beer a few minutes before the goose was removed from the oven to give it a good crust. A sauce or gravy, thickened with flour, was made from the drippings (the beer gave added extra color).

The kitchen was the heart of the 19th century home at most times, but especially during Advent and on Christmas Day.