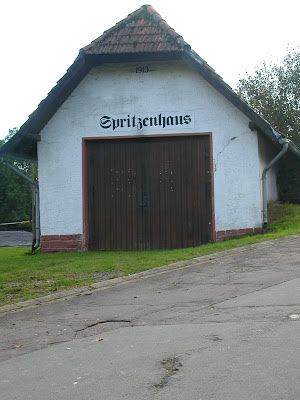 
During this snowy winter, I resolved to clean up my office. While the effort was only partially successful, I did find a lot of interesting material I had completely forgotten about. One especially valuable find was of some photocopied pages from a book by Edgar Cristofel, "The History of the Landkreises of Trier-Saarburg from the beginning until the present (Die Geschichte des Landkreises Trier-Saarburg von den Anfängen bis zur Gegenwart 1815-1992). Herr Cristofel's research into the history of the region was extensive, and I will probably quote his work again in the future. This time what drew my attention was the attempt of the Prussian government to try to avoid one of the most feared disasters of the time - fire.

In past posts I have described the typical Trier/Saarburg Einhaus in which the house and barn were brought together under one roof. These dwellings belonged to land-owning farmers of at least moderate means. But not every resident of a village in Kreis Trier or Saarburg had such dwellings, especially not in the period between the fall of Napoleon in 1814 and the mid-point of the century, when poverty was widespread. 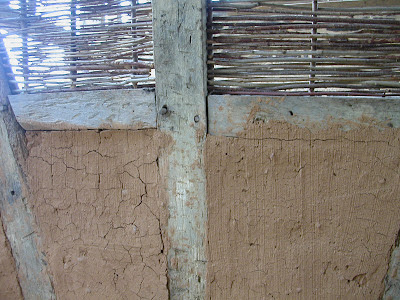 Historic reconstruction of a wall at Rosheiderhof Open-Air Museum


In his book Herr Christofel says that in the early part of the 19th century, many of the houses in a rural village were only one story high and rather small. Such villagers were day workers who did not own land. Instead they worked for the landed farmers as field hands. There were also struggling craftsmen like the broom binders and basket weavers. All of these families lived in very small houses with roofs of straw or thatch. Wood beam construction was used and the walls of the houses were constructed from clay, stone, or sometimes a combination of both. Straw or thatched roofs were the rule, except for the roof of the mayor's house and the roof of the church. Slate or tile might be used on the roof of the schoolhouse but not always. Even most of the farm dwellings still had straw roofs.

The wooden beam construction of the houses, the roofs of straw or thatch, and the crops of hay and straw stored under the one roof that served as both house and barn made for a tinderbox environment in all of the villages of the region. In the year 1822 in the little village of Kenn in Kreis Trier there was a fire that destroyed 122 houses, stables, and other out buildings.

When a fires broke out, a householder would seek help from his neighbors to fight the fire. They used the only method they had to put out the blaze. A bucket brigade would be formed; and if the fire was controlled, the embers were raked apart and stamped out. Little by little villages built up a crew that could be called out for a fire.

Aware of the constant threat of fires burning out of control, in 1824 the Prussian Government decreed that any house built after that time could not be roofed with straw or thatch. One can assume that many the emperor's subjects violated this rule because of the poverty of the times.

In June 1837, a new rule was promulgated by the Prussian government. It was called the "General Rule for Halting Fire Danger". It applied to any place in a city or village where houses stood together and had several requirements.

Roofs: A straw- moss- or wood-type roof was not allowed when the house was less than 2,000 Prussian feet from the other buildings in the village. Where houses stood together, any new roof had to be constructed of slate, metal, or clay. Permission or an exception was only made when the property owner lacked the means to be able to replace a straw or wooden shingle roof with a slate- or clay-type shingle.

Permission to cover a roof with straw, wood, or any other flamable material could only be granted by the Landrat, the head administrator in each Prussian district. Anybody who ignored the regulation and reroofed a dwelling with straw without this permission was fined a penalty of 1-5 Prussian Taler. In the case of a new building constructed with a straw roof and without permission, the violator was "punished." Herr Cristofel did not explain what the punishment might be.

Lanterns: Each house had to have a closed lantern, and only with this kind of lantern was one allowed to walk on wooden floors, in the stalls and stables of the barn or any other places where there was a danger of fire. The lantern had to be available for inspection in each household.

Fire-fighting: In each city or large village, a Brandcorps (fire corps) had to be formed. Residents from the community were chosen by vote of the governing council of the city or village and approved by the Burgermeister. Once the Brandcorps was formed, they voted on which of them would be the fire chief. Some community members were not permitted to be part of the fire corps. People over 60, under 15, priests and religious, teachers, sick and infirm, government officials, and doctors were excluded. The fire corps had to meet twice a year under the guidance of the mayor or his representative in order to practice using their firefighting equipment.

When a fire broke out in the community, the inhabitants were made aware by whatever means possible; the ringing of a bell, a village drummer or the cries and alarms of the night watchman.

In spite of the fire laws and regulations, a good many of the houses in the rural villages were still covered by straw roofs until the last 20 years of the century. The volunteer fire companies with fire-fighting equipment also came into being about that time.

Posted by Kathy, the Single-minded Offshoot at Thursday, March 06, 2008