Bypassed by a Railroad 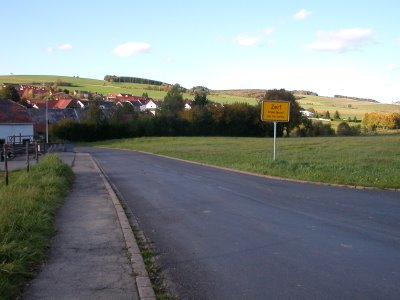 Approaching the village of Zerf - by car>>

For some of the farmers and craftsmen who lived in the Hunsruck area of the Rheinland, the building of the railroads influenced their decision to emigrate - but not always by making it easier and cheaper for them to reach an ocean port. The building of a railroad line through a remote area might give a man a hope for a brighter future, causing him to remain on his land. When his hope for a railroad line near his village was dashed, might it not cause that same man to pack up his family and try for a better life in America. The railroad line from Luxembourg to Saarbrucken is a case in point.

Villages like Irsch and Serrig had convenient access to the Saarburg-based cargo barges that sailed between Trier and Saarbrucken. The farmers in Zerf and the villages that surrounded it had much greater difficulty getting their products to appropriate markets than the people who lived nearer to the Saar River.

Then came a ray of hope. In 1844, the local city government in Trier began an active campaign to bring a railroad from Trier to Saarbrucken, fearing that the plan of running the railroad from Luxembourg City to Saarbrucken over Merzig and Remich would bypass Trier and affect the city negatively. They found an English company that was interested in a Trier-Saarbrucken railroad project. Two possible paths were debated. One was to follow the Saar valley; but the other was to go over the Hochwald through the Ollweg valley, with a tunnel from Franzenheim to the Ruwer valley, overland through Zerf, then leave the Ruwer valley and head toward Losheim. From there it would go to Illingen and end in Neunkirchen which would connect the line to Saarbrucken through the already existing Bexbach-Mannheimer railroad.

But unrest was in the air, leading up to the revolution of 1848. The foreign companies lost interest in building a railroad from Trier to Saarbrucken, so the city of Trier lobbied its cause directly in Berlin. Finally Berlin gave way to pressure from the Trier delegates, agreeing that running the rail line through Trier was a military necessity. The city was to be included in the railroad line stretching from Luxembourg to Saarbrucken. But which of the two routes originally considered by the British investors in 1844 would be the one chosen - the one running through the Saar valley or the high overland route through Zerf?

A committee of representatives from the Hochwald defended the route that would let the railroad pass over the Hochwald and through the Bliestal and the villages of Zerf, Losheim, St. Wendel and Ottweiler. They argued against placing the railroad line in the Saar valley because of its nearness to France, the higher land costs and the fact, that "all the Saar sailors, whose number are not small, would be cut off from a source of income." The Hochwald, on the other hand, needed a favorable route for its goods - wood, Lohe (tanning bark), and cattle - so that the population did not become even more impoverished. However, the petition of the Hochwald committee was rejected by Berlin, and the Saar valley gained the advantage for the railroad line. The representatives of the Saar valley industries had prevailed over the weakly structured Hochwald/Bliestal region’s committee, probably helped by the fact that the manufacturer Boch, owner of the porcelain factory at Mettlach, had never favored the Hochwald plan.

On 7 March 1857, Emperor Friedrich Wilhelm IV decreed the construction of the railroad line using the Saar Valley route. Zerf and the other Hochwald villages had lost their chance for prosperity.

The choice of the Saar route was not without problems. Terrain difficulty, especially in Mettlach, increased the total cost of of the project from five-and-a-half million Taler to eight million Taler and delayed the completion until 1860.

Mathias Rauls, the brother of my great-great grandmother, was one of the emigrants who left the Hochwald in 1857. He and his wife Elizabeth, along with 38 other residents of Zerf, received permission to emigrate during the months of February, March and April of 1857. I believe that these farmers and their families had already guessed that there would be no railroad line for Zerf and that most of the farmers in the Hochwald area of the Hunsruck would struggle with poverty for a long time to come.

The Rauls family settled on eighty acres of land in the Township of Berry, Dane County, Wisconsin. The plat map of 1864 shows a railroad line near their farm.