A Time to be Thankful


There is always more to learn and to share with you.  I haven't done much of that during this past year. The reason my blog has been so inactive was my resolution to finish the book I am writing in 2016.  The end of 2016 is approaching quickly.  But there will not be any information about that until my December blog post.

Because of the holiday we celebrated today, Thanksgiving, I want to show a similar German custom that I had observed in Irsch and participated in when I rented an apartment in Saarburg.  I never thought there might be a historic explanation of either.  The German customs I took no notice of are a part of a celebration called Erntedankfest.

I would never have known there was more to the picture above if I had not read an article from the very useful "German Language Blog."  So I am thankful that "Erntedankfest German Thanksgiving" enlightened me to the historical aspects. The following comes directly from that blog post:

"First, the breakdown of the word. ‘Ernte’ means harvest, while ‘Dank’ comes from ‘Danke’, meaning thank you, and ‘Fest’ is German for festival or celebration. The word Erntedankfest therefore translates to ‘Harvest thank festival’. So Erntedankfest is a harvest festival where you express thanks for the food you have received throughout the year!"
"If you live in the USA, this will sound very similar to Thanksgiving. In the USA, Thanksgiving has become a secular holiday centred around food and family get-togethers – but in Germany it is still a rather religious occasion, centred around church services and giving thanks for the land-grown vegetation – the maize, corn, fruit and vegetables – that have fed everyone for another year."
"Erntedankfest is usually celebrated on the first Sunday in October, though this date can vary from region to region." 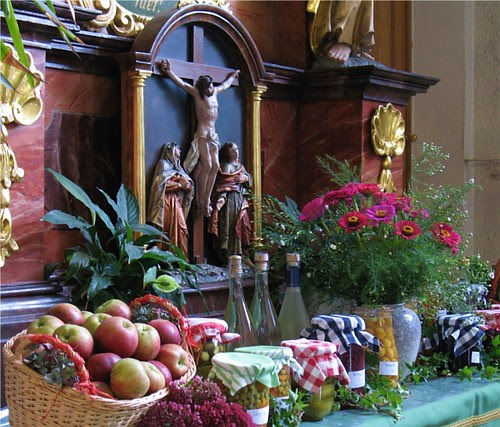 Photo by jeurgen-tesch on flickr.com
"Typically, the day includes a church service, a procession, the presenting of an Erntekrone (harvest crown), then food, drink and music, and an evening torchlight procession through the town. Church altars are decorated with wreaths, flowers and fruit, and Blasmusik (music played with brass/wind instruments) is played at these services and during the processions."


"Some towns and cities hold farmers’ markets selling fresh produce, and bring along their tractors or horses for the local people to see. It is basically a celebration of the land and of all things agricultural! There are also often lots of activities for kids at these Erntedankfest celebrations, so they are well worth getting involved with if you happen to be in Germany around late September/early October."
When I attended the "Golden Autumn" in Saarburg in 2010, and when I saw the mosaic made of vegetable materials in the church at Irsch, that was a piece of Germany's traditional Thanksiving, not just a an autumn entertainment or an interesting mosaic.  It was a traditional way of giving thanks to God for the bounty of the earth.
Posted by Kathy, the Single-minded Offshoot at Thursday, November 24, 2016