A Visit To The Zerf Heimat Museum 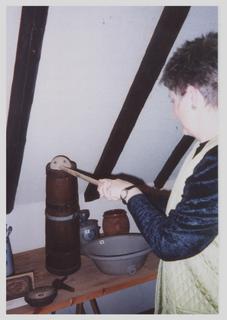 
In 2002 I planned a trip to the Saarburg area to try to learn more about the lives of my ancestors. I learned that the little village of Zerf, where my great-great grandmother had been born in 1827, had a Heimat Museum, a place where the everyday house and farm tools of the 19th and early 20th century could be seen.

I wrote to the museum to learn more about the open hours but never received a reply. Shortly before my trip, I decided to contact the mayor of the village to find out if there was any way that I could inside the museum. (It sounded so perfect for the kinds of information I needed that the thought that I might not be able to see it was making me crazy). In my letter, I gave my e-mail address as well as my home address and offered to pay for any costs involved.
Almost immediately I received a reply from Edith Rommelfanger, the mayor's wife. She said that when I arrived in the area, I should call, and they would arrange to show me the museum. From then on, the fates stepped in and made my visit to the museum as easy as finding a cheesehead in Green Bay.

Once I arrived in Saarburg, the call for an appointment to see the museum was made not by me but by Ewald Meyer, a retired teacher who was writing a history of another of my ancestral villages, Irsch bei Beurig. Herr Meyer took me "under his wing" and became my charming guide and chauffeur during my visit to Germany.

When all the arrangements were made, Herr Meyer and I drove to Zerf and were met by the mayor, Manfred Rommelfanger and his wife who gave me a two-hour tour of the museum, which is only open by special appointment.

As a souvenir, I was given several sheets of information on the exhibits. I believe Frau Rommelfanger herself wrote them, and she asked if I would translate the pages, which explained the majority of the exhibits, into English so that, should another American arrive, an English text would be available. She understood that my German is mostly self-taught and that mistakes were possible. She did not seem to mind. So when I came home I did my best at a translation and sent it to her.

I have decided to share some of this information in my blog from time to time, hoping that I have made only small errors in translation and that you will enjoy reading about some of the artifacts and how they were used. I will include a picture if I have one available. The quotation marks will indicate which information is translated from my Heimat Museum guide. Information that I added to help myself understand is in parentheses.

Heimat Museum Zerf
"This exhibit is about butter production. The first step was the Milchentrahmung or milk separation. A milk bowl served that function. It had a plug and a little sieve or filter. After approximately 12 hours the plug was removed, skim milk flowed off; and the lighter cream that had collected above was held back by the filter. The successor of the milk bowl was the centrifuge. There was a small bell on this centrifuge. As long as it made a sound, the cock had to remain closed, because the rotating speed was not yet fast enough. As soon as the little bell stopped, one untwisted the cock, and the centrifuge began the separation. The cream came out in front and the skim milk in the back."

"For honey production in former times a bee shed could be made in a very simple way. One pushed four stakes into the ground, placed a slanted roof covered with Ginster (broom) on top; and put the (woven) straw hives underneath." (Broom grows wild all over temperate Europe to a height of 3 to 5 feet. It produces numerous long, straight, slender bright green branches, tough and very flexible. The bright yellow fragrant flowers are large, in bloom from April to July, and are succeeded by oblong, flattened pods, about 1 1/2 inch long. The pods are nearly black when mature. They burst with a sharp noise when the seeds are ripe, flinging them some distance. The continuous crackling of the bursting seed pods on a hot, sunny July day is quite noticeable. The flowers have a great attraction for bees; they contain no honey, but an abundance of pollen).
Posted by Kathy, the Single-minded Offshoot at Friday, July 29, 2005