The Magi and More

I grew up in a small (350 population) German-American community where the Christmas traditions were very similar to those which still exist in many parts of Germany today. No one put up a Christmas tree until Christmas Eve day. Santa Claus made his visit to our farm in the early evening of December 24. That's when Christmas began and it lasted at least until Three Kings Day, when we moved the kings from their distant location in the manger scene to the very stable where the baby Jesus lay. I still find it difficult to accept the current practice of putting up a Christmas tree the day after Thanksgiving and taking it down on December 26.

With the feast of the Epiphany/Three Kings Day approaching, it seemed a good time to write about the German celebration of the coming of the Magi and also some of the other lesser know customs which led up to the celebration of Christmas in our German ancestors' pasts.

The Feast of the Magi
The Greek word "Epiphanias" means "uprise, appearance", i.e. appearance of the Lord. Epiphany is celebrated on January 6 and is better know as the feast of the Three Kings, the "Wise Men," or the Magi. According to an old legend based on a Bible story, the three kings or Magi saw, on the night when Christ was born, a bright star and followed it to Bethlehem. There they found the Christ child and presented him with gifts of gold, frankincense and myrrh.

As the centuries went on, customs grew up around the feast of Epiphany. In many places in Germany, including the Rheinland, the doorways were sprinkled with holy water and the initials of the Three Kings -- C+M+B (Caspar, Melchior, and Balthasar) -- plus the year were inscribed in chalk over doorways on the eve of January 5 or 6 to protect house and home. According to scholarly thought, the three letters really come from the Latin phrase for "Christ bless this house" -- "Christus mansionem benedicat."

In many places in Germany, on the afternoon of January 5, the local priest still blesses incense and chalk for use by the Sternsänger (star singers), three children selected to dress up as the kings. 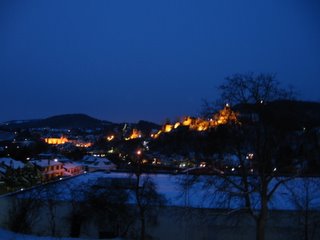 When the stars come out, the children go from house to house, chalking the initials KMB and the year at the entrance of each home. These initials signify that Kaspar, Melchior and Balthasar have passed each house as they follow the guiding star on the way to Bethlehem. The children also parade through each house, wafting incense to scare off evil spirits. That night a special dessert is served, Dreikönigskuchen, or Three Kings' Cake, a very elaborate fruit cake.

The German celebration of Christmas, unlike our own American Christmas celebration, has a definite beginning and ending. January 6, the last day of Christmas, comes with its own traditions, rituals and symbols. Carolers are going from house to house; in many homes the Christmas tree is taken down and in some areas it is burnt in a big bonfire. For the children this is an especially joyous occasion because, associated with taking down the tree goes the "plündern" (raiding) of the tree. The sweets, chocolate ornaments wrapped in foil or cookies, which have replaced the sugar plums, are the raiders' rewards.

Saint Barbara's Day
Barbara, the daughter of the rich merchant Dioscuros, grew up in Nikomedia (today's Izmet, Turkey). In order to retain her innocence, Barbara's father locked her up during his absence, in a tower with only two windows. When Dioscuros returned from his journey, he found a third window in the tower. Barbara had been baptized by a priest disguised as a physician, and she ordered the third window as a symbol of the Holy Trinity.

As this was done against her father's will, Barbara was accused, tortured and condemned to death. A branch of a cherry tree had gotten caught in her dress when she was locked in a dungeon. Barbara watered it with the water from her drinking cup, and on the day of her execution in the winter of 306, the branch bloomed. From this comes the "Barbarazweig," the custom of bringing branches into the house on December 4 to bloom on Christmas. In some areas St. Barbara's Day is also the day to bake Kletzenbrot, a loaf cake made with prunes, dried pears, raisins and currants. Kletzenbrot is most commonly made in Austria and Bavaria.

Saint Andreas Day
November 30 is dedicated in the evangelical, catholic and orthodox churches to Saint Andreas (St Andrew), the brother of Saint Peter and one of twelve Apostles. His feast day is November 30, traditionally considered the date of his martyrdom in 60 A.D.

St. Andreas' Day marks the opening of Christmas Markets, and many Midwinter customs and folk superstitions are connected to this day. It is the first of the "knocking nights" known as Klöpfelnächte.

"Anglöckeln, Klöpflgeher, Glöcklisinger, Kurrendesänger, Bosseln" describe the groups of Christmas carolers or star-singers from various German regions who walk from door to door. After knocking (klopfen) or ringing the doorbell (Glocke) they sing for gifts. Some sources say that this symbolizes the angel bringing the message of Christ's birth to Mary; others ascribe it to earlier rituals of driving out evil spirits with loud knocking sounds.

Whatever the symbolism, for a long time it was one of the few ways by which the poor could earn a meal during the winter season. The duration of this tradition varies widely and could last until Epiphany (January 6). Today it is mostly performed by children, who try to collect gifts for themselves or donations for some charity.

St. Andreas is also important as the patron saint of marriage and fertility. St. Andreas day was a traditional time of "oracles" for girls who prayed to the saint for a husband and wished to receive some visible assurance that their prayers had been heard. For example, a girl wishing to marry could throw a shoe at a door around midnight on November 29. If the toe of the shoe pointed in the direction of the exit, then she would marry and leave her parents' house within a year. Or she could peel a whole apple without breaking the peel and throw the peel over the shoulder. If the peel formed a letter of the alphabet, then this suggested the name of her future groom. So, the night of November 29 was the night to look into the future and find out one's fate.

*Note: Photos thanks to Arno and Ewald Meyer
Posted by Kathy, the Single-minded Offshoot at Saturday, December 31, 2005