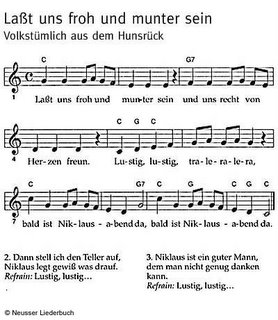 
In my post about some significant holidays in the Christmas season, I did not mention St. Nicholas Day, or «Nikolausabend», perhaps because it was so familiar to me. This was not a little known saint's day in my small, German-American town. On the evening of December 5, St. Nicholas always came. Dad would knock on the door and ring sleighbells. He didn't dress up as St. Nicholas because he knew I was too scared to go to the door when he knocked. I would quiver with a mixture of fear and excitement and pray that my mom would not open the door until the good saint had gone on his way. By the time Mom looked outside, St. Nicholas had disappeared, leaving a brown paper bag filled with candy on the doorstep.

Ernst Mettlach, who grew up in the Trier region, says that as a child, St. Nicholas eve, the "Nikolausabend" was a major event in the year. He left that comment about my "The Magi and More" post, telling me that he wished the feast of St. Nicholas had been included. Since Ernst provided me with some very good information and photos as well, and because "Nikolausabend" is such an important German holiday, I am writing about it as a separate post, rather than slipping it into my original post. 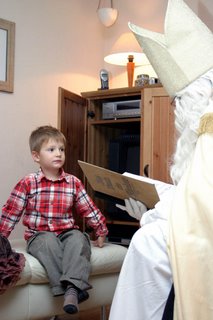 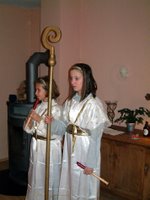 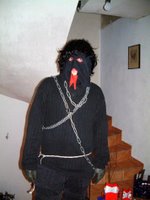 FROM ERNST: On the evening before 6th December, a man dressed as the holy bishop St. Nikolaus, sometimes accompanied by one or two angels, and the "Pelzebock", who is a fierce looking fellow dressed all in black, would go from house to house visiting the children. The "Pelzebock" - the word comes from the bible word Beelzebub (Mt 12,24, Mk 3,22, Lk 11,15), was a god of the Philistines. He is considered the highest demon or devil in the bible. (In other German regions the "Pelzebock" has names such as "Knecht Rupprecht," "Budelfrau", "Krampus", and "Pelznickel". The Pennsylvania Dutch in America called him "Belsnickel".)

The "Pelzebock" is the servant of Nikolaus, and the chains around his chest reassure the children that he is tamed. He carries a sack with presents and birch sticks inside. Usually he waits outside of the door and only comes in to hand out the presents. He has a big book in which are counted all the good and bad things the children have done throughout the year. Tradtionally, he brings a "Nikolausteller" ("Teller" is the German word for plate) or "Nikolaustuete" (a "Tuete" is a cone-shaped paper bag), filled with sweets, nuts and oranges, for each child. The children are asked to sing Nikolaus songs and recite Nikolaus poems.

SOME ADDITIONAL BACKGROUND:
"Der Nikolaus", as he is called in Germany, is said to have been the Bishop of Myra in Greece in about the 4th century. The historical Saint Nicholas was venerated in early Christian legends for saving storm-tossed sailors, defending young children, and giving generous gifts to the poor. Many of the stories about Saint Nicholas are of doubtful authenticity. One of the legends that grew up about him was that he helped a father and his three daughters who were too poor to have a dowry. The father was about to turn his daughters out on the street to make a living. The kindly saint, on three consecutive nights, entered their home in secret, leaving a gold ingot on the hearth so that each daughter could have a husband. In variations on the story, the saint dropped the gold down the chimney and it landed in the shoes on the hearth or in the stockings that the girls had hung near the chimney to dry. Over the centuries, these legends spread throughout Europe, emphasizing the saint's role as a traditional bringer of gifts on the eve of his feast day, Dec. 6. Martin Luther, hoping to put emphasis on the birth of Christ instead, initiated the custom of gifts brought by the "Christkind" (Christ Child) on Christmas Eve rather than the Nikolausabend gifts. But the saint, who was called Sankt Nikolaus in Germany and Sanct Herr Nicholaas or Sinter Klaas in Holland, prevailed as a gift giver, and the Nikolaus gift-giving tradition survived the Reformation. In Germany St. Nicholas is portrayed wearing a bishop's robes and the tall miter headdress. He carries a crozier, the hooked staff which symbolizes his office as a shepherd of men.
Posted by Kathy, the Single-minded Offshoot at Friday, January 13, 2006