From Field and Garden In the Trier region, a very old tradition survives to this day. Every year at Mariä Himmelfahrt on August 15 (the feast of the assumption of Mary into heaven), herbs of many kinds are formed into a bouquet or spray. They are brought to the parish church, where they are blessed. For that reason the Feast of Assumption is often called "Krautwischtag" or, literally translated,"herb bunch day." After the blessing, the herbs are brought home to decorate the family crucifix or taken into the stable to prevent illness of the cattle.

This custom indicates how important the herbs and plants of gardens and fields were to our ancestors, the farmers and villagers who lived in the region. Those who emigrated must have taken special care to bring many of their seeds with them to the new country.

*HERB TREASURES ALONG THE HIGHWAYS AND BYWAY 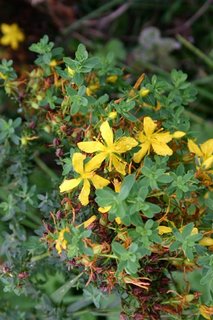 The Johanniskraut (Hypericum perforatum), St. John's Wort is a very common native, wild plant in the Trier region. It is a powerful herb which is anti-inflammatory, astringent and antiseptic. The mature plant has blossoms that leave the fingers red when rubbed. These blossom are placed in olive oil in a dark glass jar. It makes a very effective lotion for burns or it can be cut and dried to make a herbal tea. In alternative medicine it is considered a remedy for depression. 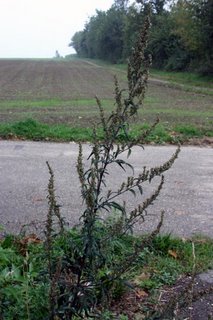 Beifuß or mugwort (Artemisia vulgaris), is also a very common regional plant. It grows along roadsides. Although it is considered a weed, people sometimes use it to spice greasy meat dishes such as the traditional St. Martin's Day goose. It contains Thujol, a stimulant similar to camphor.

Closely related and also common is Wermut or absinth wormwood (artemisia absinthium). It is used to produce a typical Eifel region liquor called "Badralsem." It is not distilled; instead the herb is soaked in alcohol. The resulting liquor is very bitter, and it is drunken as a digestive.

Often found growing together with Artemisia is the Rainfarn or common tansy (Tanacetum vulgare). It was thought to be useful in deworming cattle or, as late as 1931, as a brew for expelling worms in children. 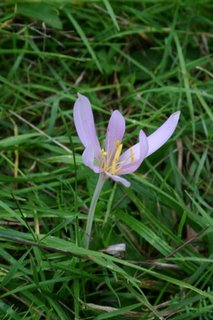 As would be expected, not every flowering herb along the road or in the meadows of the Trier region could be used in cooking or healing. The Herbstzeitlose which is commonly called the autumn crocus (Colchicum autumnale), grows wild. It's pretty appearance masks its highly poisonous nature. The settlers were, I'm sure, glad to leave it behind.


*A FEW CULTIVATED TREASURES OF YESTERDAY - AND TODAY 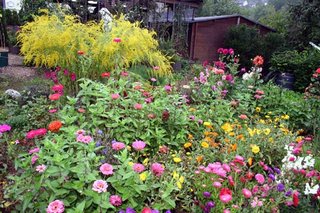 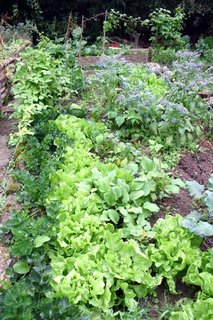 Almost every house in our ancestors' villages would have a garden, what is called the farmer's garden or "Bauerngarten." It represented a part of the owner's living space. It combined both practicality and beauty. Its vegetables were vital basic nutrients and by growing medicinal plants such as elderberry (for feverish colds), arnica for open wounds, peppermint and camomile for digestive problems, it became an apothecary as well.

Wattle fences (rods or stakes interlaced with twigs or branches) to protect the "Bauerngarten" had been in use since the Middle Ages and were common up until the late 19th century. Neither nails nor wire were needed in order to make such a garden fence. At the Rosheiderhof Open Air Museum in Konz, (picture at top of post) there is an example of such a fence made of twisted hazel sticks. The fence served to keep out grazing animals and chickens which ran freely around the village. Some gardens might have paths covered with tanning bark (oak bark) which kept down weeds because of the bark's high acid content. 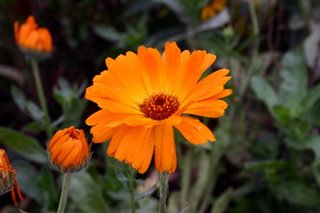 The Ringelblume or Pot Marigold (Calendula officinalis) was always found in the farm garden. It is used to produce a salve against wounds of all sorts as well as being decorative.

The Möhre/Karotte or carrot (Daucus carota subsp. sativus) has many names in Germany. In the Trier region it is called Möhre or Muart in dialect.

The Lauch or leek (Allium porrum) is eaten as vegetable or used as a spice. It was planted beside the carrots to protect them from bugs and mice.

The native bean of the region is the Ackerbohne or fava bean (Vicia faba). It is called Dicke Bohne in the Trier region, It has a very distinctive flavour and is a typical food in the region. In Luxemburg, smoked pork with broad beans or "Judd mat Gardebounen" is a national dish.

The Garten- or Stangenbohne (Phaseolus vulgaris) was an immigrant from America. This common bean was brought to Europe by the Spanish in the 16th century and became widespread in the region. The Schnippelbohnensuppe (cut bean soup) is a traditional dish in the region.

The Schnittlauch or chive, (Allium schoenoprasum) was and still is widely used in cooking. In the regional dialect it may be called bratzel or bretzel. Other herbs of the Bauerngarten: Bohnenkraut/Summer savory (Satureja hortensis), Dill (Anethum graveolens), Lorbeer/Bay laurel (Laurus nobilis), Kamille/German Chamomille (Matricaria recutita).

Posted by Kathy, the Single-minded Offshoot at Wednesday, January 24, 2007