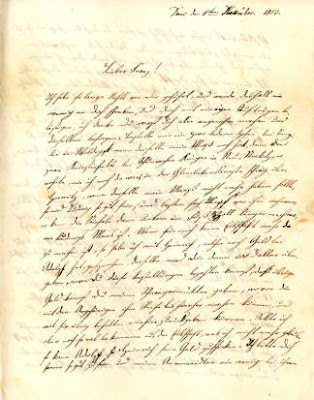 This year the small village of St. John, Wisconsin will celebrate the 150th Anniversary of its parish church, established in 1862 and dedicated to St. John the Baptist.  Since this is a blog about the life and customs of villagers in Kreis Saarburg Germany and the small villages of Irsch, Zerf/Oberzerf, it may seem strange that I am writing a post about an American Catholic church.  But this is not just any Wisconsin Catholic community and church.  It became the new home for a very significant  chain emigration from the village of Irsch to the village of St. John.

I want to write about a generally unknown and uncelebrated early settler, perhaps the earliest person of all to take his family and leave Irsch, Kreis Saarburg, and settle in St. John, Town of Woodville, Calumet County, Wisconsin.  Unfortunately, he has somehow been missed when, over the years, the storis of this settlement have been written

There is another reason for writing this post beyond the identity of the man who is probably the first settler of St John.  It is also a great example of the effect on emigration from Germany of the “America Letters,” as mail from the United States came to be called.   When such letters crossed the ocean to be read by the relatives and villagers of the old homeland, many people who had been doubtful about leaving now dared the trip across the Atlantic to a strange country.  At least one of those letters, long lost, surely came from a resident of Irsch who settled in a place he liked and told others in his German village about it.

I was not paying any attention to the St. Gervasius and Protasius church records of Philip Thomas and his family when I searched for my Irsch ancestors.  I was trying to figure out why Johann and Magdalena Meier had chosen to live in tiny St. John,Wisconsin.  They had selected this remote area of Wisconsin to be their home for the rest of their lives.   Other emigrants from Irsch did the same thing.  It was good farming land, of course.  But why this farm land?

There was one reason that seemed likely.  Someone in the group of families from Irsch who became the first link in the chain of emigrants from the village of Irsch, sailed in March of 1861 to settle in St. John.  Someone must have had a relative who would be waiting for them, I reasoned, someone who had given advice on how to make the trip based on experience.  In other words, a former Irsch resident who was writing "America letters."

I searched the centennial books created for the St. John Parish anniversatries in 1962 and in 1987 to find a name that was not on the list of residents, as recorded by the immigration officials in Saarburg, who had traveled to Wisconsin in 1861 and 1862,  These people were listed as the very first emigrants from Irsch.  But I doubted.  Like Adrian Monk, the quirky but amazing detective on one of my favorite TV mysteries, I tried to find motives and clues others did not recognize; someone who had arrived before 1861, who had not been listed in the records of the time (the careful filing of documentation only started about 1860-61) and who was now hiding in plain sight, waiting to be discovered.

I started with the 1860 Federal Census of the United States for the Township of Woodville in Calumet County.  This was in the days before so many records were digitized and available on the Internet.  I stuck my head into a dunce-cap microfilm reader at the library and scanned the Town of Woodville census line by line.  I believed I would recognize a family surname from Irsch.  I had spent so much time reading and rereading the microfilms of St. Protasius and Gervasius Catholic Church at LDS branch libraries that I had most of them memorized.  It was as if I myself had been born in that town and could say, “Yes, that’s an Irsch name all right.”  I had to search the census twice but on the second try, I found a name I thought might be the one I was looking for: a farmer named Philip Thomas, born in Prussia.  He had a wife and children and, as I thought, all had been baptized in Irsch.

Philip Thomas was born in 1808 in Beurig.  He was a Landwirt (a farmer who owned land) in the village of Irsch, married to Anna Britten of Irsch.  Philip was 48 years old, hardly the time a man might have been expected to leave the village he had resided in for so many years and make a harrowing trip.  Why did he do it?  His good luck in raising several children beyond the time of most danger for early death, worked against his staying in the Heimat.  He had four sons and two daughters.  His land holdings in Irsch, probably not very large, would by law be divided into six parts after his death, both sons and daughters inheriting.  This was a law imposed on the area when they were a part of France and never changed after Prussia took power.  Like so many emigrants, lack of land for the children to inherit and survive was most likely the motivating factor for Philip Thomas' decision to leave Irsch.

The Philip Thomas family arrived in the United States in June 1856 according to Philip's first papers in which he swore his intent to become a citizen of the US, and renounced the emperor of Prussia.  The Calumet County courthouse is where he filed his petition for citizenship on 1 April 1859.  In July 1860, the US Federal Census of Wisconsin lists him with $1,800 in real estate and $250 in personal estate in the Town of Woodville, Calumet County Wisconsin.

Philip’s wife, Anna, was the sister of one Heinrich Britten who still lived in Irsch.   The two families probably maintained contact through letters.  Philip would have described the availability of good, low-priced farming land with lots of trees that would leave the soil rich once the land was cleared.  It would also would provide logs for houses and barns. Evidently Heinrich began planning to take his family to Calumet County to join his sister and brother-in-law,  sharing the content of these America letters as well as his plans with his neighbors.  These families, including the family of Johann and Magdalena Meier, my 2nd great grandparents, decided to emigrate as a group.  In March 1861 they began their travel together from Irsch to the Port of Le Havre in France on their way to join the Thomas family.

I cannot produce any letters that Philip Thomas sent back to Irsch.  My evidence, I know, is circumstantial, but similar letters are recorded in a book called News from the Land of Freedom: German Immigrants Write Home, edited by Walter D. Kamphoefer, Wolfgang Helbich, and Ulrike Sommer.

I think I may, with my circumstantial evidence, get Philip Thomas and his family noted among the first settlers from Irsch to St John.

Posted by Kathy, the Single-minded Offshoot at Sunday, April 28, 2013