The Nursing Madonna of Beurig 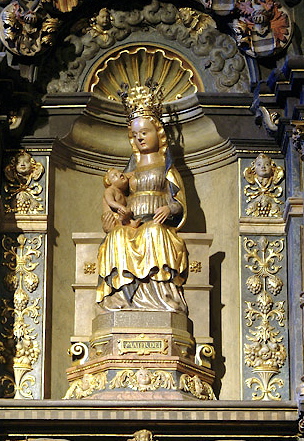 This amazing Madonna in its Catholic pilgrim church was unknown to me until 2002 when Ewald Meyer brought me from his home in Irsch to Beurig to visit it. That was a trip of about one mile. Herr Meyer had grown up in Beurig, which in former centuries, (sometimes only 88 people) would rightly have been considered a tiny village. As early as the 16th century, however, the church in this small vilage was as much a pilgrimage site as Lourdes, Fatima, and Santiago de Compostela. It was visited by numerous pilgrims from neighboring countries. All of my Rhineland ancestors must have known this pilgrimage site, visited it, most likely as part of a village pilgrimage, and been awed by it (The hardship of their pilgrimage was not impressive as most lived within 10 miles of it). Ewald Meyer, as a resident of Beurig, regarded the pilgrim church and the Madonna that it was built to protect as a source of pride for the village of his birth. A few years ago he wrote an extensive chapter about it in the book, Beuriger Lese- und Bilderbuch.

On the day we visited, Herr Meyer described, in German, the interior of the church and the location and size of the former Franciscan abbey. That order of priests and monks had been put in charge of the pilgrimage church in the 17th century. My German was not good enough to understand a lot of the detail in his explanation. But I did understand and laugh when he called my attention to a corner across from the entrance to the church. It was, he said, the former location of a bakery, because the pilgrims had been fasting and were very hungry when their pilgrimage was over. Those bakers understood how to select a good market place for their breads.

I really didn't appreciate the significance of the Beurig Madonna during that first visit. She was dwarfed by the fine late Gothic-style church built for her. I knew she was venerated and that some people were said to have experienced miracles through her intercession after they completed a pilgrimage to this site. I didn't look closely at the statue, carved by an unknown artist, on that first visit, and I completely missed something rarely seen on any statue of the Virgin Mary - her uncovered breast, about to give nourishment to her child, Christ, as he looked up into her face.  The statue is small in proportion to the tall altar piece in which she rests.

According to legend, the statue of the nursing Madonna - in Latin called "Madonna lactans" - was discovered by a miller’s apprentice. He found the wooden figure in the branches of an oak tree, which was being propelled downstream during a flood of the Saar River. This is said to have happened in the year 1304, which is also regarded as the first year of pilgrimage. The moment the villagers heard the story, they flocked to visit this miraculous Gnadenbild (image of the Virgin and Child).

A printed brochure once distributed to visitors to the pilgrimage site explained the story with a variation as follows: A miller's lad was making his way home through the Kammerforst (a woodland at the border of Beurig) when the evening church bells rang out. The bell known as "the angel of the Lord" rang out and was answered by a heavenly voice that led the boy to the statue, which was in the branches of an oak tree.

The representation of the nursing Virgin seems to refer to the Gospel of Luke (11:27) "Happy the womb that bore you and the breasts you sucked." However, this representation was not considered proper with the Catholic Church authorities of the times. Very early on it was "veiled" so that only the head of the baby could be seen. The rest of the child's body and the entire body of the Virgin Mother were covered in a very ornate dress of silk. From 1512 until 1955, the Madonna of Beurig looked very similar to other religious statues of the Madonna.

The restoration of the original icon was done in 1955 under Pastor Weber.  It was the first time in almost 500 years that a Beuriger congregation would see the original grace and expressiveness of the Virgin Mother's image in "unclouded beauty," with her right arm holding the infant as safely as if he sat on a throne. The intimate relationship between mother and child is evident and touching as I discovered in my second visit to the Madonna side chapel.

Mary's crown was not a part of the figure until the early 20th Century.  Retired Mayor Nicholas Ritzler wrote in 1912 in his History of the Castle and Town Saarburg: "A proof of the high veneration for the Beuriger Madonna gave rise to the solemn coronation a few years ago..." His description is probably based on the Jubilee pilgrimage of 1907.

Pilgrims came immediately after they heard the news of the discovery of the miraculous image. The first pilgrimage chapel was a small building of clay and wood. In 1330 a Marian society was established, which continued in existence until 1803. In 1479 the wooden chapel was replaced by a small stone church, but this too soon proved too small for the crowds. An impressive pilgrimage church was built between 1512-16.

At the start of the 17th century, pilgrimages to Beurig continued to increase. The parish priest was overwhelmed by looking after all the pilgrims. To provide him with support, in 1609 the Franciscans of the Cologne Order took over pastoral care of the pilgrimage/pilgrims and between 1615-28 they built an abbey with a place for the pilgrims to be housed during a short stay. The Franciscans remained in Beurig until 1803. This was a time when Napoleon ruled; he had pushed the border of France all the way to the left bank of the Rhine. This abbey as well as most others within France were abolished as part of Napoleon's secularization of all Catholic Church properties. After the departure of the Franciscans, the pilgrimages ceased, the abbey assets were auctioned off by the French, and the church was gifted by Napoleon to the village in Beurig as their parish church. Around the middle of the 19th century the concept of Beurig as both a parish and a pilgrim church was re-established; and pilgrimages came to life again.

Posted by Kathy, the Single-minded Offshoot at Monday, January 28, 2013