This is an unusual subject for my blog which usually has focused on peasant life. However not every person in Kreis Saarburg was part of the peasantry or lower classes, In Saarburg, the largest city of the Kreis, there were houses designed for the upper and middle classes, like Nikolaus Valdenaire who had both an estate near Konz and a fine home in Saarburg called the Kuno Tower. These upper and middle classes interacted with the lower classes - buying their produce, hiring their children as servants and the adults as workers in the taneries or the bell factory, to name a few. To the people of the surrounding villages, Saarburg was an extraordinary place. This was where people who did not have to struggle just to feed their family lived in houses that seemed like palaces. Here you would find the doctors, the chemists, the government officials, the owners of factories. Their homes would be far different than the little farmhouses most of our own ancestors lived in, but they would also be nothing like the fine interiors of the dwellings of the nobles in cities like Bonn or Cologne.

In Germany and Austria, the 19th Century saw the development of what is often called the Biedermeier period.  It was the time when the middle class began to grow and gain importance.  These were the years that started with Prussian rule in areas formerly French or independent city states.  It faded after the German revolution of 1848. This Biedermeier period influenced literature, music, and visual arts but especially interior design. The middle class enjoyed this humorous character, Biedermeier, in a period of strict government control. "Papa Biedermeier," a worthy, bourgeois-minded fellow was a humorous character featured in a running series of verses written by a country doctor and a lawyer. Gradually the name Biedermeyer came to represent the period when artists of all kinds, including architects and talented craftsmen, moved toward simplicity and moderation in their work. It was a mood rather than a strict period of time, says an article from Wikipedia.

Compared with the Empire furniture style of the nobility before and during the time of Napoleon, the rising middle class chose a new direction. The furniture used a style that emphasized the grain of the wood rather than having elaborate carving and curlicues. Pale woods like pear, birch or cherry woods were preferred over the darker woods like mahogany. 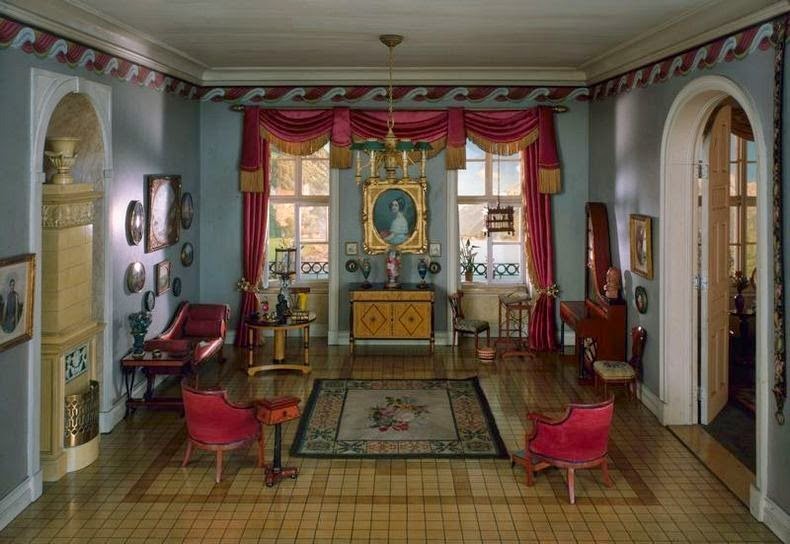 The comparative emptiness of furniture in this room is also typical of the middle-class Biedermeier style although sometimes there was imitation of the costly techniques that were used for the furniture and floors of the upper class. Expensive inlay work, for instance, could be imitated very easily by using a stencil of the pattern to stain floors or furniture.

The Biedermeyer period can be applied to many fields - literature, music, and visual arts. A library where books could be kept and read by members of a middle class family tended toward the writings of the Biedermeyer writers. Biedermeier designs were simplified forms of the French Empire, Directoire  and some 18th-century English styles, and were often elegant in their utilitarian simplicity. Chairs and sofas show curved lines, frequently graceful, but sometimes exaggerated into swellings and contortions. Light-colored native fruitwoods were once again used in this library, with contrasting bands of black lacquer which often effectively substituted for the costly ebony of Empire pieces.

Biedermeier designs could be quite simple.  At their best, cabinets and other large pieces were handsome and severe in line and surface.

I am certain that my Kreis Saarburg ancestors never lived in a house furnished in the Biedermeier style.  But since middle class families often had enough money for servants, my 2nd great grandmother or one of her sisters or one of your ancestors could have worked in a Biedermeier dwelling for the time before their marriage, helping them to afford to buy more modestly made chests and cabinets filled with the things needed for their simple dowry.  They would have dusted and polished the Biedermeier curves of the pear wood furniture, the like of which they knew they would never own.